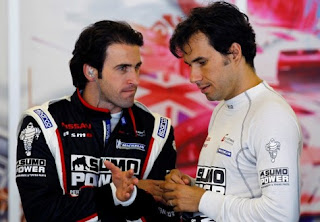 Nissan's Sumo Power squad were pleased to show their potential during the 2011 season opener at Abu Dhabi, despite moments of misfortune during the weekend preventing them from taking the points their performance had warranted.

The team had started the weekend in fine fashion as the Brazilian pairing of Enrique Bernoldi and Ricardo Zonta in the No. 20 GT-R collected fourth place in the Qualifying Race. Teammates David Brabham and Jamie Campbell-Walter in the No. 21 car meanwhile finished eighth, despite a delay during their pit stop which dropped them from fifth to 11th.

The team, carrying stickers in support of Japan following the country's recent disasters, looked set for an even better finish in the evening's Championship Race when Bernoldi pulled off a magnificent start to jump from third to the lead by the first corner - holding position until the pit stop window opened.

Misfortune again struck the team however as a pit lane collision between the No. 20 GT-R and the No. 41 Marc VDS Ford GT of Frederic Makowiecki and Maxime Martin - which was later handed a drive through penalty for the incident - dropped them out of the lead and ultimately out of the race due to damage.

After a difficult start to the race, the No. 21 GT-R of Campbell-Walter and Brabham bounced back to ninth at the finish, leaving the team rueing moments of misfortune - but also optimistic that their performance had merited stronger results.

“To get fourth when we had a few problems in the first race was good," Enrique Bernoldi explained. "To be able to go into the lead straight away (in race two) was fantastic - the timing was just right, I saw the gap in front and just drove through it. It was such a shame that we were in a good position for the win and then for Ricardo to be hit in the pit-lane, but at least we know we can be at the front now.”

Team-mate Ricardo Zonta echoed Bernoldi's thoughts, saying: "The team did a great job (giving) us a quick car. Enrique was able to take the lead from the start, but I could not believe that the Ford drove into me in the pit-lane. I don’t know what he was thinking, and of course it put me out of the race.”

In the No.21 Nissan, David Brabham hailed an educational debut in GT1 racing, saying: "Although I’ve competed in lots of GT races, this is my first time in GT1 and the way some of the things work in this championship is different than what I’ve been used to in others. The car was the best it’s been in the championship race and I was able to set a string of respectable lap times, so with a bit more work and spending more time in the Nissan, I think we have a good package.”

Team Manager Hiroki Furuse said he was pleased with the team's weekend, explaining: “Race one was the first for many of us in the team and therefore we were very pleased to score a top-four finish. Before we came to this race, we said we would be happy to take away a few points – and I’m pleased to say that we achieved our aim. We showed the potential of our team and the potential of our Nissan GT-Rs.”