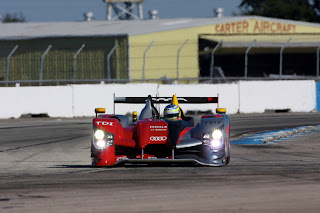 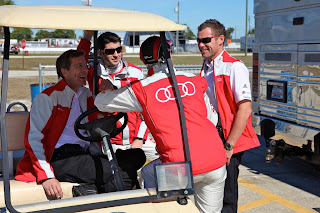 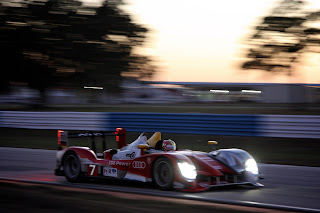 Ingolstadt, March 11, 2011 - Audi starts the 2011 sports car season in the 12 Hours of Sebring on March 19. Making its final appearance is the Audi R15 TDI, which had to be modified to comply with the new regulations and which carries the project name "R15 plus plus" internally. Timo Bernhard/Romain Dumas/Mike Rockenfeller (D/F/D), last year’s Le Mans winners, as well as Dindo Capello/Allan McNish/Tom Kristensen (I/GB/DK), Le-Mans winners from 2008, drive the two diesel race sports cars.

A long sports car season starts for Audi Sport Team Joest in March: On the agenda up to November are seven races, the Le Mans test weekend and numerous tests with the Audi R15 TDI and the new Audi R18, which does not, however, race at Sebring. So as not to interrupt preparations for the 24 Hours of Le Mans on June 11/12 the test and development program with the R18 continues to run in parallel to the opening round of the Intercontinental Le Mans Cup 2011 (ILMC) season.

As a result one car in particular bids farewell at the 12 Hours of Sebring, a car that made its debut here two years ago: the Audi R15 TDI. It celebrated its 2009 premiere with a victory - the ninth for Audi in this traditional event in US state of Florida since 2000.

For the second appearance at Sebring the diesel racing sports car competes under completely new conditions. New technical regulations from the Automobile Club de l’Ouest (ACO) are valid in 2011, for which Audi has developed the "closed cockpit" R18. Older models like the R15 TDI may only compete in heavily modified form with greatly restricted engine power. Just how these cars will fare against the new models remains to be seen.

The new LMP1 prototype regulations limit engine displacement for new models such as the Audi R18, which will contest its first race in May, to 3.7 liters. Older cars like the Audi R15 TDI will be slowed down accordingly. To this end, the 5.5 liter V10 engine in the Audi R15 TDI must now draw air through two intake-air restrictors of 33.5 millimeter diameter - this is four millimeters less than before. At the same time the boost pressure is reduced by 23 percent to 2,000 millibar - 2,590 millibar was allowed before. The fuel tank may only hold 65 instead of the previous 81 liters of diesel, the fuel flow restrictor in the autonomous refueling tank was also reduced by five to 28 millimeters. "The drivers felt the engine restrictions very clearly during the test in Florida. They miss several dozen horsepower," explains Ralf Jüttner, Technical Director of Audi Sport Team Joest. "The reduction in tank volume sounds drastic at first, but the engine obviously also consumes less. The slower flow rate from the external tank means that pit stops will certainly not be any shorter despite the smaller fuel tank volume."

The Audi R15 TDI makes its farewell appearance in Florida in the hands of two successful driver line ups. Timo Bernhard and Romain Dumas, who won at Sebring in 2008, share the car with start number "1" with Mike Rockenfeller. Dindo Capello/Tom Kristensen/Allan McNish, the Sebring winners in 2009, drive the "2" numbered Audi.

Two new partners are also part of the team for the first time at Sebring: Lining up alongside Bosch, Mahle, Michelin and TAG Heuer to partner the Audi sports car program from 2011 are Alpinestars, specialists for motorsport and extreme sports clothing as well as street wear, and lubricant manufacturer Castrol. With Castrol a familiar face returns to the side of Audi Sport; the two companies were already very successful together in competition as partners in the DTM, super touring cars and in rallying.

Topical points of interest at the weekend

• How fast is the R15 TDI, which should actually be called "R15 plus minus" after being modified to comply with the new regulations?
• Can Audi exploit the reliability of the established R15 TDI around the tough Sebring track with its experienced drivers on board?
• How will the balance differ between the modified 2010 cars, the Audi R15 TDI and new LMP1 models?

Dr. Wolfgang Ullrich (Head of Audi Motorsport): "Sebring is the circuit on which up to now practically all of our new sport prototypes have made their race debuts - and in doing so have always won. For the R18 project it would have been a monumental logistical task to compete at this early stage at Sebring. This is why we now bid farewell to the R15 TDI. With the R15 TDI having been modified again we know that we do not have the same base as each opponent competing at Sebring with a new LMP1. Having said this we still want to score as many points as possible for the Intercontinental Le Mans Cup. During the 12 Hours of Sebring there are many other factors in addition to the cars that dictate how things look at the checkered flag: the normally hot weather, the heavy traffic, specific race situations with the typical full-course yellows, the performance of the team and obviously also our experienced driver squads. This is why anything is also possible at this race with an ‘old’ car."

Ralf Jüttner (Technical Director Audi Sport Team Joest): "I’m delighted that we are taking part again. It really was a strange feeling in 2010 to test at Sebring but not to participate in the race. Now our sports car season begins in Florida, where we want to give the final evolution of the Audi R15 TDI a resounding send off. The car has been modified to suit the new regulations and competes against other modified ones, but also against new cars. When we tested this evolution of the R15 TDI together with the R18 we had a good impression of both cars. In addition to the pace at Sebring it is also a question of consistency and well developed technology. And not forgetting that five of our six drivers at Sebring have won the race once in the last three years."

Facts and comments from the Audi drivers

Timo Bernhard (30/D), Audi R15 TDI #1 (Audi Sport Team Joest)
• Celebrated overall victory at Sebring in 2008
• Races together again with his Le Mans winning team mates
"My goal to contest the ILMC came true. This is the result of excellent cooperation between Audi and Porsche, for which I am very grateful. The 12 Hours of Sebring marks the opening event of this program. With 59 cars - including many slower GT cars - on a track only five kilometers long, it’s important to have good all round visibility. Many corners are quite unique and also difficult to read on entry. To this end I am quite grateful to be racing in the open Audi R15 TDI. I still have good memories of Sebring 2008 when Romain Dumas, another team mate and I celebrated overall victory."

Romain Dumas (33/F), Audi R15 TDI #1 (Audi Sport Team Joest)
• Returns to the scene of his 12-hour victory in 2008
• Views Sebring as one of the most important sports car races
"Sebring is always something very special. The 12 Hour race and the 24 Hours of Le Mans are the two most important sports car races in the world for me. Traditionally there are many safety car periods in Florida due to the high number of competitors. Consequently the race is usually completely open until the very end. Bad for those in the lead that repeatedly lose their advantage, good for those chasing behind! I expect high temperatures. Also, the bumpy track is very hard on the material and us drivers. It’s also a question of reliability, and in this respect the Audi R15 TDI certainly has nothing to be ashamed of."

Mike Rockenfeller (27/D), Audi R15 TDI #1 (Audi Sport Team Joest)
• Starts for the first time since his Le Mans victory in an Audi R15 TDI
• His season with 16 races kicks off in the USA
"To start the season at Sebring is something very special. We can expect an enormous field of starters. The key to a good result will be getting through the traffic without problems for 12 hours. We’d certainly like to present the Audi R15 TDI with exactly this in its final outing. For Timo (Bernhard), Romain (Dumas) and me it is also an important part of our preparation to compete once again as a trio of drivers. After all we’ll also face the competition in this formation at Le Mans."

Dindo Capello (46/I), Audi R15 TDI #2 (Audi Sport Team Joest)
• Has already recorded four victories in the 12 hours Sebring
• Won the endurance classic for the first time 10 years ago
"I have a lot of fond memories of Sebring. I contested my first race with an LMP sports car with Audi at this track. Michele Alboreto, Stefan Johansson and I claimed a podium finish with the Audi R8R - a great debut. Exactly ten years ago I celebrated my first victory, together with Laurent Aiello and Michele. It was his final victory in his last race for Audi. I will fondly remember a photograph I have of us on the podium forever. Now we race for the last time with the R15 TDI which started its winning ways at Sebring in 2009. The competition comes with completely new cars. I’m intrigued to see just how good we are at the end."

Tom Kristensen (43/DK), Audi R15 TDI #2 (Audi Sport Team Joest)
• Is the most successful driver ever at Sebring with five victories
• On the debut of new Audi race cars in 2000, 2006 and 2009 steered the winning car on each occasion at Sebring
"I still love to race in the USA, and especially at Sebring where the atmosphere is incredible. The actual number of Sebring victories is of little interest to me in my active career. Our new season starts here and certainly a long, long way away from the European winter. The race is always difficult. The circuit is an incredible challenge - according to old tradition and very hard. Different types of tarmac and other surfaces, lots of bumps and corner apexes that you can’t see - the perfect recipe to test the reliability, performance and durability and stamina of car, team and drivers. We have already won here in the past with new designs, for example in 2000 with the Audi R8, in 2006 with the Audi R10 TDI and in 2009 with the Audi R15 TDI."

Allan McNish (41/GB), Audi R15 TDI #2 (Audi Sport Team Joest)
• Celebrated the R15 TDI’s debut victory two years ago at Sebring
• Has achieved a remarkable podium ratio in the 12 Hour race
"Tom (Kristensen), Dindo (Capello) and I scored a debut victory for the R15 TDI at Sebring in 2009, the R15 TDI recorded a fantastic Le Mans one-two-three finish last year while Tom and I narrowly missed taking another win in China last November. So we know what the R15 TDI is capable of and what defines its performance. I think we can challenge the opposition. Sebring is one of the toughest races held where both temperatures and humidity are high. I drove for the first time at Sebring in 1997. I have won the 12 Hour race three times and mounted the podium six times in total from seven starts. It has been a successful place for me to date. I aim to continue this trend in 2011."

The Audi drivers at Sebring

Allan McNish about Sebring: "The circuit is fast, demanding and bumpy. It requires 100 percent concentration. I like the facility because it’s an old style track. The track has hardly changed since Stirling Moss raced here for the first time in the 1950s. The track surface is bumpy and has several evil curbs. We are familiar with none of this in Europe, especially on the tracks where Formula 1 races are held. But it is for exactly this reason that Sebring has so much character. Also, the enormous number of fans ensures the atmosphere is electric."