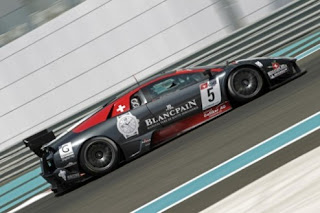 Nissan JR Motorsport pairing Richard Westbrook and Peter Dumbreck emerged triumphant in an extremely tight battle in pre-qualifying which saw the top four separated by less than one tenth of a second.

The No 37 All-Inkl Lamborghini of Dominik Schwager and Nicky Pastorelli had held top spot after 30 minutes of running, but were demoted at the halfway stage as the Nissan of Westbrook and Dumbreck made its charge - edging out the Lamborghini by just 0.038s.

Basseng and Winkelhock then came under pressure from the No 41 Marc VDS Ford GT of Maxime Martin and Frederic Makowiecki, breaking into the top three for the first time this weekend. Martin fell agonisingly short however, finishing little more than three thousandths of a second down the road in third.

The No 8 Aston Martin of Stefan Mucke and Darren Turner, pacesetters in free practice, finished fifth fastest ahead of Corvette Exim Bank Team China, meaning all five marques were represented in the top six finishers.

There was bad news for the no 40 Ford GT Marc VDS of Bas Leinders and Marc Hennerici, which was unable to complete a lap after the team opted to change the engine following free practice. Aston Martin's No 4 Hexis car was also unable to register a lap during the 80 minutes.