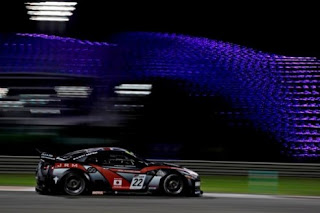 The weekend marked JRM's GT1 debut, with the team replacing Swiss Racing as the second Nissan outfit alongside Sumo Power, but they showed no signs of inexperience as they challenged for the lead in both races before emerging from Abu Dhabi second in both the Drivers' and Teams' Championships.

The lion's share of the points were collected by the British pairing of Peter Dumbreck and Richard Westbrook in the No. 22 Nissan GT-R, who enjoyed the most consistent results of any car in the field as they stormed to second place in both Qualifying and Championship Races.

The weekend started in fine fashion for JRM, with the No. 22 GT-R challenging for the lead for much of the second half of the race, eventually finishing little more than one second behind in the runner-up spot. Germany's Michael Krumm and Lucas Luhr in the No. 23 GT-R meanwhile came through from fifth at the start to finish third, meaning both cars would start from the first two rows for the main Championship Race.

Dumbreck almost made a perfect start in the No. 22 Nissan, eventually emerging in second behind Enrique Bernoldi in the sister Sumo Power No. 20 Nissan. Dumbreck hounded Bernoldi until the pit stop window, from which the team emerged in second - albeit six seconds down on new race leaders Hexis Aston Martin. Westbrook was able to close the gap steadily and by lap 27 was less than half a second behind, but was unable to find a way past and came home second.

Luhr and Krumm meanwhile had dropped slightly down the order at the start, before suffering misfortune when an on-track collision punctured the left-front tyre and caused suspension damage. Impressively the duo were able to carry on, taking the chequered flag in 14th.

"If someone had said to me before this weekend I would have two second places in my debut with JRM, I would have been delighted," Richard Westbrook enthused. "I'm pleased to say that everything is working well with Peter and the whole team, so I'm looking forward to Zolder."

Peter Dumbreck was bullish about his squad's prospects, saying: "You have to take the points that are on offer and that's what Richard and I did today - and we intend to do the same for the rest of the year. It was great to finish second in race one, and then my start (in race two) was so good I lifted as I thought I might have gone too soon! The car felt good so I could stay with Enrique (Bernoldi), but I couldn't make the move to get by."

Over in the No. 23 JRM Nissan GT-R, Lucas Luhr insisted he too was enthusiastic about the team's potential, saying: "I was very happy to finish in my first ever race in the Nissan. I was hoping the second race would be just as good, but when I got hit that was it for my race. However, because of the performance, I am optimistic about the rest of the season."

Luhr's team-mate Michael Krumm echoed his sentiments, explaining: "I was pleased with the strong performance of the Nissan GT-R, and to finish third in the first race. The second race was not as it should have been but even with the car not driving in a straight line I was still able to lap at a good pace, which shows the potential is there when everything is right.