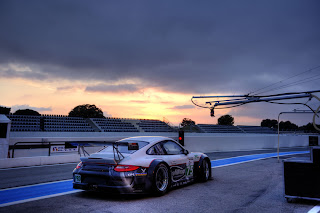 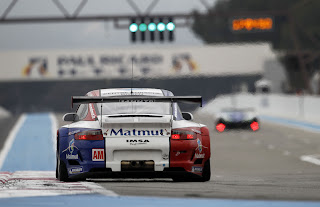 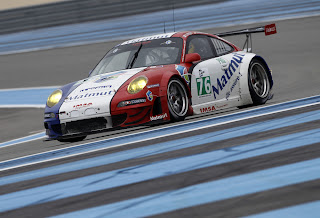 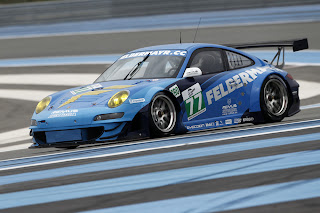 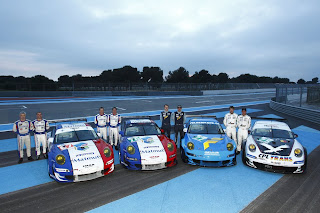 Stuttgart. Reliability is also the key in the extensively remodified Porsche 911 GT3 RSR. The two official test days of the Le Mans Series on the Paul Ricard circuit in southern France ran completely without any problems – only the biting cold, strong winds and at times damp track hampered the work. “The weather conditions pre-vented us from doing everything on our programme, but the first impressions of the new car are very good,” said Porsche works driver Marc Lieb (Germany) on behalf of all 911-pilots. “So we’re feeling confident about the upcoming season.” Lieb and his factory driver teammate Richard Lietz (Austria) will again make a bid to defend their GT title.

Alongside Lieb/Lietz driving for the German Felbermayr-Proton squad, further top pairings prepare themselves for the new season on the 5.791 kilometre race track. A new duo, Marco Holzer (Germany) and seasoned campaigner Marc Goossens (Bel-gium), conducted tests for the Belgian Equipe ProSpeed Competition. At the wheel of the 2011 version of the 911 GT3 RSR fielded by IMSA Performance Matmut was the new regular pairing with two works drivers Wolf Henzler (Germany) and Patrick Pilet (France). And in another 911 GT3 RSR (2010 version) of the French IMSA team is the new driver line-up with owner Raymond Narac and Nicolas Armindo (both France).

This season, the previous GT2 class is divided into two, with a professional and an amateur class. Whilst the three professional Porsche combinations compete in the newly-founded GTE Pro class with the further-developed 911, Narac and Armindo start in the GTE Am class. In this category, none of the latest cars are allowed and, in compliance with the regulations, one professional driver at the most is permitted per vehicle. With this, racing enthusiasts should also get a chance to win races in their class and to become champion.

In the extensive further developments of the Porsche 911 GT3 RSR, priority was given to the newly designed aerodynamics at the front and rear as well as changes to the suspension kinematics and engine. Clearly visible on the 911 GT3 RSR are the modifications to the front of the 2011 version. A new front lip provides higher down-force at the front axle. The front wheels are now wider with the rims growing from 11 to 12 inches giving additional grip and less of an understeering tendency.

“Such a test with a further developed and, in our case, brand new car should be ap-proached gradually,” explains Marc Lieb. “Are we going in the right direction? Can we use what we learned last year or do we have to rethink everything?” Lietz added: “The changes are quite noticeable. Above all, the turn-in has improved drastically. The 911 is now much more agile. All in all, it was about working towards finding a basis set-up for the races.”

Patrick Pilet was also totally satisfied with the 2011-version of the 911 GT3 RSR: “For me, the greatest difference compared to last year’s car is the improved stability when you drive over the track boundaries. This will mostly help us on circuits where there are many kerbs and not as flat as ones like Paul Ricard.” The IMSA Perform-ance teammate Wolf Henzler stated: “For today’s second test day we made some changes to the kinematics because the car had a slight oversteer yesterday. It was a move in the right direction, but a little too much. Obviously, there is a lot to learn about the modified car in order to get the best out of it.”

Marco Holzer was highly satisfied. Despite the test days focussing more on complet-ing a programme rather than lap time comparisons, the 22-year-old newcomer in the works driver squad was feeling very proud at being the fastest Porsche driver on day one. “The new aerodynamics at the front provides more grip at the front axle,” said the former Porsche-Junior, “and that suits me.”

And another happy driver was Nicolas Armindo, who switched to the international Le Mans Series after claiming the championship title of the Porsche Carrera Cup Deutschland last season. The Frenchman enthused: “The 911 GT3 RSR has more downforce than my Cup-911, and this makes driving even more fun. I’m absolutely over the moon that Porsche and Raymond Narac have given me this chance.” The French team fields a car in each of the GTE Pro und GTE Am classes this season, giving the squad the chance to win races and titles in both classes.

Contested for the first time in 2004, the Le Mans Series (LMS) is open for sports pro-totypes and GT vehicles. The regulations are based on the rules of the Le Mans 24 hour race. Five six-hour races are contested this season throughout Europe.

All race cars start together but are classified separately according to the class. Points are only allocated for placings in each class. Championship titles are awarded for drivers, manufacturers and teams in all five classes. In 2010, Porsche clinched all three titles in the GT2 class. In 2009 and last year, Porsche works drivers Marc Lieb and Richard Lietz won the GT2 driver’s title, with the team title going to Felbermayr-Proton. In 2008, Porsche won all titles in the LMP2 class.


Please note: Images of the Le Mans Series are available for accredited journalists from the Porsche Press Database under the internet address https://presse.porsche.de. On this website you can also register for the Porsche Motorsport SMS Info Service to receive the latest news and information from race tracks around the world via text messages.