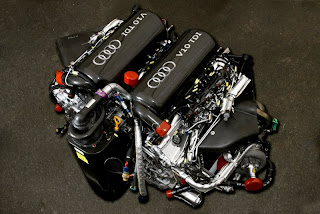 The combination of efficiency, engine power and reliability of the Audi power-plant was the crucial factor in the decision by the panel of judges, consisting of 50 international engine experts, that was used by a specialized British publishing house to select the award winner for the 2010 season.

The V10 engine was fielded for the last time in the 12-hour race at Sebring (USA), which attracted a crowd of more than 100,000 spectators. At the event, the guests of Audi USA enjoyed a very special view of the track as they were given the opportunity to watch the race from the two-story "Turn 1 Club" on the inside of the first turn.

Hans-Joachim Stuck was among the guests on location at Sebring. The Representative of the Volkswagen Group has won the American endurance classic a total of three times as a driver.

Used for the first time at Sebring were the new overalls for Audi drivers and mechanics produced by the Italian company Alpinestars.

Audi Sport Team Joest will stay for a few more days at Sebring. Starting on Monday, track tests with the car representing the latest build stage of the new Audi R18 will be on the team’s agenda. All nine Le Mans drivers and test driver Marco Bonanomi will take the wheel during the tests.

A new partner for Audi Sport: The logo of electronics specialist Sanyo has been emblazoned on the overall of Le Mans record winner Tom Kristensen since the race at Sebring.

Allan McNish participated in the Go Green Auto Rally in Miami on the weekend before the 12-hour race at Sebring. At the wheel of an Audi A8 he explained to visitors how the adoption of a particular driving style can significantly improve fuel economy in normal road traffic.

Triumph for the Audi R8: The Briton Andy Wallace at the wheel of the most successful LMP1 car of all time won a race for historic vehicles staged as part of the supporting program for the 12-hour race at Sebring.

Audi "factory" driver Dindo Capello, who was awarded the "Golden Helmet" of the Italian "Autosprint" magazine, was the guest of honor at the "Formula Monza" presentation at the beginning of March. The Italian climbed into the cockpit of the single-seat racer himself to do some demo laps.

The recovery of Mattias Ekström, who injured his left wrist in a sporting accident, continues to progress as planned. On Wednesday the Swede will have X-rays taken again in Zurich. "The plan is that afterwards I will be able to take off my cast," said the two-time DTM Champion.

Rahel Frey and Martin Tomczyk on Thursday paid their first visit to Audi Sport Team Phoenix for which they will compete in the 2011 DTM season. Team director Ernst Moser personally took his two drivers on a tour of the team’s facilities near the Nürburgring. At the beginning of April the first track tests with their new team are scheduled for both racers at the EuroSpeedway Lausitz.

Frey and Tomczyk also made a joint appearance in Hamburg in early March. At the Axel-Springer-Passage they competed in the 2011 rallye racing Carrera Cup, a racing series for slot cars, with an Audi R8 LMS.

As many as four Audi DTM drivers were guests at an event in Monte Carlo where the Audi RS 3 was presented to the press: Rahel Frey, Edoardo Mortara, Miguel Molina and Filipe Albuquerque provided background information on the sportiest A3 and on Audi’s DTM commitment to the audience of invited journalists.

According to the current state, Audi customer teams will compete in a total of 17 different racing series with the Audi R8 LMS in the 2011 season.

A spectacular night race at Adelaide, in which Mark Eddy in his Audi R8 LMS as the runner-up barely missed victory on Friday night, opened the Australian GT Championship. In the second race on Sunday the Australian took third place.

From Sebring to Schleswig-Holstein, Germany: Next weekend Le Mans winner Timo Bernhard will compete in the opening round of the German Rally Championship, the ADAC-Wikinger-Rallye, in a Porsche. The Audi driver is planning to contest a total of six rallies in 2011, including the German WRC round.

A few questions for ... Mike Rockenfeller

Sebring was the last race for the Audi R15 TDI - the car in which you celebrated your first Le Mans victory. Was that a special race?
Absolutely. Naturally, we would have liked to achieve a successful conclusion of the R15’s career. The car really handled superbly at Sebring but, unfortunately, we missed victory. We need to get past this now and look ahead.

Looking ahead - besides the DTM, this particularly refers to the Audi R18 in your case. What is your first impression of the new Le Mans Audi?
A very good one. Obviously, it’s a huge step on account of the new regulations. But another major aspect is the fact that we’ll have a car with a roof above our heads at Le Mans. The car is really fun to drive. I’m already looking forward to the next tests and, in particular, to the first race at Spa.

Has your life changed in any way as a result of the Le Mans victory?
Not really. But it’s true that my visibility has increased as a result of this victory. People continue to approach and congratulate me - still being the current Le Mans winner. I won’t deny the fact that I enjoy this. More important, however, is the experience which Timo (Bernhard), Romain (Dumas) and I have had. We showed that we can win at Le Mans. The knowledge of being able to do it will strengthen us as a team because we want to be successful again this year."


Coming up next week

Info and Foto/Audi Motorsport/ For Autorized and Acreditated Media Press.
Posted by AmigosRacing/MRS GT. at 16:07