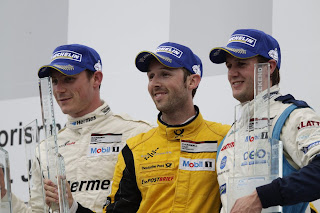 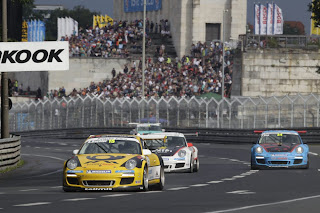 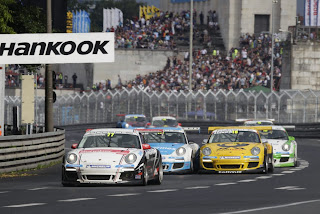 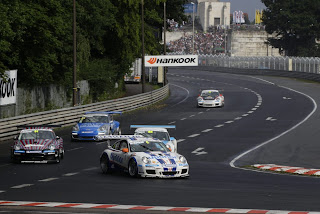 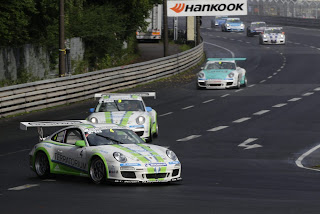 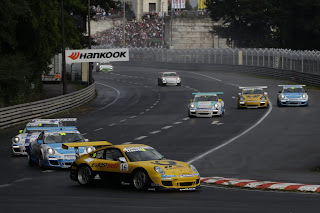 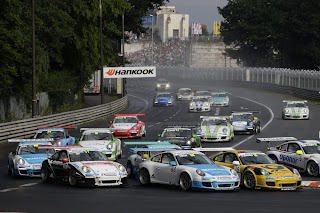 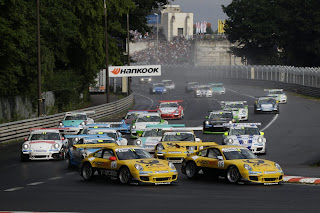 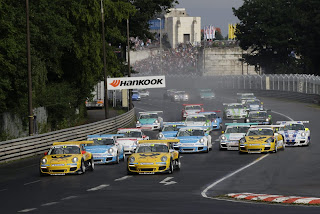 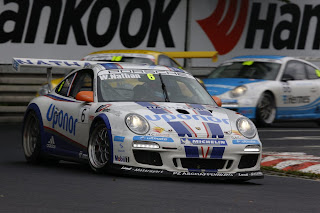 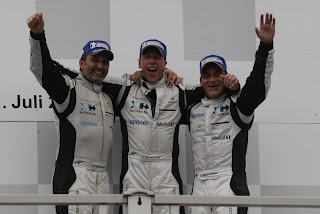 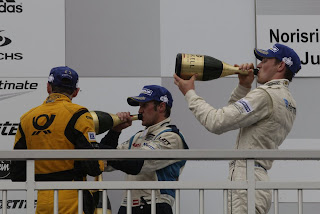 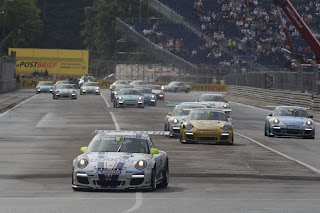 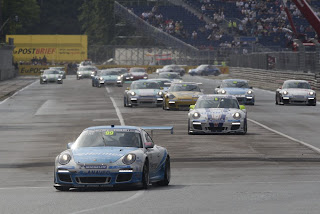 Stuttgart. René Rast remains in formidable form at the halfway mark of the Carrera Cup Deutschland. Driving for the Team Deutsche Post by tolimit squad the German won both the race on Saturday and Sunday’s 80 kilometre event on the Norisring in Nuremberg. Heading off on a wet and extremely slippery track after heavy rainfall with very little grip, Rast put in an inspired performance over the 34 race laps. At the flag of the ninth meeting this season, he held an impressive 17.8 second advantage over the second placed Frenchman Kévin Estre (Hermes Attempto Racing) – an incredible gap in Germany’s one-make series that is run with identical, 450 hp 911 GT3 Cup race cars.

Behind Rast, the race for the other podium spots was even more suspenseful. For a while it seemed that Jaap van Lagen had third place safely under his belt, until in the closing phase Norbert Siedler clocked much better lap times. In the last hairpin of the last lap, the Konrad Motorsport pilot from Austria pulled alongside the Dutchman from FE Racing by Land-Motorsport. The fight between the two was literally decided at the finish line: There, Norbert Siedler, who had finished second in Saturday’s race, saw the flag by a nose in front of Van Lagen’s 911 – and clinched third place by a mere 0.013 seconds.

The unlucky loser of the race is Sean Edwards. Taking up the sprint from second on the grid, last year’s vice-champion was able to move into the lead at the first corner ahead of Rast, his teammate from Team Deutsche Post by tolimit, but quickly lost it again. The Briton, who finished Saturday’s race in third place, fought valiantly but was hampered with engine problems. Sixth place in the race and second overall are really just damage control for the title favourite.

David Jahn (Attempto Racing), however, was pleased with his seventh placing after becoming the innocent victim of an accident in yesterday’s meeting. Trailing the German after an eventful race was Porsche Junior Klaus Bachler in eighth. Competing for the Team Deutsche Post by tolimit squad, the Austrian set a sensational fourth in qualifying as a Norisring newcomer. When the race took off on the slippery circuit, the 20-year-old, who had secured an excellent third from his home race in Spielberg recently, took things cautiously. Because of this he initially lost two positions, which he managed to recapture. But in the ninth lap a spin forced Bachler to let a rival past. Eighth at the flag gives the junior valuable points in his year of learning.

Ninth place went to Felipe Fernandez Laser. With this, the German handed his Franconia team, Farnbacher ESET Racing, a top ten placing at their home race. Porsche-Junior Michael Christensen scored the tenth spot. The Dane driving for Konrad Motorsport, who celebrated a podium result at the Lausitzring, took up the sprint from 13th. After a failed braking manoeuvre in yesterday’s race that resulted in a crash in the first corner, the stewards of the meeting relegated him down the starting grid by five positions.

René Rast (winner): “That was a perfect race and a perfect weekend. But the track conditions today were really tough. I spun during the formation lap and had a bad start. Now I’m very happy to travel to the Nürburgring as points’ leader.”

Kévin Estre (second): “The fight early on with René and Sean was great, afterwards René pulled away. I quickly realised that I couldn’t keep up so I focused on bringing second place home safely. We still have a lot of races left on the calendar and I’m positive that we can still be strong. It’s a great feeling to be part of the championship fight.”

Norbert Siedler (third): “I got away well, but afterwards it was quite a job to stay on the track. My car had been set-up to be faster towards the end of the race and I could catch Jaap. In the last lap he ran wide in the Dutzendteichkehre, I snuck through on the inside and that’s how we both headed for the finish line side by side. I managed to take the flag just before him and third place keeps me in the race for the title.”

Klaus Bachler (Porsche-Junior, eighth): “At the start I was perhaps a little too cautious, but it was my first time here and the track was wet. Then the situation improved and I thought I could catch Jaap. But I lost the rear when I braked for the Schöller-S, the rear wheel hit a damp patch and I spun. When you’re fourth in qualifying, you can’t really be satisfied with eighth in the race.”

Michael Christensen (Porsche-Junior, tenth): “I started the race with relatively low air pressure and didn’t get the tyres up to the optimal temperature. The track conditions today were very difficult. When the tyres then began to get better, things were basically already settled. So I didn’t really have a chance to get ahead.”

Preview for races 10 and 11 on the Nürburgring

With races 10 and 11 on the Nürburgring on 17 to 19 August after the summer break, the Carrera Cup Deutschland is almost on the season’s finish straight. Afterwards, only Zandvoort, Oschersleben and the final in Hockenheim are on the calendar. After three wins so far this season, René Rast holds a clear lead, with an eleven point advantage over Sean Edwards and twelve points ahead of Kévin Estre. The Briton has mixed feelings about the Eifel circuit: Last year Edwards was leading only to have tyre damage rob him of victory in the final lap. His adversary Nick Tandy profitted, inherited the points’ lead and ultimately won the prestigious title. At the event in August, competitors race on the so-called short version which is just 3.629 kilometres long.