GT Masters: Asch/Götz secure pole in both races at Nürburgring in Mercedes-Benz 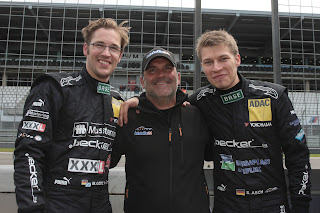 
Strong showing by "Men in Black" Sebastian Asch (26, Ammerbuch) and Maximilian Götz (26, Uffenheim) in the ADAC GT Masters during the ADAC Truck Grand Prix race weekend at the Nürburgring. Asch, who has racing in his blood, and Götz in the jet-black Mercedes-Benz SLS AMG secured the top positions on the grid for the ADAC GT Masters' races on Saturday and Sunday at the Nürburgring's sprint circuit. "The two pole positions are a good start to the weekend, now we'll have to see what we can do in the races," said Asch after qualifying.


Asch wins through against Rast in first qualifying session

Asch scrapped with the Audi R8 of René Rast (25, Frankfurt /Mamerow Racing) for pole position in the first qualifying session for Saturday's race. The son of touring car legend Roland Asch posted the first proper best time in the Mercedes-Benz, which Rast then beat. Asch quickly countered. The Mercedes driver overtook Rast, improving his fastest time just one lap later. So Asch is on the front row for the third time in his League of Super Sports Cars career in Saturday's race. However, qualifying was not without its problems for the guy from the small town of Ammerbuch in Germany: "The spring on the accelerator pedal parted company at the beginning of the session and I had to pit. The team was a bit worried; however, our mechanics fixed the fault in a trice, but dark clouds gathered soon after the enforced break and it started to drizzle with rain. So I got down to business straightaway and came home on pole."

Porsche driver Martin Ragginger (24, A/FACH AUTO TECH) dominated the first half of the second qualifying session for Sunday's race. The Austrian driver secured fastest time right at the beginning of the session, while most competitors were still waiting in the pits. Ragginger's time held good for most of the session and the Porsche driver even improved his fastest lap time at his second attempt. But then, Maximilian Götz intervened. The Mercedes driver moved up into second place behind Ragginger, achieving best time just one lap later. No one was able to dislodge the black Mercedes-Benz from the top spot by the end of qualifying. With his first pole position in the ADAC GT Masters, Götz made the day for kfzteile24 MS RACING, another pole at the Nürburgring. "I expected to be among the Top Five, but never thought I'd be on pole," said a happy Götz. "After a rain-affected practice session in the morning, there was no time left to set up the car for a dry track in qualifying and so we had to compromise, which worked perfectly. The two poles represent a high spot for us in our ever-improving form this year."

Götz and Ragginger head up the front row on Sunday, followed by Maxime Martin (26, B/ALPINA) in the BMW ALPINA B6 and Jan Seyffarth (26, Querfurt/SMS Seyffarth Motorsport).


You can obtain high-resolution photos for use in your publication(s) by visiting our media website .
Simply click on the picture of your choice to download it:


ADAC GT Masters on TV: All 16 races of the ADAC GT Masters are broadcast live at 12.15pm on Saturdays and Sundays in Germany, Austria and Switzerland on free to air TV channel kabel eins. Sports channel SPORT1 will feature highlights of the ADAC GT Masters from the Nürburgring in the ADAC Masters Weekend Magazine on 21st July at 12.15pm. In addition, live timing from all practice sessions and races to supplement live TV broadcasts can be found at www.adac-gt-masters.de