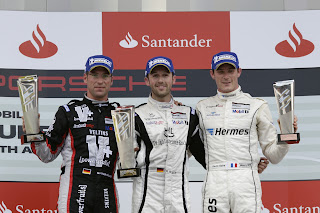 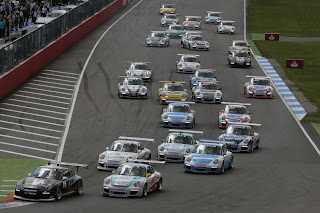 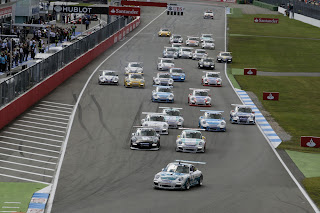 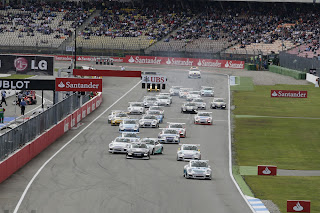 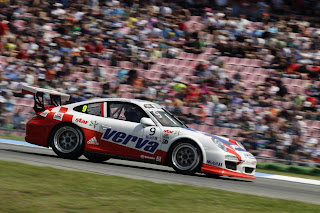 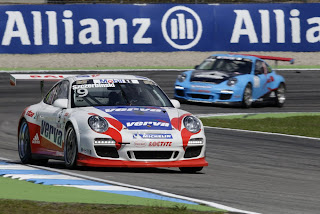 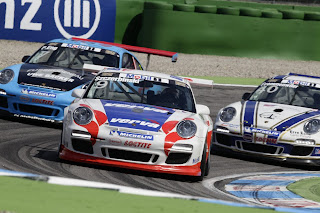 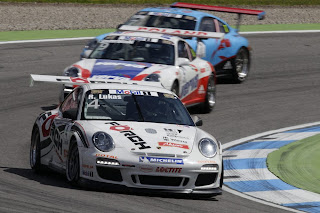 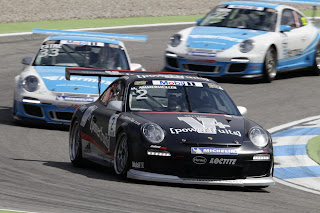 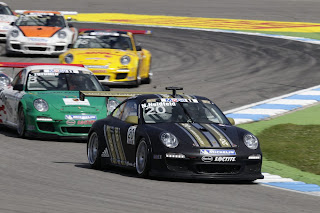 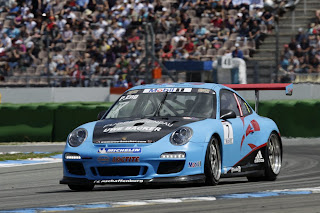 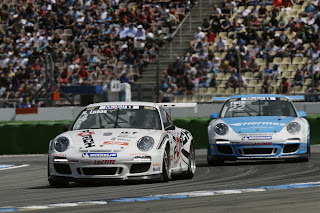 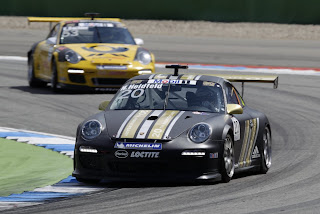 Porsche Mobil 1 Supercup, round 7 at the Formula 1 race in Hockenheim

Stuttgart. The star of the day in the Porsche Mobil 1 Supercup is René Rast. At the wheel of Lechner Racing’s 450 hp Porsche 911 GT3 Cup, which is based on the road-legal lightweight 911 GT3 RS sports car, the title defender from Germany won the tumultuous anniversary race of the world’s fastest international one-make series on Sunday in Hockenheim. This marks the fourth win so far for the double Supercup champion and enabled him to further extend his points’ lead. Second position went to the ex-Formula 1 test driver and Supercup newcomer, Michael Ammermüller (Germany) competing for VELTINS Lechner Racing. Ex-Formula 1 driver Nick Heidfeld, who gave his debut in the Porsche Mobil 1 Supercup, went head-to-head with the Supercup specialists and yielded an impressive top ten placing.

In Hockenheim, the Porsche Mobil 1 Supercup celebrated its 20th anniversary, and the 212th race in its history showcased clearly why the top series of the Porsche’s 19 one-brand series is popular with fans around the globe. A well-supported grid line-up, action-packed racing with fierce fights for positions and gripping overtaking manoeuvres and then Nick Heidfeld with an inspired performance in the VIP-911 fielded by Porsche AG – the spectators in Hockenheim were treated to a display of fascinating racing at its best.

Drama and incident already marked the start of the race. While pole-sitter René Rast was able to immediately pull clear of the field, behind him there were several collisions which also entangled the reigning champions toughest rivals for the title, Sean Edwards and Norbert Siedler. For the Konrad Motorsport driver from Great Britain, and the VELTINS Lechner Racing contender from Austria, who are just one point shy of the leading Rast, the race was over in the first lap. Germany’s Christian Engelhart (Konrad Motorsport) and Poland’s Kuba Giermaziak (VERVA Racing Team) also went home empty-handed and with their hopes for the title dashed.

Several other pilots moved into the limelight to replace the unlucky favourites in Hockenheim. Michael Ammermüller, for instance, the Supercup rookie from Germany. The VELTINS Lechner Racing pilot retained his scorching form after his impressive performance in qualifying where he snatched the second grid position on the first row alongside René Rast. Ammermüller was at no time a serious threat to Rast, but he made sure he defended his second position to the flag and achieved his best result in the series so far. With his result, Ammermüller moved into lead of the rookie classification replacing Nicki Thiim (Denmark), who finished fifth in his Hermes Attempto Porsche.

Another big winner of the anniversary race was Robert Lukas. Driving for FÖRCH Racing, the Pole took up the sprint from 16th on the grid to see the flag in fourth. Kévin Estre also made good use of his tenth grid spot. The Hermes Attempto Racing pilot from France, winner of the rookie classification last year, climbed the podium in third place. While René Rast brought home a safe victory, behind him every metre was fought tooth and nail. Michael Christensen put in a particularly impressive drive. The Porsche Junior from Denmark, who normally contests the Porsche Carrera Cup Deutschland, was obviously frustrated with his 25th qualifying result after making a wrong tyre choice for the drying track – but he used his second Supercup race to show what he is capable of. With the Porsche 911 GT3 Cup fielded by Konrad Motorsport, he worked his way up the field with a spirited and highly focussed effort, making up 17 places to see the flag in eighth. His Austrian Junior colleague Klaus Bachler (Team Deutsche Post by tolimit) concluded his premiere in the Porsche Mobil 1 Supercup as twelfth.

Nick Heidfeld also drove a strong race. The ex-Formula 1 pilot gave a stunning debut in the Porsche Mobil 1 Supercup in the cockpit of the VIP-911 run by Porsche AG. Up against specialists, he made up seven places in the race and with a top class effort finished in tenth.

René Rast (winner): “A perfect race and a perfect weekend. I made a clean start and managed to pull clear. When the safety car came out my gap was gone but I followed up with good restart and in the end phase I just had to concentrate on defending my lead. I’ve made a great leap forward in the championship with this win. At the moment everything is going fabulously.”

Michael Ammermüller (second): “My start was relatively unspectacular, but I can’t say the same for what was happening behind me. In the first lap my tyres didn’t reach the optimal temperature – and when they did the safety car came out. A big thank you to my team. That was a great weekend for us all.”

Kévin Estre (third): “This is a great result for us. I hadn’t expected it after the bad qualifying, so that makes this result that much sweeter. The most difficult thing today was surviving the start phase – it was really turbulent. Third place is fantastic.”

Michael Christensen (eighth): “My start was pathetic, but I managed to recover very well. A lot was happening in front of me, there were a couple of collisions, but luckily I kept out of it all and was able to plough my way through. The last five laps amongst the pack were really tough, but the fighting was great. I was determined to finish in eighth, but at the same time I didn’t want to risk making a mistake. Luckily in the last lap I passed the guy in front of me. I’m pleased that the race went much better for me than I had expected after the qualifying.”

Nick Heidfeld (tenth): “The whole weekend with the Supercup crew was huge fun. I had hoped for a top ten placing in my first Supercup race against all these specialists, but it was a hard piece of work. I think the fans really enjoyed seeing the fierce fights for positions and the many overtaking manoeuvres.”

Klaus Bachler (twelfth): “My start was good and I made up two places before the first corner. But then there was a crash in front of me, someone hit the rear of my 911 and I spun in the second corner. My car was bruised but luckily I could finish the race. It’s a shame because I’m sure I could have done better. Still, it was my first Supercup race and it was a great performance.”

* The race in Barcelona was cancelled. The replacement race is on 28 July in Budapest.

Budapest: Preview for the 8th round on 29 July
There is double the Porsche Mobil 1 Supercup action on the Hungaroring: On Saturday, the replacement race for the cancelled Barcelona round will be contested on the challenging circuit on the outskirts of Budapest. And on Sunday, the eighth race of the season takes off. Hence, there are double the points up for grabs for teams and drivers in Hungary. This is sure to add even more suspense in the title fight of the world's fastest international one-make race series. Sky broadcasts both races on the Hungaroring live. On Eurosport 2 the race on Sunday is televised live, with Saturday’s race going to air at a later time.