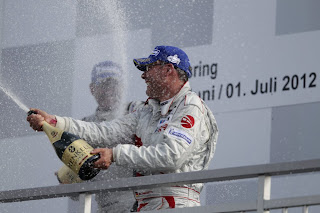 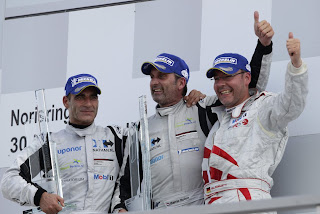 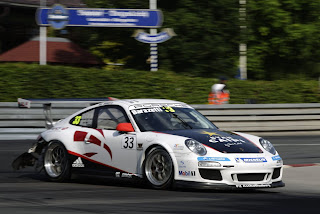 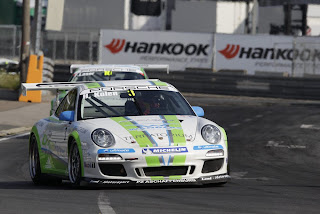 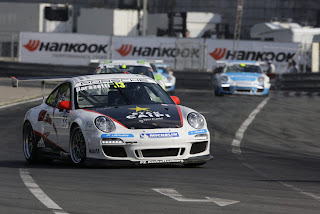 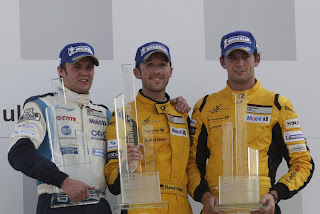 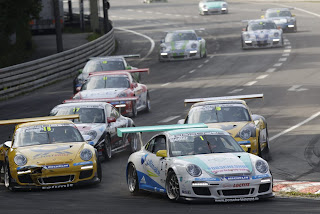 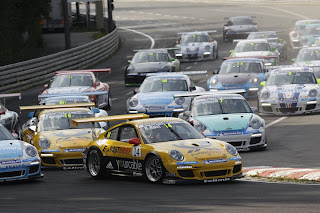 Stuttgart. Fortune favours the bold – and today that was René Rast. Taking off from pole position into the race on the Norisring in summer heat, the German made a catapult start to snatch the lead – while behind him a chaos in the first corner threw many prominent victims out of the race. With a lights-to-flag victory in 35 degree temperatures at the eighth race of the Porsche Carrera Cup Deutschland, Rast (Team Deutsche Post by tolimit) reclaimed the points’ lead in Germany’s fastest one-make race series. Second place on the 2.3 kilometre Nuremberg race track went to Norbert Siedler (Austria, Konrad Motorsport) ahead of Britain’s Sean Edwards (Team Deutsche Post by tolimit).

Right now in the Porsche makes cup series, everyone is chasing René Rast. In 2008, the 25-year-old celebrated his maiden championship title in the Carrera Cup. In the last two years he has secured championship honours in the international Porsche Mobil 1 Supercup – and now leads both the Carrera Cup and Supercup at halftime in the season. Already in qualifying, Rast set two untouchable top times on the short city course also putting him on pole for tomorrow’s ninth race.

Last year’s winner, Sean Edwards, also had Lady Luck on his side when he crashed in the first corner. His 911 was damaged, but he was able to finish the race. Heading towards the Grundig corner, Porsche Junior Michael Christensen (Denmark, Konrad Motorsport), attempted to outbrake Edwards. The manoeuvre failed. Christensen slid on the slippery kerbs and nudged the Briton’s 911. Edwards shunted the third qualifier and previous points’ leader Kévin Estre (France, Hermes Attempto Racing) into a spin. Almost simultaneously, Jaap van Lagen (Netherlands, FE Racing by Land-Motorsport) who had started from the 13th grid spot, also braked too late in the Grundig corner and made contact with the 911 GT3 Cup driven by Nicki Thiim (Denmark, Hermes Attempto Racing). These incidents blocked the corner – and signalled an early end for Estre, Thiim, van Lagen and Philipp Eng (Austria, MRS GT-Racing).

Swiss pilot Philipp Frommenwiler was delighted with fourth position after 27 laps in sweltering heat. Although the Attempto Racing driver has experienced some bad luck this season, this time he was one of the top contenders. Fourth is his third top ten placing this year and after claiming seventh recently in Spielberg, this marks his best result. Clemens Schmid (SWITCH IT Lechner Racing) also yielded his best result of the season with fifth. Behind the Austrian in sixth place came Porsche Junior Michael Christensen after being handed a drive through penalty due to the accident in the first corner. The second Porsche Junior, Klaus Bachler from Austria (Team Deutsche Post by tolimit), misjudged an overtaking manoeuver and retired in the second lap.

At his home race, Elia Erhart was ecstatic with his seventh ranking. For the local hero and his team, Marschall Goebel Racing, 2012 marks their first season in Germany’s fastest one-brand series, and seventh is the best result of their maiden year by now. Rounding off the top ten is Tomas Pivoda (Czech Republic, Konrad Motorsport) in eighth ahead of two Dutch drivers Harrie Kolen (Land-Motorsport) and Wolf Nathan (FE Racing by Land-Motorsport), who contest the amateur classification.

Race nine starts at 9.05 hours tomorrow and can be viewed live on the official Porsche website (www.porsche.com) in high quality – with editorial reports before the actually live-streaming, live-timing and commentaries in German and English. At 18.00 hours, TV station Sport1 broadcasts the entire 80 kilometre race on Sunday. On 2 July, the Monday after the Norisring race, news station N24 airs the 30-minute “Porsche Carrera Cup Magazin” from 18.30 hours. And on Sport1, Carrera Cup highlights are televised on Saturday, 7th July, from 16.30 to 17.00 hours.

René Rast (winner): “That was a relatively easy race for me today. I got away cleanly and I saw the mayhem behind me in the rear vision mirror. This gave me a major advantage and all I had to do was bring it home. The only problem was the heat.”

Norbert Siedler (second): “My start wasn’t that great. In the first corner I took the outside and luckily avoided the fray. This put me in third after the first lap. A couple of laps later I managed to overtake my teammate Michael and finished second. But I couldn’t catch René today.”

Sean Edwards (third): “What a crazy race. I was hit quite hard twice and both times I thought I was done for. But surprisingly my car just kept going like a dream. So I’m very pleased with third place and pocketing those points.”

Michael Christensen (Porsche-Junior, sixth): “I simply braked a little too late into the first corner and it seems I set off a chain reaction. That was a mistake. I am very sorry for the drivers who were affected by this and were unable to finish the race.”

Klaus Bachler (Porsche-Junior, retired): “I got away well at the start and then there was a jam in the first corner which I could luckily manoeuvre around. At that point I was running in sixth. At the start of the second lap I wanted to get past Frommenwiler in the first corner, but I lost the car and nudged the 911 of my teammate. Luckily nothing happened to him, but my radiator was damaged. I’m disappointed of course, but tomorrow is another day.”