Formula ADAC: Kremer on pole twice in front of home crowd at Nürburgring 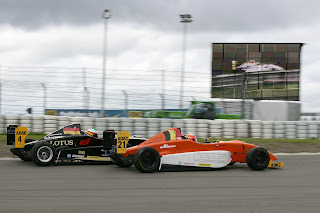 Kremer on pole twice in front of home crowd at Nürburgring


Nürburgring - Jason Kremer (17, Bonn, Mücke Motorsport) has claimed pole position for Races 10 and 11 of the 2012 series on the fourth Formel ADAC weekend of the season. It is the first time this year that the Bonn-based driver will be starting from the front of the grid but also the third pole of 2012 for Mücke Motorsport.

Kremer's lap time of 1:28.910 minutes was the fastest posted during the qualifying on Friday afternoon. The ADAC Sports Foundation protégé was a mere 0.016 seconds faster than Alessio Picariello (18, Belgium, G&J / Schiller-Motorsport) who now joins him on the front row.

Starting from P3 in the first race of the junior single-seater series, which is part of the support programme for the ADAC Truck-Grand-Prix this weekend, is Gustav Malja (16, Sweden, Neuhauser Racing) who has two race wins to his credit in 2012. Alongside him on Row 2 will be current championship leader Marvin Kirchhöfer (18, Leipzig, Lotus). Jeffrey Schmidt (18, Switzerland, Lotus) qualified fifth ahead of Roy Nissany (17, Israel, Mücke Motorsport).

The fourth row for Race 1 will be shared by Thomas Jäger (17, Austria, Neuhauser Racing) and Beitske Visser (17, Netherlands, Lotus). The only woman in this year's ADAC 'Open-Wheel Academy' was handed a five-place grid penalty for setting a personal best time in a sector that had been yellow-flagged.

The qualifying results also determine grid positions for Race 2. In this case, however, positions are allocated on the basis of second-fastest times set in qualifying. Once again, Kremer's time of 1:28.985 minutes was better than anyone else's. In the four timed practice sessions so far this season, three Formel ADAC drivers have succeeded in setting not only the fastest but also the second-fastest qualifying time. In Race 2 (Saturday, 14:50), Kremer will be joined on the front row by Beitske Visser.


Jason Kremer (17, Bonn, Mücke Motorsport), pole position in Races 1 and 2:
"My first two pole positions in Formel ADAC - simply great! I'm especially pleased to have done this in my home race at the Nürburgring. I had a good feeling all the way through qualifying, because I've prepared myself so thoroughly for the weekend. My big ambition is to win both races on Saturday. If I can do that in front of my home crowd, with my family and friends there to support me, that will be fabulous. I'm not worried about the weather; I'll be equally OK in wet conditions or in the dry."