Midway point in the ADAC GT Masters: Highlights of the first half of the season 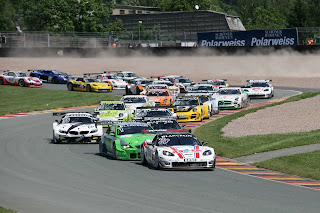 Midway point in the ADAC GT Masters:
Highlights of the first half of the season


The first half of the ADAC GT Masters season has left fans wanting more of the same. A record field of over 40 super sports cars with more different badges on their grilles than ever before has ensured scintillating action and entertainment in the eight races staged so far. It's time to take stock before the 'Super Sports Car League' gets back to business on the weekend of 10th - 12th August at the Red Bull Ring in Austria.

Half-time champions: Dino Lunardi (33, ALPINA) must now have a realistic chance of becoming the first ADAC GT Masters champion to successfully defend his title. The Franco-Belgian duo of Lunardi and Maxime Martin (26) have so far notched up two victories in their BMW ALPINA B6 and currently top the table. 'Half-time champions' may not have any official status, but it is nonetheless a good indicator - in four out of the last five seasons, the drivers leading the standings at the midway point went on to win the title. Porsche driver Swen Dolenc (44, Maulbronn / FACH AUTO TECH) goes into the second half of the season leading the amateur rankings, while the best-placed team is ALPINA.

Variety: We have seen no fewer than six different driver partnerships on the top podium spot in the eight races so far. Only Dino Lunardi and Maxime Martin in their BMW ALPINA B6 and Diego Alessi (40, Italy) and Daniel Keilwitz (22, Villingen / Callaway Competition) in their Callaway Corvette have so far registered two wins.

Even more variety: On the track, no driver has succeeded in qualifying for pole position more than once. Although Corvette driver Diego Alessi has started two races from P1, the Sachsenring pole was effectively gifted to him when the qualifying session was abandoned and grid positions for the first race were allocated on the basis of the standings. Corvette and Mercedes-Benz are the only constructors to have claimed two pole positions. Audi, BMW ALPINA, BMW have each had a single P1 start.

Competitiveness: Never before has the ADAC GT Masters been so closely contested - in qualifying for the second race at the Sachsenring, the 23 fastest supercars were within one second of each other.

Thrills: In the eight races so far, there have been 23 changes at the front involving 14 different driver pairings. Current championship table toppers Dino Lunardi and Maxime Martin have accumulated the most laps (and kilometres) in the lead: their green BMW ALPINA B6 has led the field for 92 laps (equivalent to 353 kilometres).

Silverware: Picking up the greatest number of trophies so far are the Mercedes-Benz SLS AMG duo of Sebastian Asch (26, Ammerbuch) and Maximilian Götz (26 Uffenheim / MS kfzteile24 RACING team). Currently third in the championship, they have ascended the podium four times in eight races.

Tension: The closest finish of 2012 was seen in Race 2 of the season opener at the Motorsport Arena Oschersleben. The Porsche 911 of Christian Engelhart (25, Kösching) and Nick Tandy (27, GB / Team Geyer & Weinig - Schütz Motorsport) crossed the line a mere 0.392 seconds ahead of the Mercedes-Benz SLS AMG driven by Sebastian Asch and Maximilian Götz.

How are the champions doing? For defending champion Dino Lunardi, everything is going according to plan. With perfect timing, the Frenchman now heads the standings as the season reaches its midway point. And after a bumpy start to the year, his co-champion of last season, Alexandros Margaritis (27, Cologne / SCHÖNER WOHNEN Polarweiss Team HEICO) also has cause for satisfaction at last. The former DTM driver, born to Greek parents in Germany, switched to a Mercedes-Benz SLS AMG for the new season and paired up with Lance David Arnold (26, Duisburg). Fifth place at the Nürburgring is their best result of 2012. Not having such a good time, however, is reigning amateur champion Marc A. Hayek (41, CH / InterNetX - Reiter Engineering). The Lamborghini driver has already had to miss two race weekends due to illness and is languishing in ninth place in the amateur standings.

Fast amateurs: The amateur classification has so far seen three drivers sharing the plaudits. After four wins this season, Swen Dolenc in his Porsche 911 currently leads the way, closely followed by Kristian Poulsen (36, Denmark / Young Driver AMR) in the Aston Martin V12 Vantage on three wins. The only other winner in the amateur stakes so far is Audi 8 driver Carsten Tilke (28, Munich / uhc Prosperia speed), the son of racetrack architect Hermann Tilke.

How are the newcomers doing? The ADAC GT Masters 2012 is fielding no fewer than four new super sports cars. Aston Martin V12 Vantage, McLaren MP4-12C, Nissan GT-R and Chevrolet Camaro all made their debut in the first race of the season. The most successful of the newcomers has been the new Aston Martin in which Kristian Poulsen and Christoffer Nygaard (26, DK) won at the Sachsenring. The two McLaren teams, Gemballa Racing and GT Racing MRS, have both scored championship points during the first half of the season.

Successful 'rookie': The most promising ADAC GT Masters entrant of the 2012 season has been Danish driver Kristian Poulsen, followed by the Ford GT duo of Jesse Krohn (21, Finland) and Nico Verdonck (26, Belgium / Lambda Performance). After a win and four other Top Ten placings, Poulsen is currently sixth.

What's in store for the second half of the season? After a mid-season break, the Super Sports Car League is back on the weekend of 10th - 12th August with its guest appearance in Austria, at the Red Bull Ring which also happens to be the fastest circuit on the ADAC GT Masters calendar. The timetable for the rest of 2012 then takes in the Lausitzring (24th - 26th August), a second visit to the Nürburgring (14th to 16th September) and the grand finale at the Hockenheimring (28th - 30th September).


ADAC GT Masters on TV: All 16 races of the ADAC GT Masters are broadcast live at 12.15pm on Saturdays and Sundays in Germany, Austria and Switzerland on free to air TV channel kabel eins. Sports channel SPORT1 will feature highlights of the ADAC GT Masters from the Nürburgring in the ADAC Masters Weekend Magazine on 18th August at 12.15pm. In addition, live timing from all practice sessions and races to supplement live TV broadcasts can be found at www.adac-gt-masters.de.