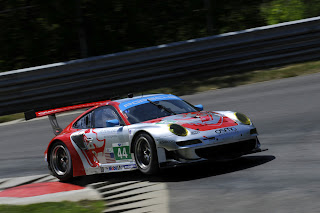 “Everything ran perfectly today. I managed to get in a really good lap and I’m absolutely thrilled about this great starting position. It doesn’t get much better than this,” said Marco Holzer. “On this narrow circuit with so many cars it’s really important to start as far up the grid as possible. I think we’ve found a good set-up for the race. This qualifying result is a boost for the entire team.”

With the second Flying Lizard 911, Porsche factory pilot Patrick Long secured the fifth grid spot on the short 2.478 kilometre track in the US state of Connecticut. He shares driving duties with his works driver colleague Joerg Bergmeister (Germany), who contests his 100th American Le Mans Series race tomorrow in Lime Rock and with five victories here is the most successful driver. In this series which features the world’s fastest sports cars he has so far clinched 34 class wins and five GT championship titles.

At the wheel of Falken Tire’s Porsche 911 GT3 RSR, Bryan Sellers (USA), the teammate of Porsche works pilot Wolf Henzler (Germany), set the eighth quickest time. Taking up the race from directly behind in ninth is Bryce Miller in the 911 fielded by Paul Miller Racing, which he shares with Sascha Maassen (Germany).

The race in Lime Rock starts on Saturday, 7 July, at 15.05 hours local time (21.05 hours CEST) and is broadcast live on www.americanlemans.com.