ADAC GT Masters to show off plenty of 'grunt' at Nürburgring 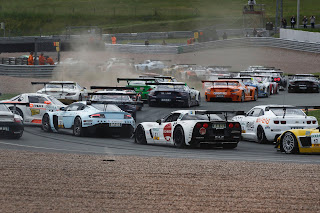 ADAC GT Masters to show off plenty of 'grunt' at Nürburgring


The upcoming ADAC Truck Grand Prix weekend will feature ADAC GT Masters super sports cars that can pump out as much as 650bhp at the fourth event of the 2012 season. The League of Super Sports Cars will be at the Nürburgring sprint track from the 13th to 15th July, along with 1,500bhp race trucks contesting the FIA European Truck Racing Championship, and will thrill the 200,000 fans plus expected there. With a line-up of 40 super sports cars, exciting scraps are in prospect as cars go head to head around the shortest circuit on the ADAC GT Masters calendar.

Two-time winners this season and current championship leaders Diego Alessi (40 / I) and Daniel Keilwitz (22, Villingen / Callaway Competition) can afford to be fairly relaxed as they travel to the Nürburgring. Keilwitz: "We've always done well at the Nürburgring but our main priority is to secure points in both races and to still lead the standings at the close of the weekend. As in all of our previous races, we will not take any unnecessary risks at the Nürburgring." If the Corvette pair can succeed in defending their championship lead in the Eifel, then Alessi/Keilwitz will become 'mid-point champions', and will have successfully negotiated one of the first hurdles on the way to securing the ADAC GT Masters championship.

Mercedes-Benz drivers in hunt for first victory of season

However, Sebastian Asch (26, Ammerbuch) and Maximilian Götz (26 Uffenheim, kfzteile24 MS RACING Team) are also keen to bag their first win this season in the Mercedes-Benz SLS AMG and take the lead in the championship standings. The duo in the black Gullwing made their mark at the start of the season as the fastest Mercedes pair, but the brand with the three-pointed star is still without a win this season in the ADAC GT Masters. The Nürburgring's sprint track would be absolutely the right place for a first win this season since it was here, exactly 12 months ago, that Mercedes-Benz succeeded in achieving their first ADAC GT Masters win for the SLS AMG GT3. Mercedes driver Maximilian Götz: "We are optimistic about our car's performance. However, qualifying will once again be crucial because grid position is extremely important in view of the tremendous power density in the ADAC GT Masters." That power density was clearly shown recently during qualifying at the Sachsenring when just one second covered the fastest twenty three super sports cars.

Drivers, though, will face another unusual challenge in the two ADAC GT Masters races during the ADAC Truck Grand Prix weekend. "The race trucks take a different line to us and throw up plenty of dirt onto the track," says Christoffer Nygaard (26, DK), who was victorious last time out at the Sachsenring in the Aston Martin V12 Vantage with co-driver Kristian Poulsen (36, DK / Young Driver AMR). "What's more, the trucks also deposit fluids on the track, and you must bear that in mind on the initial laps if you want to stay out of trouble."

The eight drivers of the four Mercedes-Benz SLS AMGs prepared by Team HEICO Motorsport are all hoping for their first podium of the 2012 season at their home race; the Mercedes team is based at the Nürburgring and secured the first win of the 2011 ADAC GT Masters season for a Gullwing at the track there. "After a poor start to the season, I hope that we can do better in the race at the Nürburgring," says local driver and defending champion Alexandros Margaritis (27, Cologne / SCHÖNER WOHNEN Polarweiss Team HEICO), who co-drives one of the Gullwings with Lance David Arnold (26, Duisburg). "We've used the period since the last race to test the car thoroughly and we hope that our season can now finally get underway properly at the Nürburgring."

Who can beat leader in the amateur championship stakes Kristian Poulsen?

Kristian Poulsen, who heads the standings in the amateur championship, will be all fired up and raring to go at the Nürburgring after securing his first win last time out at the Sachsenring. With two victories in the amateur rankings at the recent ADAC Masters Weekend in Saxony, the Aston Martin driver took top position in the amateur standings from Swen Dolenc (44, Maulbronn), who, supported by Porsche ace Martin Ragginger (24, A / FACH AUTO TECH), would dearly like to reclaim the number one slot in the Eifel at the wheel of his Porsche 911. Toni Seiler (54 CH), who has twice finished as amateur champion, is currently placed third in the standings and can't wait to pounce. He intends securing his first amateur stakes win of the season in the Eifel along with team-mate Frank Kechele (25, Ulm) for their yellow Corvette.

Fans at the Nürburgring can also look forward to entertainment off track at the ADAC Truck Grand Prix since the action will continue without a break from Friday through to Sunday. Friday evening will feature a terrific performance by pop star DJ Ötzi on the large open-air stage in the Müllenbachschleife. Cult band Truck Stop (Friday), German country and western music legend Tom Astor (Saturday) and good old boy from Hamburg Gunter Gabriel (Saturday) will also perform at the Nürburgring high octane event. Tickets for the Nürburgring ADAC Truck Grand Prix event are available from EUR30 upwards and can be purchased from a number of ADAC branches - Koblenz, Mainz, Trier, Bad Kreuznach, Idar-Oberstein - and at the Nürburgring's information centre and at the box office.


You can obtain high-resolution photos for use in your publication(s) by visiting our media website .
Simply click on the picture of your choice to download it:


ADAC GT Masters on TV: All 16 races of the ADAC GT Masters are broadcast live at 12.15pm on Saturdays and Sundays in Germany, Austria and Switzerland on free to air TV channel kabel eins. Sports channel SPORT1 will feature highlights of the ADAC GT Masters from the Nürburgring in the ADAC Masters Weekend Magazine on 21st July at 12.15pm. In addition, live timing from all practice sessions and races to supplement live TV broadcasts can be found at www.adac-gt-masters.de