SUCCESSFUL FINALE FOR THE MRS TEAM. 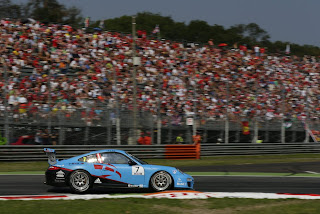 SUCCESSFUL FINALE FOR THE MRS TEAM.

Last weekend the tenth run of the Porsche MOBIL1 Supercup took place at the royal park of Monza on the same platform as the Formula 1 GP of Italy.

The final race of the 2012 season took place on the traditional circuit Autodromo Nazionale di Monza, where five drivers still had the chance to fight for the championship. MRS youngster Philipp Eng and the Norwegian Carrera Cup champion Roar Lindland started for the MRS team.

”The qualifying on Saturday already went good for the MRS team. Although both drivers have never before driven on the high-speed circuit in Monza on a Porsche, placement and gap looked excellent. With a time, only 6/10 seconds behind the pole setter, Philipp Eng reached P11; Roar Lindland qualified his 911 in the tenth starting grid. “The qualifying was not so bad. We were a little bit unlucky with the second tire set; we went out too late and then there was a yellow flag and I could not improve my time. The first two sectors in both laps were even better. That would have been enough for a better position. Therefore finally I reached P11”, said a satisfied Philipp Eng.
The race on Sunday took place on sunny and warm conditions. Not only the fight for the championship caused drama and suspense, also Philipp Eng could shine with a great performance. After a rather slow start Philipp Eng could gradually win positions and showed some very good overtaking. At the end Philipp Eng passed the finish line as good sixth. “Maybe I was too careful at the start and in turn one. But today I took care of my tires and arranged my material very good. Even at the end of the race I could drive very fast lap times, partly I was faster than the top. The car was fantastic, many thanks to the team, that was a really good job”, said Philipp Eng after the race. MRS newcomer Roar Lindland drove a clean race with lap times, which were absolutely good for top15 placements and after the race he was thrilled by the Porsche MOBIL1 Supercup.
Karsten Molitor: „A very reconciliatory ending, after a not so easy season for us at the Porsche MOBIL1 Supercup. Philipp did a great job. Slowly we reach our goal that Philipp can implement his potential during a race. He arranged his material and drove a very clever race. The lap times were unbelievable constant and very fast. Also our Norwegian guest, Roar Lindland, had a good weekend. Without even having driven in Monza, he improved in every single session. I think, we could get him into the Supercup and we really hope to see him back soon in the championship. At this place I want to thank the whole team for their highly motivated assignment and their very reliable work.”

Your MRS GT Racing team.
Posted by AmigosRacing/MRS GT. at 17:15