DTM: Audi with tailwind to the next race 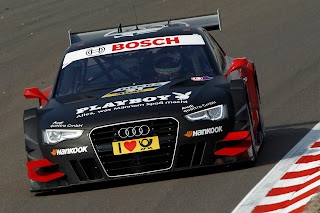 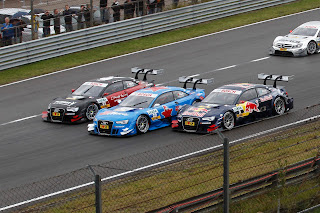 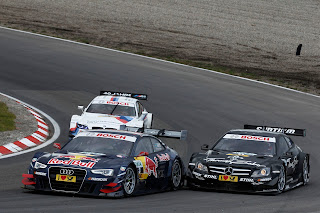 Audi with tailwind to the next race

·         DTM visits Motorsport Arena Oschersleben
·         Sights are set on first place in the manufacturers’ championship
·         Five Audi victories on this track in the past eight years
Ingolstadt/Oschersleben, September 7, 2012 - The DTM remains a thriller. By achieving the one-two-three triumph at Zandvoort at the end of August defending champion Audi has made up 49 points in a single race and is now just five points behind Mercedes-Benz in the manufacturers’ standings. In the drivers’ standings, as well, nothing is impossible. With a victory at at the Motorsport Arena Oschersleben (September 14 to 16), Audi racer Edoardo Mortara (Audi Sport Team Rosberg), in the best case, could narrow the gap to leader of the standings Gary Paffett (Mercedes-Benz) to nine points.

Since its return with a manufacturer’s commitment in the 2004 season Audi has won five of the eight DTM races at Oschersleben. Last year, the brand clinched a one-two-three result with a record advantage. Mattias Ekström put a proud distance of 42.167 seconds between himself and his immediate rivals - a result that had never before been seen in the DTM since its re-launch in 2000.

Most of the Audi drivers are looking forward to the East-German circuit with similarly eager anticipation as they most recently did to the dune circuit at Zandvoort, as every one of them associates a special highlight with Oschersleben. For Mattias Ekström, it was last year’s record victory; for Timo Scheider, his first victory at a DTM race; for Mike Rockenfeller, his first podium in the DTM; for Miguel Molina, his first pole position; for Rahel Frey, her best DTM result to date - and Edoardo Mortara (third last year), Filipe Albuquerque and Adrien Tambay like the track at Oschersleben as well.

Overtaking on the 3.969-kilometer track is deemed to be extremely difficult. That is why qualifying on Saturday (starting at 13:30 - local time - live on "Das Erste") may produce a preliminary decision. And particularly there Audi was extremely strong in the last two races. At the Nürburgring, three A5 DTM cars were on the two front rows and at Zandvoort, Audi even took the top five spots on the grid.

Advance ticket sales are promising a record turnout. Those not traveling to Oschersleben can watch the race live on "Das Erste" as usual. On race Sunday, ARD will be airing live coverage from Oschersleben starting at 13:45 (local time).

Dr. Wolfgang Ullrich (Head of Audi Motorsport): "With the one-two-three victory at Zandvoort we made a considerable leap forward in the standings and in the manufacturers’ classification we are now just five points behind Mercedes-Benz and clearly in front of BMW. If we manage a similarly strong team performance as we last did at the Nürburgring and at Zandvoort we might even become the front runner at Oschersleben."

Hans-Jürgen Abt (Team Director Audi Sport Team Abt Sportsline): "We’ve won Oschersleben as many as five times and will leave no stone unturned to clinch another victory there for Audi. We’re looking forward to the race in front of a fantastic crowd and many enthusiastic fans."

Ernst Moser (Team Director Audi Sport Team Phoenix): "The good results from the Nürburgring and Zandvoort are giving all of us tailwind. We can achieve a lot with that. Oschersleben has always suited us and Audi."

Arno Zensen (Team Director Audi Sport Team Rosberg): "We’re looking forward to Oschersleben. We’ve recently been scoring a lot of points while our competitors weren’t quite as successful. As a result, we’ve made up some ground in the championship. It would be fantastic if the whole Audi team could take this momentum along to Oschersleben."

Filipe Albuquerque (27/P), TV Movie Audi A5 DTM #22 (Audi Sport Team Rosberg)
- Most recently, managed the leap into Q4 two consecutive times
- Was pushed off the track at Oschersleben in 2011 by Ralf Schumacher
"Oschersleben is a track I really like. I’ve always felt at home there. The speed is right. Team Rosberg is doing a fantastic job. And I know by now how to make it into Q4. I’m convinced that it’s just a question of time until I’m on podium - so why not at Oschersleben?"

Mattias Ekström (34/S), Red Bull Audi A5 DTM #3 (Audi Sport Team Abt Sportsline)
- Won at Oschersleben in 2011 with a record advantage
- Triumphed this year at the DTM show event in Munich
"I like Oschersleben and have particularly fond memories of last year. My aim is for this weekend to go equally well. We’ve got to improve some more but I’m convinced that we’re heading in the right direction. I’m hoping for us to find an optimal set-up for Saturday and Sunday to put us in contention for victory."

Rahel Frey (26/CH), E-POSTBRIEF Audi A5 DTM #17 (Audi Sport Team Abt)
- In twelfth place, clinched her best DTM result to date at Oschersleben in 2011
- Set the second-fastest lap at the Nürburgring this year
"I’m looking forward to Oschersleben: a new race track, a new challenge, a new opportunity. At Zandvoort, things didn’t go so well for me, so there’s quite a bit for me to make up for."

Miguel Molina (23/E), Red Bull Audi A5 DTM #10 (Audi Sport Team Phoenix)
- In 2011, started from the pole position at Oschersleben
- Was on the podium at the 2011 Hockenheim finale
"Oschersleben is a special place for me. Last year, I managed to clinch my first pole position there in the DTM. This gives me a confident feeling. Also, it’s time to finally show something again. I believe that we can have a good weekend at Oschersleben."

Edoardo Mortara (25/I/F), Playboy Audi A5 DTM #21 (Audi Sport Team Rosberg)
- Completed the Audi one-two-three result at Oschersleben in 2011
- Won as many as two DTM races this year
"Oschersleben has been a good track for me so far. In 2010, I won the Formula 3 title and in 2011 took my second DTM podium there. So I’ve got fond memories. After the Nürburgring and Zandvoort, we’re optimistic and hoping to be able to achieve another top result."

Mike Rockenfeller (28/D), Schaeffler Audi A5 DTM #9 (Audi Sport Team Phoenix)
- In 2007, in just his second DTM race, took third place at Oschersleben
- In 2012, has started from the three front rows of the grid as many as five times
"Oschersleben is a track I really like. In my first DTM year, I immediately had a solid success with my first podium and a great race. As a matter of fact, I’ve always enjoyed driving there. I’m hoping that our A5 DTM will be quick, that we’ll have a good set-up - and if I could win the race in the end that would be ideal."

Timo Scheider (33/D), AUTO TEST Audi A5 DTM #4 (Audi Sport Team Abt Sportsline)
- In 2008, celebrated his first victory in a DTM race at Oschersleben
- Took his tenth DTM pole position in total at Zandvoort
"After the strong upward trend and the pole position at Zandvoort, I’m taking all my motivation and positive feelings with me to Oschersleben. I’ve still got fond memories of my first DTM victory. I’ve always felt comfortable there and found my rhythm right from the first lap on. I’m hoping that this will again be the case this year and that I’ll be able to show a similar performance as I did at Zandvoort - but this time with a good race result."

Adrien Tambay (F/21), Audi ultra A5 DTM #18 (Audi Sport Team Abt)
- In fifth place, scored his first DTM points at Zandvoort
- Made it all the way into Q3 at Zandvoort
"After scoring my first points at Zandvoort, a load has come off my chest. Now I may be able to tackle the race weekends in a slightly different way. I’m going to try and advance a bit further in qualifying in order to benefit from this in the race. I’m looking forward to the track because I’ve got fond memories of it."

All Oschersleben winners since 2000

In 2011, Mattias Ekström, Martin Tomczyk and rookie Edoardo Mortara delivered an Audi one-two-three result in a memorable wet race. Martin Tomczyk in a sensational recovery managed to advance from position 14 on the grid to second place and extended his lead in the standings. Mattias Ekström pushed forward from fourth to second place at the start and needed only eight laps to overtake Bruno Spengler in the Mercedes who had been leading the race until then. The two-time DTM Champion went on to set one fastest lap after the other and crossed the finish line with no less than a 42-second advantage.

Timo Scheider about Oschersleben: "Oschersleben is a very special track for me. It has fast and slow turns and is very selective. The track is not very wide. In addition, there are a few places where you’ve got to drive hard over the curbs. Overtaking is generally difficult; there’s an opportunity in turn 1 and in the last turn. Other than that, you’ve only got a chance if the driver in front of you makes a mistake. Obviously, that makes qualifying extremely important for us. The same goes for the pit stops as the pit lane is exceptionally long. I’ve got fond memories of Oschersleben because that’s where I celebrated my first DTM victory. The atmosphere is always fantastic. You can tell that there isn’t a lot of motorsport in the north of Germany - the fans are extremely interested and thankful too. That’s nice."