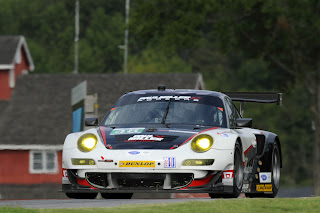 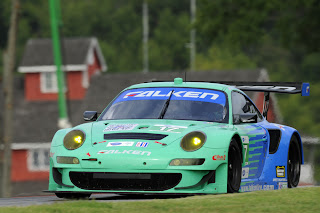 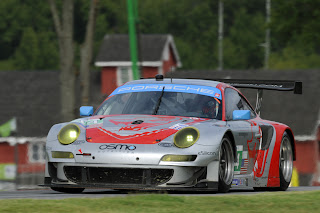 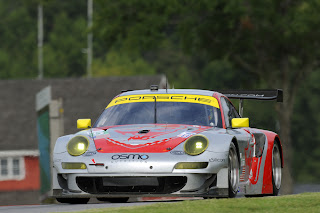 Stuttgart. On the Virginia International Raceway, Porsche factory pilot Joerg Bergmeister (Germany) clocked the fifth quickest time in the GT class qualifying. At the wheel of the Porsche 911 GT3 RSR fielded by Flying Lizard Motorsports, he was just one-hundredth of a second faster than his works driver colleague and compatriot Marco Holzer, who claimed the sixth grid spot for the successful customer team based in California. At the maiden race for the world’s fastest sports cars on the race track near Alton in the US State of Virginia, Joerg Bergmeister teams up with Porsche works driver Patrick Long (USA). Marco Holzer shares driving duties with team owner Seth Neiman (USA).

“On my fastest lap I made a mistake in Turn 16 which cost me not just that lap but the next one as well,” said Joerg Bergmeister. “Our car was running well today and I think second in qualifying would have been possible. Now we’ll concentrate totally on our race set-up. I’m hoping for a good race with perfect pit stops.” Marco Holzer said, “I found the qualifying difficult. I had problems with the brakes and the field was so tight that even the slightest error cost you positions. This is my first race on this track. I’m looking forward to it and I think we have a good car for the race.”

In the cockpit of Falken Tire’s Porsche 911 GT3 RSR, Porsche factory driver Wolf Henzler (Germany) and his American teammate Bryan Sellers, the winners of the last race in Baltimore, start from eighth place. American Bryce Miller, the teammate of Sascha Maassen (Germany), qualified the 911 of Paul Miller Racing on ninth.

The four hour race in Alton starts on Saturday, 15 September, at 14.30 hrs local time (20.30 hrs CEST) and is broadcast live on www.americanlemans.com/live on the internet.