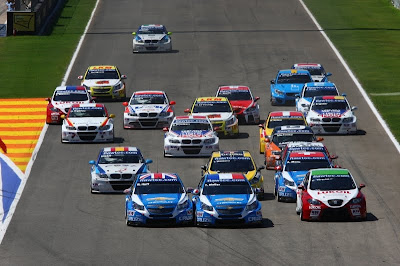 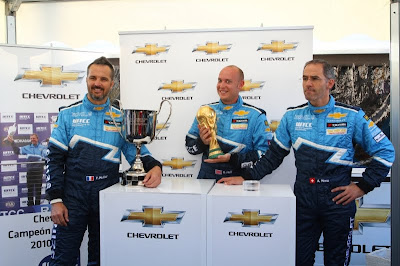 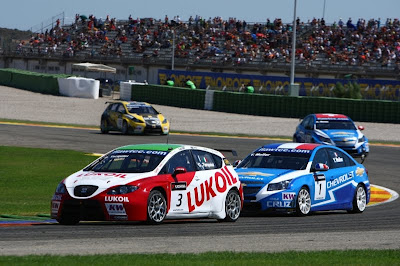 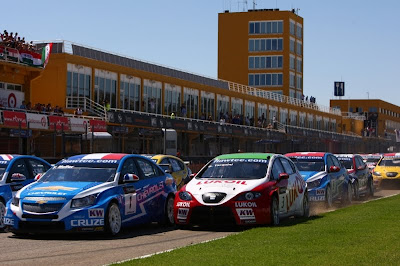 Weather: sunny, with a dry track

CHEVROLET CLINCHES BOTH WTCC TITLES AGAIN
For the second consecutive year Chevrolet made a clean sweep in the World
Touring Car Championship.
With three events still on the calendar the Cruze cars built and run by RML have
already secured both the Manufacturers’ and Drivers’ titles.
In what will be a record season for its domination, Chevrolet has built a gap of 304
points ahead of BMW with only 258 still at stake.
As for the drivers, Tom Coronel is currently fourth, but his gap of 175 points means
he is mathematically excluded from the fight that remains restricted to the Muller-
Huff-Menu trio.
Continuing on the impressive trend of the latest three events, in which he claimed
three pole positions and five race wins out of six, Yvan Muller has moved an almost
decisive step towards a third WTCC crown. The reigning world champion had
arrived in Valencia with six points to recover from Rob Huff and now leaves Spain
with a 16-point lead. There is still plenty of opportunities for Huff to reverse the
situation once again, however by ousting his young team-mate from the lead he had
taken since the first race in Brazil, Muller has delivered a clearly threatening
message.
Scoring a double victory today, Kristian Poulsen has jumped on top of the
Yokohama Trophy, only four points ahead of Norbert Michelisz.
The championship will resume in Suzuka, Japan, on October 23rd for rounds 19 and
20.
CORONEL DEMOTED AFTER RACE 2
Tom Coronel was given a 10-second time penalty by the Stewards of the Meeting,
for causing the incident with Javier Villa while they were fighting for the lead in the
second race.
This resulted in the Dutchman demoted from fourth to seventh.
The other two collisions investigated – Monteiro-Menu-Huff in Race 1 and Barth-
Bennani in Race 1 – were considered as normal race incidents by the Stewards.
RACE 1 – MULLER TAKES CHAMPIONSHIP LEAD
Yvan Muller claimed a crucial victory in Valencia’s first race, which enabled him to
oust his Chevrolet team-mate Rob Huff from the leadership in the Drivers’
Championship.
Huff was forced to recover after being involved in a collision with Monteiro and
Menu; the Briton managed to salvage a fifth place, however he now finds himself
nine points behind Muller.
Menu and Monteiro are currently under investigation for the incident with Huff.
Gabriele Tarquini risked to upset Chevrolet; the Italian took a great start to jump into
the lead at the first corner. However some misfiring problems forced him to slow
down and eventually to stop.
Tom Coronel inherited the last spot on the podium, narrowly beating Kristian
Poulsen who won the Yokohama Trophy.
The fight for fifth position was extremely exciting, with Huff emerging as the winner,
closely followed by Javier Villa, Norbert Michelisz, Tiago Monteiro, Robert Dahlgren
and Stefano D’Aste.
Key moments
Start – after one aborted attempt because of irregular line up, Tarquini takes the
inside line and overtakes the whole Muller/Huff front row
Lap 2 – Monteiro hits Menu who hits Huff, the latter spins and rejoins in 11th place
Lap 3 – Huff overtakes Engstler and Nykjær and moves up to ninth
Lap 4 – Muller steals the lead from Tarquini at Turn 2
Lap 5 – Sigacev pits for repairs after a collision with another car
Lap 5 – Barth and Bennani come together and retire
Lap 7 – Engstler retires due to a technical problem
Lap 8 – Menu overtakes Tarquini for second; Tarquini slows down with engine
problems
Lap 9 – Coronel overtakes Monteiro for third
Lap 10 – Poulsen and Huff overtake Monteiro for fourth and fifth
Lap 11 – Villa overtakes Monteiro for sixth
Lap 12 – Dahlgren overtakes Nykjær for ninth
Lap 13 – Michelisz overtakes Monteiro for seventh
Withdrawals
F. Barth: race incident; M. Bennani: race incident; F. Engstler: engine; G. Tarquini:
misfire
RACE 2 – MULLER BENEFITS FROM BMW HAVOC
Yvan Muller won again in Valencia, thanks to a series of mistakes made by the BMW
drivers.
With only four laps to go Tom Coronel, Javier Villa and Norbert Michelisz looked set
to score a BMW 1-2-3, leaving the Chevrolet men out of the podium for the first time
in the season.
And suddenly everything changed. Coronel and Villa clashed while fighting for the
lead, Michelisz spun at the last corner and this presented Chevrolet another 1-2-3
finish.
A crucial result, because it gave Chevrolet the mathematical certainty of both the
2011 Drivers’ and Manufacturers’ World titles.
Now it’s just a matter of knowing who among Muller, Rob Huff and Alain Menu will
be crowned champion. However, the Frenchman has moved an important step
forward taking the lead in the standings.
Just like in the first race Kristian Poulsen won the Yokohama Trophy, and he also
had to thank Michelisz for spinning out of the lead on the last lap.
Key moments
Start – polesitter Engstler stalls the engine, Coronel takes the lead from Villa and
Michelisz
Lap 1 – Muller overtakes Nykjær for fourth
Lap 4 – Huff overtakes Nykjær for fifth
Lap 5 – Nykjær is given a drive through for jump start; Dudukalo goes off into the
gravel trap
Lap 6 – D’Aste and Bennani swap positions fighting for 10th
Lap 7 – Villa is on the tail of Coronel’s car
Lap 8 – Dahlgren overtakes D’Aste for 10th
Lap 10 – Villa overtakes Coronel at Turn 2, but they come together at Turn 4; Villa
retires, Coronel drops to fifth; Muller takes advantage from the situation and jumps
into the lead ahead of Michelisz
Lap 11 – Engstler overtakes D’Aste for 10th
Lap 13 – Michelisz tries to steal the lead from Muller but spins at the last corner and
drops to seventh
Withdrawals
A. Dudukalo: race incident; T. Monteiro: race incident; J. Villa: race incident

THE WORD TO THE WINNER
Yvan MULLER – winner of Race 1 and Race 2
“It was a great weekend for me: pole position, two victories and the Manufacturers’
Championship for Chevrolet. I am very pleased.
Both races were very tough. In the first one I had to overtake Tarquini who had
taken a great start. And then I had to look after my tyres, because with this hot
temperature they were quickly going down. Especially my rear left tyre was nearly on
the thread.
In the second race I was happy to settle in fourth position because my rhythm was
not fast enough to catch the BMW cars. Then when I saw that Villa and Coronel
were in a close fight, I said myself: maybe something will happen. It actually did and
I used the opportunity! The final laps were difficult, because I had a lot of vibrations
on the rear axle and Michelisz was faster than me.
Now I’m leading the championship, but this will not change my approach. I will be
focusing on the next events like I have done so far trying to do my best.”