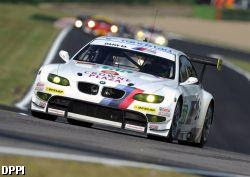 Ferrari did not have a great qualifying session as BMW was quickest in LM GTE Pro and Porsche in LM GTE Am thanks to Augusto Farfus and Nicolas Armindo respectively.

In LM GTE Am, only Patrick Long (Proton Competition Porsche 997) was able to match the pace of Nicolas Armindo (Imsa Performance Matmut Porsche 997) who took pole in 2m 04.028s.