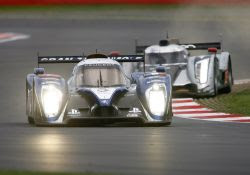 After winning the Spa-Francorchamps 1000 km and the Imola 6 Hours, Peugeot emerged victorious in front of 40 000 spectators in the Autosport 6 Hours of Silverstone, the fourth of the five rounds of the 2011 Le Mans Series. After a long duel with the no. 1 Audi R18 TDI, the no. 7 908 came first after a well-judged race showing its reliability and speed. Greaves Motorsport won in LM P2, Pegasus Racing in FLM, AF Corse in LM GTE Pro and IMSA Matmut Performance in LM GTE Am.

Audi and Peugeot went at it hammer and tongs right from the green light. In the first hour, Sébastien Bourdais who started from pole had to fend off Allan McNish's relentless attacks in the no. 2 R18 TDI. The Scot went to the fore and was then repassed by Bourdais, but he has to come in for a long pit stop after contact with another car. Franck Montagny in the no. 8 908 in third place lost 8 laps to the leaders after tagging an FLM and hitting the wall. With the no. 2 Audi and the no. 8 Peugot out of the running for victory, their sister cars took up the cudgels!

They went at it head to head and their duel lasted for most of the race. They passed and repassed each other. In the French camp Bourdais was at his brilliant best while Marcel Fässler was in flying form for Audi. After four hours' racing they were still running wheel to wheel. But after contact with another car the no. 1 Audi had an extended pit stop at the start of the fifth hour to have some bodywork replaced. Thus, the no. 7 908 was able to nurse its lead and score Peugeot's third win in the Le Mans Series this year.

The OAK Pescarolo-Judd, which had a reshuffled driver line-up (Olivier Pla joined Alexandre Premat) finished third in the category in front of the no. 13 Rebellion Racing Lola-Toyota, the first of the cars entered in the Le Mans Series Championship. The two cars fought to the bitter end for third place on the LM P1 podium. OAK Racing came out on top scoring a good result after a difficult season. Rebellion Racing's fourth place has put it in front of the Pescarolo squad, fifth with its Pescarolo-Judd, in the Le Mans Series title chase. The outcome will be decided between the two teams at Estoril at the end of the month.

The 2011 season is turning out to be an almost perfect one for Greaves Motorsport. After their victories at Le Castellet and Imola in addition to their success in the Le Mans 24 Hours, the British team won again on home soil. The Zytek Z11 SN led for the first half of the race until it was overtaken, by the Boutsen Energy Racing Oreca 03-Nissan. The latter hit trouble soon afterwards and had to stop for a battery change, and the Ojjeh-Lombard-Kimber-Smith went back in front. The Englishman brought the car home to the chequered flag. Greaves Motorsport's third victory means that the British team is very close to winning the LM P2 title in the Le Mans Series. It needs just a single point at Estoril in two weeks to be crowned.

After a cautious start Pegasus Racing kept up a hot pace throughout the race. It took the category lead during the second hour when the Schultis-Schell-Simon FLM 09 started to lap faster and opened up a gap. Genoa Racing hit back back towards the end of the event to take the fight for victory to its French rival, but Pegasus had enough in hand to score its third win in four races. While American team Genoa Racing kept the suspense alive with its second place, Pegasus Racing is closing in on the Le Mans Series title.

AF Corse drove a perfect race in what has been a great season for the Italian team scoring its third victory and winning the Le Mans Series title. After a second place at Le Castellet and its wins at Spa and Imola, Italian drivers Giancarlo Fisichella and Gianmaria Bruni fought off a tough challenge from their rivals. When the F458 Italia GTC took the lead it stayed there apart from a few brief moments, and ended the race having made one less pit stop than its most dangerous pursuers: the no. 59 Luxury Racing Ferrari F458 Italia GTC and the no. 77 Felbermayr-Proton Porsche 997.

The no. 67 Porsche 997 did not hit the front immediately. The car driven by Raymond Narac and Nicolas Armindo took the lead in the category in the second hour. The French duo had nothing to fear from their rivals thanks to a reliable and fast car and a consistent driver line-up led by a very quick Arlmindo who set the fastest lap. Ferrari scored a double in GTE Pro and Porsche in GTE Am as Proton Competition came home in second place. The no. 61 AF Corse Ferrari F430 GT, also a title contender, could do no better than fifth.

The no. 8 Peugeot driver line-up of Franck Montagny and Stéphane Sarrazin won the Michelin Green X Challenge awarded to the car having the best energy performance ratio.

Olivier Quesnel, (Peugeot Sport Team Principal): ”We arrived at Silverstone with the aim of finishing, and if possible fighting for victory. We did the opposite, in fact. We had a battle on our hands at the start of the race and towards the end we just kept it together and brought it home to the flag. It's a great team victory.”

Sébastien Bourdais (winner, no. 7 Peugeot): “At the start I found myself in a position I don't like: namely, being first on the road. Allan (McNish) was very aggressive and it wasn't easy to defend my position in the traffic. First of all, I just wanted to stay in contact. But I managed to retake the lead with a good passing manoeuvre. It's a great victory. The car was perfect and well balanced. I enjoyed the race.”

Timo Bernhard (no. 1 Audi, second LM P1 and overall): “We had only two small problems, I spun and Marcel Fässler tagged another car. When you lose time it's difficult to pull it back, especially when the others don't make any mistakes. It's top level motor racing. We fought for victory for a long time, though.”

Alexandre Premat (no. 24 OAK-Pescarolo, 3rd overall, 3rd LM P1): “Our aim was to triple stint and we did. Olivier (Pla) did really great stints. The team did a lot of work on the reliability. Honestly, in so far as I can compare it, the chassis is better than the R15 Audi. It was very pleasant racing in these conditions.”

Jean-Christophe Boullion (no. 13 Rebellion Racing Lola-Toyota, 4th overall and in LM P1, 1st Le Mans Series): “We're disappointed not to have been third. We fought hard. We finished in front of Pescarolo and that's important in view of the title. It's going to be very close at Estoril. It'll go down to the wire.”

Gianmaria Bruni (no. 51 Ferrari F458 Italia GTC, 1st LM GTE Pro): “We made a cautious start and then gained confidence as we racked up the laps. We knew we could finish with one pit stop less than our rivals. We played on this strategy and saved fuel. The result was victory and the title. It's been a great year with the whole team and Giancarlo (Fisichella). We've exchanged information all season. I'm really delighted.”

Nicolas Armindo (no. 67 Imsa Performance Matmut Porsche, 1st LM GTE Am): “We didn't make any mistakes and that's the essential thing. I pushed every lap. I really gave my very best. We were able to spare the car and it's a good result for the championship. But it won't be over till the flag falls in the last race!”

Find the results on www.lemans-series.com. The fifth and last round of the season will take place on the Estoril circuit in Portugal on 24-25 September 2011.