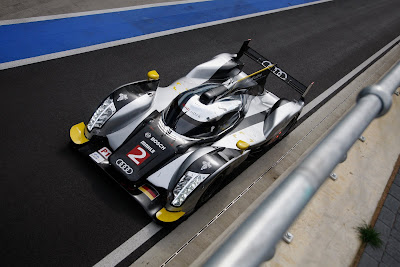 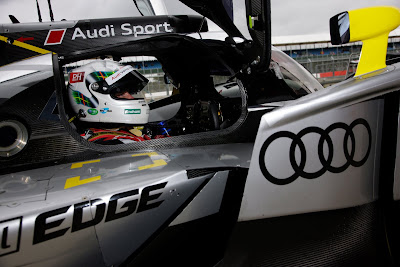 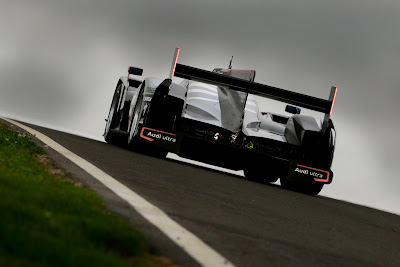 Audi on front row at Silverstone
􀀁 Allan McNish clinches P2 on the grid at his “home round”
􀀁 Rain shower prevents faster lap times
􀀁 Audi drivers optimistic for race on Sunday
Ingolstadt/Silverstone, September 10, 2011 – The two Audi R18 TDI cars from
Audi Sport Team Joest will start into the 6-hour race at Silverstone (Great Britain)
on Sunday at 11:35 a.m., local time ( 12:35 CEST) from the two front rows of the
grid.
Rain showers made conditions in qualifying on Saturday afternoon difficult.
Drizzling rain had already set in before the beginning of the 20-minute session. But
when the two Audi drivers, Allan McNish and Timo Bernhard, were on what were
their fastest laps up to that time, they encountered heavier rain in the last track
sector so that they were unable to improve their times any more.
Due to the location of the team at the beginning of the pit lane the two Audi R18
TDI cars were not able to start their chase for times right at the beginning of the
qualifying session. That proved to be crucial. After a strong first flying lap McNish
was on course for setting the best time on his second lap before encountering rain
in the last chicane before the start and finish. Consequently, neither the Scotsman
nor his team-mate Timo Bernhard, who had to overtake several slower cars on the
first two laps, was able to improve.
The squad around Head of Audi Motorsport Dr. Wolfgang Ullrich looks toward to
the fifth round of the Intercontinental Le Mans Cup (ILMC) with confidence
nonetheless as all four Audi drivers commented positively about the handling of
their Audi R18 TDI right from the beginning at Silverstone and are sure that the
true potential of the Le Mans winning car will be shown in the race.
Audi.tv will air full-length live coverage of the 6-hour race on Sunday on the internet
at http://microsites.audi.com/lemans/. Allan McNish is contesting the Silverstone
race together with Tom Kristensen, Timo Bernhard and Marcel Fässler.
Quotes after qualifying
Dr. Wolfgang Ullrich (Head of Audi Motorsport): “Today we didn’t have much time
in free practice because two red flag periods considerably shortened the practice
session. But we’d already done a good job on Friday and worked out a good set-up
for both cars. We were actually quite optimistic for qualifying. Due to the weather
and pit lane situation we weren’t able to be among the first to go out on the track
and that was crucial today. We waited until the first cars were gone. Unfortunately,
the rain was getting heavier on our fast laps. That didn’t allow us fully use the
potential.”
Tom Kristensen (Audi R18 TDI #2): “It’s great to be back in the UK, particularly at
Silverstone and its fantastic race track. Yesterday and today the weather has been
very changeable and that will continue to be the case tomorrow. We need to closely
watch the weather forecasts with respect to the set-up of our cars. We tried out
various options in the past two days. It looks like there may be more rain tomorrow
– and I’m hoping for us to be perfectly prepared for it. Allan (McNish) did a good job
in qualifying. Now we’re exactly between the two Peugeot on the grid. That could
mean that we’re in for a thrilling 6-hour race tomorrow.”
Allan McNish (Audi R18 TDI #2): “Qualifying went well with respect to the car’s
performance capability and the feeling for it. Naturally it was a bit frustrating that
the weather didn’t cooperate. But that was the same for everyone in the field. The
first fast lap was relatively free, on the second one there was heavy rain in Stowes
Corner and in the last turn. Without that, more would have been possible. I’m going
into the race tomorrow with a positive feeling.”
Marcel Fässler (Audi R18 TDI #1): “We’ve been able to reel off our program in the
practice sessions so far, tried out set-ups for the race and are basically very happy
with the car. I’m actually convinced that we’ll be running well in the race tomorrow.
I had a good feeling right from the start, the car has superb balance. That’s why I’m
looking forward to tomorrow even though we were a bit unfortunate with the
weather in qualifying today. But the grid positions aren’t so crucial at a 6-hour race.”
Timo Bernhard (Audi R18 TDI #1): “That was a difficult qualifying session. Just
before the start, rain set in. On both of the two timed laps when the track offered
the highest grip level I had to overtake two or three cars. At the end of my third
flying lap the rain was really pouring down. It wasn’t possible to improve any more.
So we were a bit unfortunate. But I think we can make up for that in the race –
because our performance is right.”
Ralf Jüttner (Technical Director Audi Sport Team Joest): “A lottery! The rain started
right in time for qualifying. We had the option to use several sets of tires but just
getting one set up to heat was difficult enough. Maybe we went out a tiny bit too
late so that the track was already too moist. We went out one minute after the
session had started – that was the minute that was lacking in the end. Allan McNish
caught a good lap while Timo Bernhard was a bit unfortunate with traffic. He didn’t
hit the narrow window in which fast laps were possible. But all in all we don’t have a
bad starting base on the two front rows, particularly as the drivers are very pleased
with the set-up of their cars.”
Qualifying results
1 Bourdais/Pagenaud (Peugeot) 1m 43.924s
2 Kristensen/McNish (Audi R18 TDI) 1m 44.856s
3 Montagny/Sarrazin (Peugeot) 1m 45.102s
4 Bernhard/Fässler (Audi R18 TDI) 1m 46.621s
5 Jani/Prost (Lola-Toyota) 1m 47.684s
6 Lahaye/Moreau/Ragues (Oak-Pescarolo-Judd) 1m 47.785s
7 Nicolet/Prémat/Pla (Oak-Pescarolo-Judd) 1m 47.890s
8 Belicchi/Boullion (Lola-Toyota) 1m 48.287s
9 Collard/Tinseau/Jousse (Pescarolo-Judd) 1m 48.624s
10 Laventis/Watts/Kane (HPD) 1m 49.619s
Audi Sport.
Posted by AmigosRacing/MRS GT. at 18:50