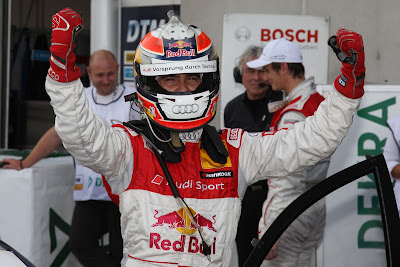 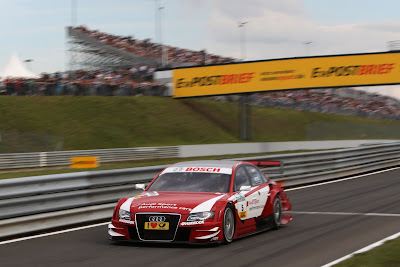 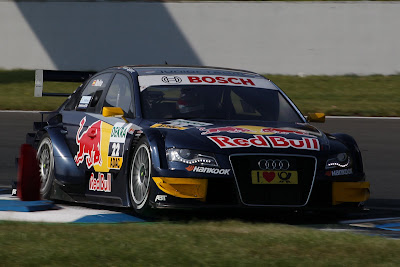 Olé, olé: Audi driver Molina clinches
first pole
􀀁 22-year-old Spaniard shines in DTM qualifying at Oschersleben
􀀁 Three Audi A4 DTM cars on the two front rows
􀀁 Leader of the standings Martin Tomczyk on grid position 14
Ingolstadt/Oschersleben, 17 September 2011 – Olé, olé: The Spaniard Miguel
Molina stole the show from the established stars in qualifying for the DTM race at
the Motorsport Arena Oschersleben by clinching his first pole position in the most
popular international touring car racing series. With three A4 DTM cars on the two
front rows of the grid Audi achieved an impressive qualifying result.
The youngster from Audi Sport Team Abt Junior, who has been suffering a string of
misfortune and unable to score points so far this year, managed to continually
improve on Saturday afternoon. After eleventh, fifth and second place in the first
three qualifying segments Molina, who at the age of 22 is the youngest Audi factory
driver, secured the top spot on the grid in Q4 with a lead of one thousandth of a
second over Bruno Spengler.
“Achieving a pole position in the DTM is simply fantastic,” jubilated the Spaniard.
“Particularly after a season that has been so unfortunate for me up to now. I want to
thank Audi and my team for the fantastic car but also my family who is supporting
me.”
Two of his team-mates, Oliver Jarvis and Mattias Ekström (both from Audi Sport
Team Abt Sportsline), are starting from the second row on Sunday. Directly behind
them Timo Scheider is following as another driver from Audi Sport Team Abt
Sportsline, who missed Q4 only by 67 thousandths of a second.
Edoardo Mortara (Audi Sport Team Rosberg) managed the leap into Q3 as well.
However, the best rookie in the 2011 DTM did not manage a perfect lap in the third
segment. The Italian will start into the race from position eight, Mike Rockenfeller
and Filipe Albuquerque, who achieved the fastest time in both free practice
sessions, will start from positions ten and eleven.
For Martin Tomczyk qualifying turned out to be a disappointment. For the first time
this year the leader of the standings from Audi Sport Team Phoenix was eliminated
in the first qualifying section and will only be starting from position 14. “My car was
slipping way too much,” said the driver from Rosenheim, Bavaria, who is living in
Switzerland. “We need to analyze the reason for this because this has never
happened before this year. I have my work cut out for me tomorrow. But in the DTM
anything is possible.”
Tomczyk’s team-mate Rahel Frey will tackle the race on Sunday starting at 2 p.m.
(from 1:45 p.m., local time, live on “Das Erste”) from grid position 16.
”It was an extremely thrilling qualifying,” commented Head of Audi Motorsport Dr.
Wolfgang Ullrich. “I’m very happy for Miguel (Molina) and Oliver (Jarvis), who have
had a difficult season so far. Today both of them showed their true potential.
Naturally, it’s a shame that Martin (Tomczyk) is starting so far from the rear here of
all places. But it shows how incredibly close the competition is in the DTM this year.”
Audi Sport/ For Acreditated and Autorized Media Press.
Posted by AmigosRacing/MRS GT. at 17:31