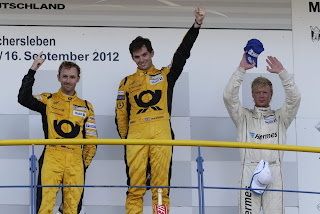 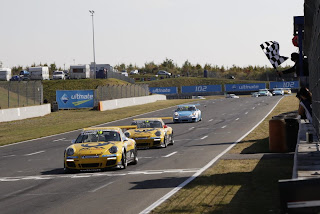 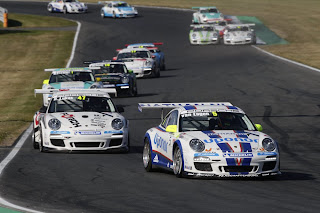 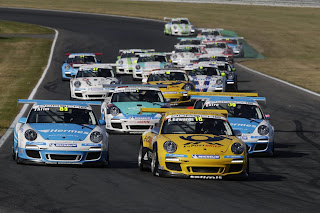 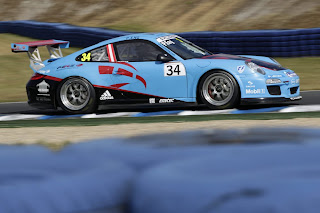 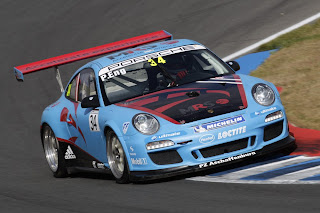 Stuttgart. Pole position, perfect start, victory: Race 15 of the Porsche Carrera Cup Deutschland in the Motorsport Arena Oschersleben couldn’t have gone better for Sean Edwards. Claiming his fifth win of the season, the Briton driving for the Deutsche Post by tolimit squad cut the gap to his teammate and points’ leader René Rast (Germany) to twelve points heading to the final weekend of the season. Second place at Sunday’s race went to René Rast ahead of Nicki Thiim (Denmark, Hermes Attempto Racing). This now makes the fight for the title of Germany’s fastest one-make race series on 19 to 21 October in Hockenheim between Rast and Edwards.

Initially it looked as though Edwards would earn more points towards catching his teammate. The two Hermes Attempto pilots Nicki Thiim and Kévin Estre forced their way past Rast at the start, which threw him back into fourth place. But the German who was crowned champion of the international Porsche Mobil 1 Supercup a week ago, kept his cool. He stuck tight to Estre and waited for his chance. And it came: At mid-race, when the Frenchman tried to overtake his Danish teammate he destroyed a tyre in the attempt and retired, Thiim lost not only his almost certain second place to Rast, but also his theoretical chance of clinching the title.

The two Porsche juniors experienced a fantastic race Sunday – but at the end of the day only one went home happy: Austria’s Klaus Bachler (Deutsche Post by tolimit) took the flag in fourth and celebrated his second best result of the season after his third place at his home race in Spielberg. With this, the 21-year-old consolidated his third rank in the rookie classification for newcomers. With a cracking start, Bachler catapulted his 911 from ninth on the grid to sixth where he slotted in just behind the Danish Porsche junior Michael Christensen. The Konrad Motorsport pilot had started into the race from a commendable fifth place, and even managed to see the flag ahead of Bachler, but was only classified as 15th. What happened? An accident involving Philipp Frommenwiler (Switzerland, Attempto Racing) brought out the safety car in lap 17, Christensen was running behind a vehicle that had already been lapped, which he overtook at a time when he was not allowed. For this he was handed a drive-through penalty that was then changed to a 30–second time penalty.

Because of this, Jaap van Lagen (Netherlands, FE Racing by Land-Motorsport) inherited fifth place. Behind him, a thrilled Philipp Eng (Austria, MRS GT-Racing) finished in sixth place – and the driver in seventh place rejoiced as if he had won the championship: Amateur Florian Scholze (Germany), who contested the Supercup this season, scored his best ever result in the German makes cup as a Carrera Cup guest driver for Förch Racing. Clinching eighth, youngster Tomas Pivoda (Konrad Motorsport) from the Czech Republic was also extremely pleased with his effort. Rounding off the top ten finishers were guest driver Robert Lukas (Poland, Förch Racing) and Norbert Siedler (Austria, Konrad Motorsport) in ninth and tenth respectively.

This afternoon, Sport1 shows a 30-minute highlight of the two races from 16.40 hrs. As always, on the Monday after the race weekend (17 September), news station N24 televises the 30-minute “Porsche Carrera Cup Magazin” at 18.30 hours. And on Sport1, Carrera Cup highlights will be aired on Saturday, 22 September, from 18.00 to 18.30 hours.

Sean Edwards (winner): “It’s fantastic to win the race. And it’s great that the Hermes boys fought amongst themselves instead of with me. I controlled the race today. For the final round in Hockenheim it now means full attack, we’ve already won the team championship and have nothing to lose.”

René Rast (second): “It was actually a quiet race for me. I didn’t get away well at the start and became sandwiched between Sean and Nicki and even had to let Kévin pass. Then I tried to force the two in front of me to make a mistake and that worked. Kévin got nervous and I moved into second place. The safety car phase was rather ill-timed because I had just caught up to Sean. Still, with a twelve point advantage it’s looking good for the final weekend.”

Nicki Thiim (third): “Two third placings this weekend – I’m happy with that. Although it’s a pity that the championship is now out of my reach. But we’ve improved bit by bit over the course of the season and that’s important to me. Now I’m looking forward to the final.”

Klaus Bachler (Porsche Junior, fourth): “Awesome race! I made a rocket start and shot from ninth to sixth place. Then I profited from two who were going at each other in front. But I’m mostly happy because I was able to keep up with the front-runners during the entire race.”

Michael Christensen (Porsche Junior, 15th): “I’m so annoyed with myself. It was my mistake that I lost fourth place. But the driver in front, a lapped vehicle, was really slow and had left a huge gap to the car ahead. I thought he had a problem. What should I do? I overtook him. But just then he accelerated again and that was that.”

The end of a varied and gripping Carrera Cup Deutschland season is highlighted by a classic duel for the title: At the final weekend of the brand trophy series on 19 to 21 October, René Rast and Sean Edwards will battle for title honours on the Hockenheimring Baden-Württemberg. Forty points are up for grabs at races 16 und 17. The two teammates at Deutsche Post by tolimit already shared race wins at the season-opener in Hockenheim. If Rast takes home the coveted title from Hockenheim, he will have succeeded in achieving something only one other driver has managed in two decades of Porsche one-make series racing – winning both titles of the international Porsche Mobil 1 Supercup and the Carrera Cup Deutschland in the same season. In 2003, Germany’s Frank Stippler managed this feat.