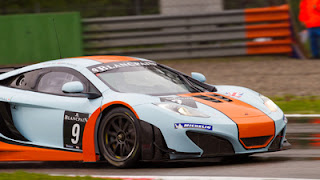 The Nürburgring has played host to many sports car races in the past and Gulf Racing UK’s Rob Bell and Stuart Hall have both enjoyed success at the ‘Ring. Their knowledge and experience will once again be hugely beneficial to both Mike Wainwright and Roald Goethe who will be making their debut at the track.
The Surrey, UK-based team, led by David Price, has fully re-built and prepared the two McLaren MP4-12Cs following the accidents that befell them at Spa.  The cars were both shaken down in the UK by Stuart Hall last week before heading to Germany.
Rob Bell, No.9 (GB):
“I'm very much looking forward to it - it seems like an eternity since Spa!  I really enjoy driving at the Nürburgring as the circuit has a great feel to it, with lots of sweeping corners and chicanes. Consistency and rhythm are the key to a good lap time, also using the kerbs in a few places can mean finding the last tenth or two which will be needed for pole position.
“The Nürburgring was where I had my first ever GT race and win, back in 2005 in a 1000 Km race. I've since had pole positions and further race wins so I have many fond memories of racing here.  We go there this time on the back of a promising year, but so far without a good result. We are looking to continue to improve and, with some luck, I'm positive we can challenge for a podium position.”
Mike Wainwright, No.9 (GB):
“I have never raced at the Nürburgring Grand Prix circuit but, as we all know, it’s an internationally recognised venue so I’m looking forward to learning a new track.  We are looking for a good strong finish; our record has not been entirely great so far this season and fewer mistakes and more consistency are required.”
Stuart Hall, No.69 (GB):
“I’ve got happy memories of the Nürburgring which is the scene of my last podium finish in an LMP1 car when Aston Martin Racing got a 1-2-3 result.  I’m looking forward to getting back in the McLaren again, and think the team has done a great job after Spa getting them prepared. The Grand Prix ‘Ring is a great track but, with the whole Blancpain grid there, it’s going to be a huge challenge.  We are going with our sleeves rolled up ready for a fight!!”
Roald Goethe, No.69 (D):
“Despite being German by birth, this is one of the tracks I haven’t raced at before so I’m quite excited about going.  I thought I might need a GPS installed on the race car to let me know which way the turns go but Stuart and Rob assure me they’ll point me in the right direction!  Stuart and I raced at Silverstone in August in the 6-hour FIA WEC race and it was good to get plenty of seat time in the gap between the Blancpain rounds.  I hope it will have stopped us from getting too rusty!”
Blancpain Endurance Press.
Posted by AmigosRacing/MRS GT. at 18:38