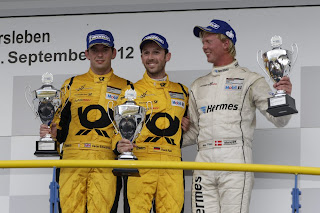 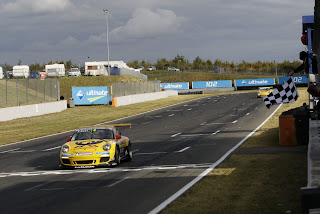 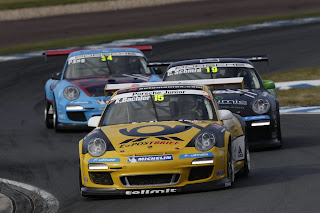 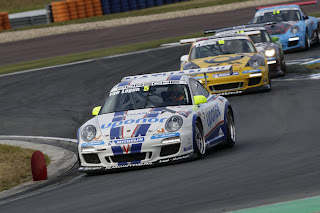 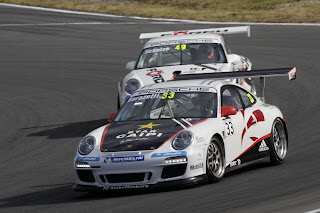 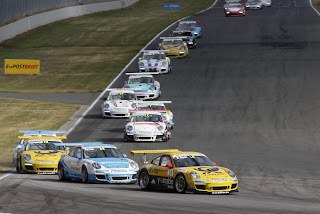 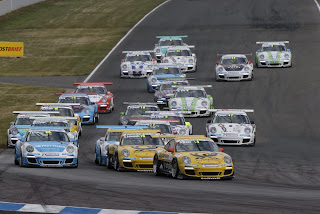 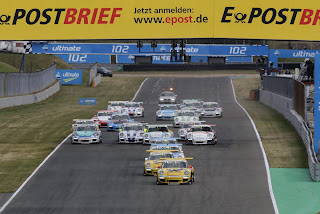 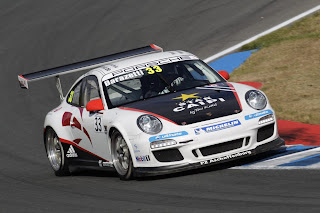 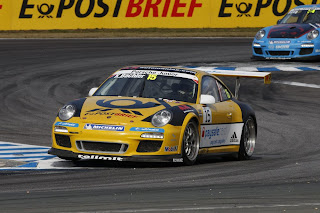 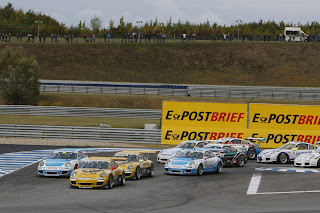 Stuttgart. Now with the championship in the decisive phase, the fight for the title turns into a classic duel. Clinching his sixth win of the season, René Rast (Germany, Team Deutsche Post by tolimit) further extended his points lead. Sean Edwards finished second at the 14th race of the Porsche Carrera Cup Deutschland. After Saturday’s race in the Motorsport Arena Oschersleben, Rast’s British teammate lies 14 points behind the German. Nicki Thiim (Denmark, Hermes Attempto Racing) was flagged off in third position. With their one-two result, Rast and Edwards handed the victory in the team classification to their Team Deutsche Post by tolimit squad with three races left on the calendar.

Starting from pole, René Rast immediately took the lead of Germany’s fastest one-make race series, to bring home an unthreatened sixth victory of the season after 17 laps – keeping out of the wheel-to-wheel racing behind him. Rast brims with confidence – just one week ago the 25-year-old celebrated his third overall win in the international Porsche Mobil 1 Supercup in Monza. Making a superb get-away, fourth qualifier Nicki Thiim immediately overtook Rast’s teammate Sean Edwards who fell back to third. In the sixth lap Edwards managed to snatch back the second spot. Finishing fourth at Saturday’s race, Kévin Estre (France, Hermes Attempto Racing) extended his points’ lead in the rookie classification.

Robert Lukas yielded fifth place. The Pole contested the Supercup in 2012, and after the season concluded in the international brand trophy series, he now makes a successful guest appearance in the German Carrera Cup for Förch Racing. Porsche Junior Michael Christensen found no way past the guest starter. Driving for Konrad Motorsport, the Dane came from seventh on the grid, lost a position to Lukas at the start but regained two positions through a collision in front of him. Finishing sixth, Christensen consolidated his second place in the rookie classification with three races to go to the end of the season. The second Porsche Junior, Klaus Bachler (Austria, Team Deutsche Post by tolimit), was content with his eighth place behind Jaap van Lagen (Netherlands, FE Racing by Land-Motorsport) who saw the flag in seventh. Bachler moved into ninth position in the overall classification.

Philipp Eng (Austria, MRS GT-Racing) and Philipp Frommenwiler (Switzerland, Attempto Racing) rounded out the top ten with ninth and tenth. Still, the Swiss driver was upset. He was running in fifth position when Norbert Siedler (Konrad Motresport) pushed him into the gravel. The ensuing drive-through penalty not only relegated the Austrian to 15th place, it also cost him his fourth position in the drivers’ classification.

In the amateur classification, “Bill Barazetti” (MRS GT-Racing) extended his lead with his first win of the season. The German took the lead of the B-classification at the fifth race of the season, and has not relinquished it since.

Race 15 will take off tomorrow at 11.20 hrs and can be viewed in high quality live on the official Porsche website (www.porsche.com) - with editorial clips prior to the actual live-streaming, live-timing and a commentary in German and English. And on Sunday afternoon, 16.40 hrs, Sport1 airs a 30-minute recap of both races. As always, on the Monday after the race weekend (17 September), news station N24 televises the 30-minute “Porsche Carrera Cup Magazin” at 18.30 hours. And on Sport1, Carrera Cup highlights will be aired on Saturday, 22 September, from 18.00 to 18.30 hours.

René Rast (winner): “That was a wonderful and perfect race for me and tolimit. It is just great to clinch the team championship three races before the end of the season. After a good start I was able to defend my position from Sean and Nicki for the first corner. Nicki kept the pressure on during the first laps, my impression was that he was racing with a qualifying set-up. But then my only concern was to keep my advantage and take it easy on the tyres.”

Sean Edwards (second): “My start was actually fine, but Nicki still managed to pass. I didn’t want to take any risks. When I overtook Nicki again, René had already pulled away. I pushed for a couple of laps but then the car felt nervous. Tomorrow I start from pole position, so of course I aim to win.”

Nicki Thiim (third): “I honestly have to admit that the tolimit guys are faster this weekend than us. After my good start I thought I’d try to get past Sean on the outside line and it worked. But in the end he was much quicker so I let him pass. It’s no use overworking the tyres early in the race, so I took it easy and brought home a safe third.”

Michael Christensen (Porsche Junior, sixth): “I’m happy with the result. It was really tight in the first corner. I managed to get through without problems but lost a position to Robert Lukas and it turned out to be impossible to get past him again. My car was very good in the first half of the race, but the rear tyres struggled over the later stages.”

Klaus Bachler (Porsche Junior, eighth): “My start was super. In the second lap Clemens Schmid nudged me slightly but luckily nothing happened. From eleventh on the grid to seventh at the finish – a great race for me.”