Audi R18 embarks on tour around the world 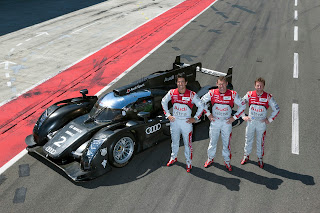 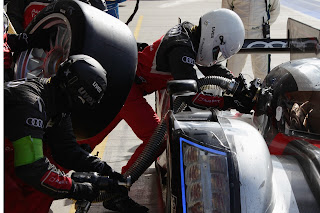 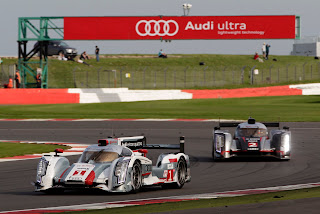 Audi R18 embarks on tour around the world

Ingolstadt, September 6, 2012 - High suspense in the second half of the season: After the early title win* in the manufacturers’ classification of the FIA World Endurance Championship (WEC), Audi is gearing up for four challenging overseas rounds. A thrilling race most recently at Silverstone provided a taste of a completely open second half of the season that will start at São Paulo in Brazil on September 15.

A dream has come true. The contest of the concepts in which the best technological solution wins was fully unleashed for the first time at the most recent fourth WEC round in Great Britain. The Audi R18 e-tron quattro hybrid sports car, the Audi R18 ultra featuring Audi’s ultra-lightweight technology plus a competing hybrid concept by Toyota kept 35,000 spectators at Silverstone on tenterhooks during the battle for the top.

Suspense can be expected to rise to an even higher level in Brazil as the Audi R18 ultra of Tom Kristensen/Allan McNish was unfortunate in Great Britain at the end of August. Car number "2" dropped to third place not just for one but two reasons as a puncture cost valuable time right in the starting phase. In addition, two safety car periods thwarted Audi’s originally planned refueling strategy. The effect of the ultra concept was obvious at Silverstone nonetheless. The R18 ultra won the Michelin Green X Challenge for drive efficiency.

In Brazil, the spectators in the grandstands will focus on the R18 ultra in particular since Audi is running 28-year-old Brazilian Lucas di Grassi as team-mate alongside Tom Kristensen and Allan McNish. In his "home" round, the racer from São Paulo can look forward to support from a large crowd of enthusiastic fans as he displays his skill in the LMP1 sports car.

For Audi’s factory team, the race on the challenging Interlagos track is not the first run in Brazil. Almost exactly 30 years ago, on August 14, 1982, Michèle Mouton/Fabrizia Pons won the "Rally do Brasil" featuring a start and finish in São Paulo. Audi Sport scored seven single wins in that season, a breakthrough technological innovation helping to capture its first FIA world championship title as well. Thanks to quattro drive Audi won the manufacturers’ classification in the World Rally Championship.

Two weeks ago, in the FIA World Endurance Championship (WEC), Audi celebrated the second consecutive victory with the forward-thinking hybrid drive, the fourth victory of the season to date, and the early title win in the manufacturers’ championship.* The battle in the drivers’ championship remains open. Marcel Fässler/André Lotterer/Benoît Tréluyer took the lead from Dindo Capello/Tom Kristensen/Allan McNish. The two Audi driver squads are separated by only 4.5 points.

Whereas McNish and di Grassi are familiar with the 4.309-kilometer track from Formula One days, it is new territory for the other Audi racers. And for Audi Sport Team Joest, Brazil marks the beginning of a major logistical challenge as the two Audi R18 cars will not be returning to Germany between the remaining four WEC rounds.

The spectators who will not be watching the race in the grandstands can look forward to extensive media coverage: www.audi-liveracing.com offers six hours of racing action, including cockpit camera perspectives and race summaries on the internet. The Audi Sport iPhone and Android apps provide WEC coverage on smartphones with live tickers, news, pictures and results. On Facebook and Twitter, racing fans are kept up to speed by Audi as well.

* Subject to the official publication of the results by the FIA

Topics of the weekend

-How narrow will the gaps be in the battle between Audi and Toyota?
-Which of the two vehicle concepts from Audi will be in front?
-Will the team in the Audi R18 ultra benefit from the track knowledge of two of its three drivers?
-How well will Lucas di Grassi fare on his sports car debut?
-Will there be another change in the lead of the drivers’ standings?


Quotes by the officials

Dr. Wolfgang Ullrich (Head of Audi Motorsport): "After having achieved two major aims by taking victory at Le Mans and winning the manufacturers’ classification in the FIA World Endurance Championship (WEC), we’re now tackling the second half of the season. We’re aiming for individual successes at each event. And we want to try and be in contention for victory every time. We’re not losing sight of the drivers’ world championship by any means. Our two driver squads are very close together. We won’t intervene in this contest but will give all drivers the same chances of deciding the world championship in their favor."

Ralf Jüttner (Technical Director Audi Sport Team Joest): "We’re in for a new, interesting phase of the WEC with four overseas races. In Brazil, we’re including a local driver - Lucas (di Grassi) - in the team. Besides Allan (McNish), he’s the only one who’s familiar with the circuit. This track is very special. As it is run counter-clockwise, the drivers have to readjust. Plus, our mechanics have to refuel the cars from the other side. In addition, the garages in the pit lane are extremely narrow. In the race, like before at Silverstone, we’re expecting a lot of pressure from Toyota. It’ll be a thrilling second half of the season."

Marcel Fässler (36/CH), Audi R18 e-tron quattro #1
-Celebrated his second consecutive victory of the season with his team-mates
-Traveled to the International Motor Show in Moscow with his team-mates between the rounds at Silverstone and São Paulo
"It’s fantastic that Audi’s out of reach in the constructors’ championship. And for André (Lotterer), Ben (Tréluyer) and me, it’s great to be arriving there as the leaders of the drivers’ classification. But we’re only at the season’s midpoint and there are still four more races to go. The situation can quickly change again."

André Lotterer (30/D), Audi R18 e-tron quattro #1
-Is the new leader of the standings with his team-mates
-The number "1" Audi started from the top spot on the grid three times this year
"We start each race with guarded expectations as there’s always a possibility for something to happen. I’m very much looking forward to Brazil and think it’s great that we’re battling for the drivers’ world championship. I’ve even got a personal link to the continent as some relatives of mine live in Peru. The track is new to most of us. It’ll no doubt be interesting again and and I’m hoping for a good weekend."

Benoît Tréluyer (35/F), Audi R18 e-tron quattro #1
-Achieved the best time in qualifying at Silverstone
-Like his two team-mates, is driving in Brazil for the first time
"It’s nice to be traveling to Brazil as the leader of the standings. I think it’s an advantage to be in first place of the standings at the season’s midpoint. Our car is already very good and we continue to make further progress. Naturally, we want to be at the front again in Brazil but we also saw how fast Toyota has already become. It’ll no doubt be a thrilling battle through to the end of the season - also within the Audi squad. So, we can’t afford to make any mistakes."

Lucas di Grassi (28/BR), Audi R18 ultra #2
-The Brazilian is experiencing his sports car debut at his home round
-Has previously raced on the Interlagos track in Formula One
"Audi is giving me a nice opportunity that I’m really happy about. Running alongside Allan McNish and Tom Kristensen I can learn a lot because they’re the best team-mates I can imagine for my first endurance race. And the audience here in my home country has the opportunity to get to know a fascinating sport in the FIA World Endurance Championship (WEC). My fellow countrymen are absolutely crazy about motorsport. I’m hoping for all of them to give us as much support as possible and to be filling the grandstands."

Tom Kristensen (45/DK), Audi R18 ultra #2
-Had to relinquish the lead of the standings at the season’s midpoint
-Is running together with Allan McNish and for the first time with Lucas di Grassi
"I’m looking forward to my first trip to Brazil. A few Formula One drivers have clued me in on some details about the track that is driven counter-clockwise. There are bumps in the track which means you’ve got to very carefully modulate the brakes. Allan (McNish) already knows the track, as does Lucas (di Grassi), who we warmly welcome to the team. At Silverstone, we opted for a promising strategy with the R18 ultra that couldn’t be perfectly put into action only due to a few unforeseeable events."

Allan McNish (42/GB), Audi R18 ultra #2
-Knows São Paulo from Formula One
-At Silverstone, missed the pole position by merely one hundredth of a second
"I really enjoy driving at Interlagos. And in Lucas di Grassi we’ve now also got a Brazilian in our team. It’s great that he’s driving with us - we’ve known each other for quite a while. Now we’re eager to see what advantages the R18 e-tron quattro will have on the São Paulo track and what advantages the R18 ultra has to offer. We’re going to battle to recapture the lead in the standings. At the same time, we’ve got to watch out for Toyota because at Silverstone we saw how quick our opponent really is."

The Audi drivers at São Paulo

Allan McNish about São Paulo: "There are several crucial sections at Interlagos. The way to the start and finish is a long uphill stretch. While heading for the first turn you’ve got to stay on the right-hand side for a long time and then initially pull inward toward the apex. At the exit of the corner, we stay on the inside in order to optimally catch the next right-hand turn. This is also a good place for overtaking. Then, the long left-hand bend toward the back straight follows. One of the most difficult places is the double right-hander behind the pits. You enter at very high speed and in the second part a blind apex follows. This is followed by a sequence of three slow corners - right, left, right. At the end, there’s the third part of the track with the last corner. It’s deceivingly slow, slippery and leads uphill."