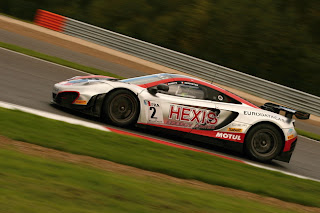 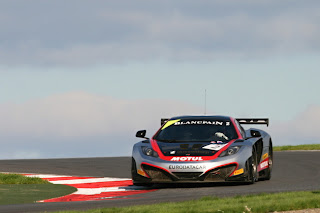 Hexis McLaren bounce back with one-two in Moscow Qualifying

The Hexis Racing pair of Alvaro Parente (PRT) and Gregoire Demoustier (FRA) secured pole position for tomorrow’s Qualifying Race in a stunning return to form for McLaren in the seventh round of the FIA GT1 World Championship.

Parente in the No.2 McLaren produced a quickest lap of 1:33.536 around the twists and turns of the Moscow Raceway.

In the previous round at Slovakia, the Hexis Racing team managed just two points after a spate of mechanical problems.

The No.1 McLaren of Fred Makowiecki (FRA) and Stef Dusseldorp (NLD) was second fastest (1:33.726) to round out a good day for the French outfit.

“After the hard weekend we had in Slovakia it was a great effort by the whole team to come here to Russia and finish P1 and P2 in Qualifying,” Parente said.

“We used the two Free Practice sessions well this morning to engineer the car and get the maximum performance which is what we showed this afternoon.”

Dusseldorp said he expected overtaking to be difficult on the 3.931 km circuit. “It is definitely going to be a challenge to overtake that’s for sure,” he said.

“But I like the circuit, it has a big long straight and the twisty part is challenging. We will do our best to keep the car up the front and score some good points this weekend.”

Conditions were cold and cloudy at Moscow Raceway with the air temperature reaching just 13C. The sun had broken through briefly by the end of the session and track conditions remained dry throughout.

Third was the No.3 AF Corse Ferrari of Toni Vilander (FIN) and Filip Salaquarda (CZE) with a best lap time of 1:34.188. The Ferrari duo had set the pace in Free Practice but Salaquarda says the change in weather conditions accounted for a slight drop-off in performance.

“In the Free Practice I were very fast and I was expecting a good Qualifying but I was struggling to heat the tyres and fighting the car this afternoon,” he said. “Maybe the weather changed a bit for us and that affected us.”

Buurman limped the ailing Z4 backed to the garage, leaving a trail of oil on the back straight and the pit lane and causing a delay of over 30 minutes while an absorbent powder was applied to the track surface. The engine also caught fire and damaged the car’s right-hand side tyres.

The pair will start tomorrow’s Qualifying Race from the back of the grid. The sister No.17 BMW of Mathias Lauda (DEU) and Nikolaus Mayr-Melnhof (AUT) will start just one place ahead after an indifferent session.

“The problem with no.18 car was the engine, it exploded and it causes us a lot of work to do now,” Vita4One Racing team manager Bartels said.

“We have to replace the engine and investigate and fix the damage caused by the fire. It will be a long night. We are trying our best to be in the fight for tomorrow.

“With our other car we are analysing what happened at the moment, it’s unclear why we lost so much performance. Hopefully we will find a solution so that we can put both our cars not at the back but in the front.

“The Russian track is very challenging, very technical with tight turns so we have to work hard to find the right set-up and get the balance right.”

Laurens Vanthoor (BEL) and Stephane Ortelli (MON) led the charge for the Belgian Audi Club Team WRT Audis with fourth place in the No.32 R8 just ahead of the No.33 car of Oliver Jarvis (GBR) and Frank Stippler (DEU).

“We’ve had a good day, I did Q2 today and managed P3, we ended up P5 which keeps us in a competitive position for the race,” Jarvis said. “Our team-mates are in P4, so not a perfect result but it could be worse.
“The Russian track is really cool I have to say, there’s lots of tight sections, left right left right, and a great straight which may not be too great for us but it’s a nice feature.”

All-Inkl.com Münnich Motorsport Mercedes, the teams’ championship leaders, were sixth and seventh – the No.37 of Nicky Pastorelli (NLD) and Thomas Jager (DEU) ahead of their German team-mates Marc Basseng and Markus Winkelhock in the No.38.

Francesco Castellacci (ITA) and Enzo Ide (BEL) in the second AF Corse Ferrari were eighth and the Sunred Ford GT No.10 of Armaam Ebrahim (IND) and Benjamin Lariche (FRA) ninth.

The Qualifying Race starts at 11:15 local time tomorrow followed by the Championship Race at 15:15.