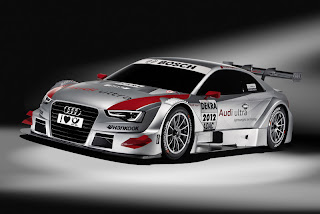 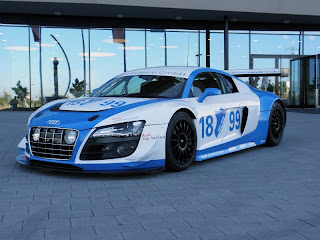 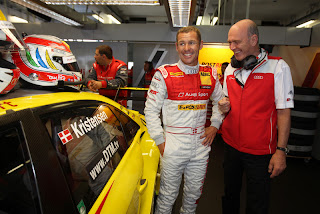 Tom Kristensen in the new Audi A5 DTM
􀀁 Show laps by the Le Mans record winner at the DTM finale
􀀁 Audi to host many prominent guests at Hockenheim
􀀁 New helmet and a glider plane flight for Rahel Frey
Ingolstadt, October 20, 2011 – The numerous attractions that will put the
spotlight on Audi at the DTM finale at Hockenheim this weekend will include the
brand new A5 DTM.
Premiere: A month after its unveiling at the Frankfurt International Motor Show the
Audi A5 DTM will make its first public appearance on a DTM weekend. Audi factory
driver Tom Kristensen will present the new 460-HP race car for the 2012 season to
the fans at Hockenheim. The eight-time Le Mans winner and former DTM racer will
be driving a show lap in the brand new coupe before and after the DTM race on
Sunday.
Meeting of the champions: Martin Tomczyk will be guest of honor at the big
championship party of Formula 1 World Champion Sebastian Vettel in his home
town of Heppenheim. Tomczyk and Vettel have a common sponsor, Red Bull, who is
planning to surprise the new DTM Champion by presenting him with a special gift on
winning the champion’s title.
Soccer meets racing: Motorsport and soccer will be featured in visual unity at the
DTM finale. An Audi R8 LMS sporting the colors of TSG 1899 Hoffenheim will be
used as a race taxi at Hockenheim. The club is sending Coach Holger Stanislawski,
national player Andreas Beck and goalkeeper Tom Starke to the race track. The
soccer players will have the opportunity to get to know the “Ring” from the cockpit
perspective as passengers in the Audi R8 LMS.
Prominent guests at the finale: Hip hopper and Fanta4 member Smudo together
with partner Nintendo will be watching the Hockenheim race as Audi’s guests.
Actors Manfred Krug and Till Demtrøder will be keeping their fingers crossed for
Audi on location as well. TV host Andrea Kaiser and her husband, Lars Ricken, a
former professional soccer player and Champions League winner, will be guests at
the Hockenheim circuit as well as the successful gymnast Magdalena Brzeska.
Warning: Lions on the loose: The Rhein-Neckar-Löwen (Lions) will visit Audi on the
weekend of the finale at Hockenheim. The handball team that includes 2007 World
Champion Oliver Roggisch and many other national players will be guests at the
garage of Audi factory driver Mike Rockenfeller on Sunday.
High up in the sky: Rahel Frey made one of her dreams come true on Thursday.
Before the DTM finale she experienced a flight in a glider plane in Bad Nauheim. Her
pilot was David Friedrich of the national glider aerobatics team. In return, last
year’s runner-up in the Advanced class of the championship will be treated to a ride
in Audi’s race taxi at Hockenheim on Saturday.
Appearance in Stuttgart: After an initial meeting with his engineers at Hockenheim
on Thursday Martin Tomczyk will be traveling to the next event. The DTM Champion,
who is in high demand, will appear on stage in front of 400 guests at the “Audi
Sport Night” and return to Hockenheim the same night.
Meeting of winners: Udo Weber will receive a personal guided tour by the new DTM
Champion, Martin Tomczyk, at Hockenheim on Sunday. In September, International
Motor Show visitor Weber as the best finalist in the Schaeffler DTM Experience had
competed against the Audi factory driver in the driving simulator. Weber won a VIP
package for the DTM finale at the event.
New design: Rahel Frey is contesting the DTM finale with a newly painted helmet.
Her sponsor Capri-Sonne had invited fans to participate in a competition. The best
design was implemented. On Friday, the Audi factory driver will receive her new
headgear from her advertising partner.
Audi Sport/Acreditated Media Press.
Posted by AmigosRacing/MRS GT. at 11:36