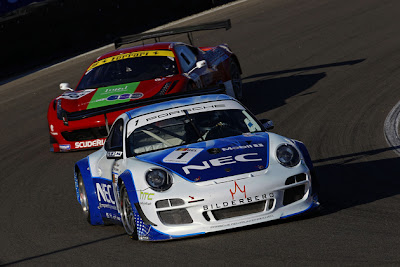 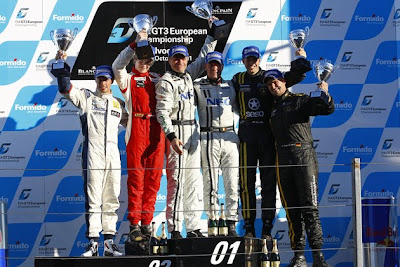 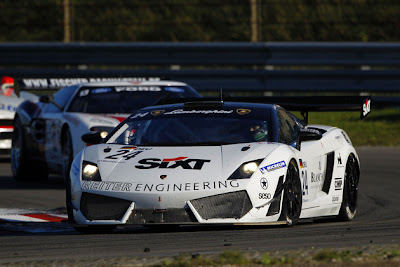 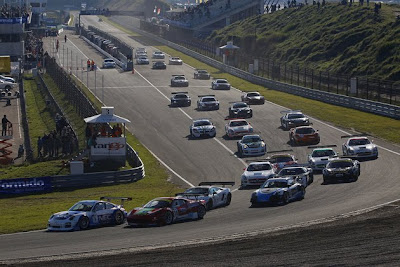 Paul van Splunteren and Maxime Soulet took their second victory of the 2011 season in the nr1 Prospeed Competition Porsche 911 GT3 R. Starting from pole position 2010 FIA GT3 Vice Champion van Splunteren took control of the race to lead until the pitstops and hand over to his Belgian co-driver, who completed the task to take the chequered flag 6.8 seconds ahead of their nearest rivals. The nr38 Scuderia Vittoria Ferrari 458 Italia of Michael Lyons and Filip Salaquarda pushed the Prospeed Porsche all the way to the flag but couldn't get on terms to challenge for the lead of the race. The nr24 Reiter Engineering Lamborghini Gallardo of Nikolaus Mayr-Melnhof and Albert von Thurn und Taxis finished in 3rd ahead of the two HEICO Motorsport Mercedes-Benz, giving them their third podium finish of the 2011 season and give them an outside chance of the driver's title in the final race tomorrow.

With the nr13 Fischer Racing Ford GT (accident) and the nr8 LMP Motorsport Aston Martin DBRS9 (technical) missing from the grid after being withdrawn from the event, 28 cars lined up for the start of the penultimate race of 2011. Starting from pole after the nr44 and nr45 HEICO Motorsport Mercedes were both given a 10 grid penalty for overtaking under a red flag during free practice, it was Paul van Splunteren who got the best start and the nr1 Prospeed Porsche led into the first corner ahead of the nr38 Scuderia Vittoria Ferrari of Michael Lyons, the nr24 Reiter Lamborghini of Nikolaus Mayr-Melnhof and the nr46 Aevitae Bleekemolen Racing Porsche of Ronald Van de Laar.

Van Splunteren opened up a 1.2 second gap to Lyons but the young British driver kept close tabs on the Dutch driver and kept the gap between one and two seconds for the next seven laps.

Further back the two HEICO Mercedes were making progress from the 11th and 12th places on the grid, with Christiaan Frankenhout making up three places on the opening lap. The nr24 Lamborghini was holding 3rd place when he suddenly lost power and fell back two places before the Lamborghini engine fired up again. After several laps of pressure from the nr13 Ford GT of Markus Palttala the Austrian driver was able to maintain his pace in 5th.

On lap 15 the pit window opened and the leaders came in over the next few laps. After all the pitstops Maxime Soulet was in the lead in the nr1 Prospeed Porsche, 5.7 seconds ahead of the nr38 Scuderia Vittoria Ferrari of Filip Salaquarda. The nr24 Lamborghini had managed to leap back into the final podium position, which now had Albert von Thurn und Taxis at the wheel, ahead of the two HEICO Mercedes led by the nr45 car of Patrick Hirsch. The nr46 Bleekemolen Porsche, now with Dennis Van de Laar at the wheel, was losing ground and by lap 29 had dropped out of the top 10 after he was tapped into a spin after a spirited battle with fellow Dutchman Jeroen den Boer in the Faster Racing BMW.

The nr50 AF Corse of Francesco Castellacci seemed to be struggling and was passed by several cars, including the nr3 Graff Racing Mercedes of championship rival Mike Parisy. The young Italian hung on to finish 9th, just one place behind Parisy at the chequered flag.

At the end of the race it was Maxime Soulet who crossed the line in the nr1 Prospeed Competition Porsche, 6.885s ahead of the nr38 Scuderia Vittoria Ferrari 458 of Filip Salaquarda and a further 2.224s ahead of the nr24 Reiter Engineering Lamborghini of Albert von Thurn und Taxis.

In the Driver's Championship Federico Leo and Francesco Castellacci's 9th place finish and with their nearest rival Mike Parisy managing to finish one place higher, means the Italian pairing hold a 12-point advantage in tomorrow's race.

In the Team Championship both of the Faster Racing by DB Motorsport BMW's finished in the points and this means Need for Speed Team Schubert's lead has been cut to just 11 points ahead of the final round of the season.

“Pole helps. The guys from Mercedes let us through by making a little mistake yesterday. Of course, if I had been third, I don’t know what would have happened. Today, here, the qualifying was great, I had a fantastic lap and I’ve never driven so fast here before. The start was relatively easy; I know the track, I know where to be on cold tyres as well, and I think that helped on the first lap. I had a decent first lap, and everything was a matter of trying to preserve the gap for my co-driver here. I managed it, and then it was just a matter of doing a clean in-lap, a good pit stop, and Max took over and we just managed to maintain what we did.

“It was a really fantastic feeling this morning, with qualifying going well, because I really had a lap that I was proud of, we had a fantastic car with the team, the Porsche likes the cold weather, and I could capitalize on that, and Chris Frankenhout came to tell me I was on pole, and that was a very good feeling. I also had the increased pressure of not screwing up in the first lap, because when you lead you‘re not allowed to screw up. For me it’s great because we have a lot of guests this weekend, so these are important sponsors or partners, and also to finish like this, for the team, after the hard first half of the year. This second win here means a hell of a lot to the team, to Rudi and his guys at Prospeed and our partners and to us.”

“To be honest, after my qualifying, I thought this was going to be very hard. But Paul brought the car in with a gap and I kept the gap. At the beginning I had to push really hard to make the gap a bit longer, and then it was really hard on the tyres as I pushed so hard at the beginning. I just had to keep the distance between us for it to be all right. The whole team is happy for this win.”

“In British GT we’ve enjoyed a bit of success and finished 3rd in the championship and it’s been a good year for the guys, this being Scuderia Vittoria’s first year it’s great to have so many wins and podiums. Last time in the Ferrari at Silverstone, we had a good pace in qualifying but some issues in the race. It’s great to have the opportunity to be so far up there at the start. I had a good pace, but it’s very difficult to overtake around here, so I was focused more on keeping good laps, watching the gap and looking after the tyres, so that Felipe had a good opportunity for the last half of the race. It worked out really well. We only knew we were coming here last Sunday, so it’s great to be able to pull it all together so well. I had a hard time here in free practice yesterday, it’s my first time here, I think we were about 20th. This is a great result for me to look to the championship next year.”

“After today’s qualifying which didn’t go very well and I was quite slow, stuck in traffic and I made some mistakes, I’m really happy to be here, in the top 3. I have to thank Michael for his good gap in the beginning. I had to push, but I was struggling with the front tyres. It was becoming better and better, I saw the Lambo behind me and tried to push a bit more, but I think I overheated the tyres and I was struggling again, so I’m really happy I kept the gap and finished 2nd.”

“The start was really good, we didn’t have any trouble, and the pace was really good and we could just go with the flow. I didn’t attack so that I could save the tyres for the end of the race, then all of a sudden, I was getting into the rhythm and out of this corner, uphill left-hand, there was just no engine; I couldn’t accelerate, shift up or down, nothing was happening for 4-5 seconds, standing uphill. Then all of a sudden it came back on for me. I tried to catch up, having lost 2 positions, and then could get back into the rhythm. Then we had another problem with the brakes. But I can’t complain, we’re in third place and Albert did an amazing performance at the end. I was just standing there for 20 minutes, dying on the pit wall until it was over, and I think he made an incredible effort with the lap times he pulled, so consistent and so fast.”

“It was a fun race; it was really good and exciting to see that the times were so close to each other. There was one pace, the whole pack was moving. I think that despite the bad luck with our electronics and our brake issues that we’ve carried over from qualifying, we really managed to get a good run. I tried to take the Ferrari, but I didn’t even make it close! I pushed a little bit in the beginning, but my rear tyres didn’t make it. It’s a great feeling to be back on the podium.”