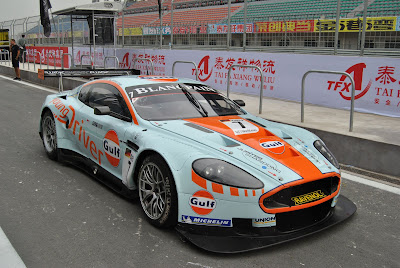 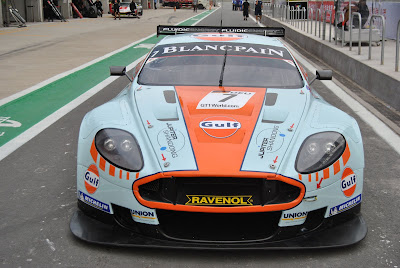 Paderborn, 01.09.2011 [GT1 World Championship]
Powder blue and orange, the colours of Gulf Oil, are among the most
legendary colours in motorsport history. Young Driver AMR is proud
to announce a partnership with Gulf Oil to sport these colours in the
GT1 World Championship. The No. 7 Young Driver AMR-Aston
Martin DBR9 of Alex Müller (GER) and Tomas Enge (CZE) will race
in a blue and orange Gulf livery in the three final rounds of the GT1
World Championship, in the two China races in Ordos and Beijing
and also in the final round in Argentina.

“I’m really happy about our partnership in the GT1 World
Championship with such an iconic brand as Gulf”, Young Driver AMR
team principal Hardy Fischer says ahead of the first race of the GT1
World Championship in China. “The Aston Martin DBR9 is one of the
most beautiful GT cars and the Gulf livery is a true legend, so this is a
natural fit. It´s the first time a Gulf livered car starts in the GT1 World
Championship and I hope that will bring us big success!”
Young Driver AMR travels to China with one of the best results in
team history under its belt. In the last round in France, Young Driver
AMR finished second and third, which brought Young Driver AMR up
to third place in the team championship, only 10 points behind the
leaders with still three race to go. Mücke/Turner are fourth in the
drivers championship, while Müller/Enge are fifth.