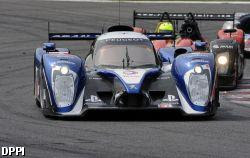 The no. 8 Peugeot set the quickest time in the first free session, and its sister car (no. 7) in the hands of Simon Pagenaud topped the time sheets in the second one. Even though the Peugeot drivers reckoned that the 908 was not the ideal car to tackle the quick Silverstone curves, the Frenchman put in a stunning lap in 1m 44.945s beating the quickest of the Audis no. 2 (1m 46.690s) by almost 2 seconds!

Steave Keeting was the fastest man on the track in Formula Le Mans for the Neil Garner Motorsport squad, which is racing on home soil with a trio of British drivers.

In LM GTE Pro JMW Motorsport laid down a marker in its Ferrari F458 Italia GTC in 2m 03.006s, and the Imsa Performance Matmut Porsche dominated the GTE Am category in 2m 05.852s.