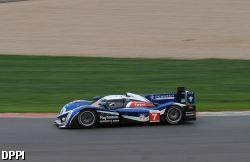 Simon Pagenaud set pole for the Autosport 6 Hours of Silverstone in 1m 43.924s. It was the Frenchman's first time out on the English circuit in the no.7 Peugeot 908 he shares with Sébastien Bourdais. In fact, he was called in at the last minute to replace the injured Anthony Davidson who was unable to drive in front of his home public.