Another one-two-three victory for Audi in the DTM 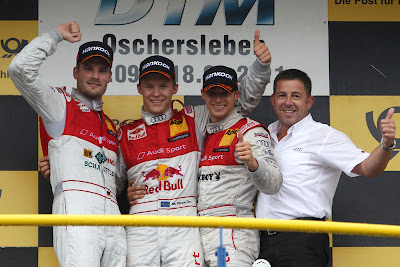 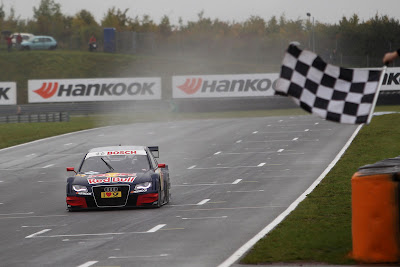 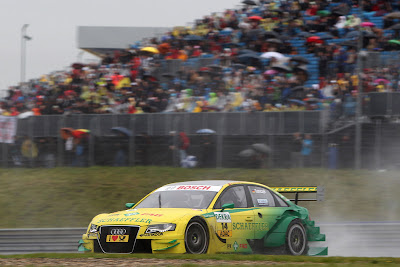 Another one-two-three victory for Audi in
the DTM
• Mattias Ekström dominates in the rain at Oschersleben
• Martin Tomczyk in second place after sensational recovery
• Nine-point advantage in the overall standings
Ingolstadt/Oschersleben, September 18, 2011 – Audi, Audi, Audi – only 14 days
after the one-two-three triumph in the rain battle at Brands Hatch the brand with
the four rings again took the whole podium at a DTM race in similarly difficult
conditions. At Oschersleben, Mattias Ekström (Audi Sport Team Abt Sportsline)
triumphed in front of leader of the standings Martin Tomczyk (Audi Sport Team
Phoenix) and rookie Edoardo Mortara (Audi Sport Team Rosberg).
For Audi this marked the 60th victory in total in the most popular international
touring car series, the sixth in the current season and an important step toward
another DTM title. With a sensational recovery Martin Tomczyk managed to advance
to second place after having started from position 14, extending his overall lead by
nine points before the last two races. Consequently, the Bavarian driver living in
Switzerland will already have the first match ball and chance of securing an early
title win for Audi at Valencia (Spain) on October 2.
On the wet track at the Motorsport Arena Tomczyk pushed forward to sixth place
right on the starting lap and was subsequently one of the quickest drivers in the
field. Nevertheless, he was kept on edge all the way up to the finish. After having
been touched by Jamie Green right at the beginning of the race the hood of
Tomczyk’s car came off on lap 18. “That caused me to completely lose the front
aerodynamics,” said the leader of the standings. “But we had so much mechanical
grip today that it didn’t even make such a big difference. Oschersleben was
extremely slippery in the rain today. When I saw that one car after the other in front
of me was spinning off the track I took it a little easier. That paid off.”
No less impressive than Martin Tomczyk’s recovery was the victorious drive of
Mattias Ekström, who by clinching his second success of the season narrowed his
gap to the runner-up in the standings, Bruno Spengler, to ten points. The Swede
pushed forward from fourth to second place at the start and only needed eight laps
to overtake the Canadian who had been leading up to that point. The two-time DTM
Champion then drove one fastest lap after the other and had an advantage of no less
than 42 seconds on crossing the finish line. “The car was simply fantastic,” said a
jubilant Ekström. “I can only say ‘thank you’ to my engineer and to the team.”
Similar sentiments were expressed by Edoardo Mortara, who mounted the podium
for the second time in a row and with a score of 21 points is now ranking in seventh
place of the standings in his first DTM season. “I’ve never driven a car in the rain that
has been as good as my A4 today; my engineer did an incredible job,” commented
the Italian, who shielded Martin Tomczyk against the cars behind him almost
throughout the race.
With Mike Rockenfeller on position six and the quickest in qualifying, Miguel Molina,
in eighth place two other Audi drivers scored points at Oschersleben. Molina
managed a good start. The Spaniard braked into the first turn on the wet track a
little too late though. Despite body contact with Timo Scheider he was able to
continue his drive and finally scored his overdue first point of the year.
After spinning twice on the starting lap Timo Scheider had started a similar recovery
as Martin Tomczyk that caused him to advance to fourth place. After 25 laps though
Scheider had to park his A4 DTM because a stone had destroyed the radiator.
After a turbulent race with several incidents Oliver Jarvis in ninth place barely missed
scoring a point. In difficult conditions Rahel Frey achieved her so far best DTM result
in twelfth place. Filipe Albuquerque was forced to retire after a collision with Ralf
Schumacher in which he was not at fault.
“We’ve seen very spectacular motorsport today,” said Head of Audi Motorsport Dr.
Wolfgang Ullrich. “Similar to the round at Brands Hatch our A4 DTM was extremely
strong in the rain. Mattias (Ekström), Martin (Tomczyk) and Edoardo (Mortara) again
drove tremendous races. We’re happy about our 60th victory and another fantastic
result for Audi.”
Audi Sport/for Acreditated and Autorized Media Press.
Posted by AmigosRacing/MRS GT. at 18:39