1.000 Km Silverstone: Karim Ojjeh is keeping his feet on the ground 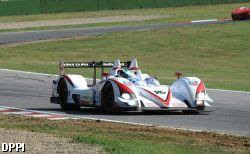 Karim Ojjeh is keeping his feet on the ground

Karim Ojjeh leads the drivers' classification in the LM P2 category and the teams' ratings with Greaves Motorsport so he is in the running for the 2011 Le Mans Series titles. He has won two races this season and the mythic Le Mans 24 Hours, but he's not making a big song and dance about it.

“Our aim at Silverstone is to go as quickly as possible, and to score as many points as we can,” he told us. “We're lucky enough to be able to count on a reliable, robust car, but it's not the quickest. We'll do our best to take up the challenge; it's going to be very close and very tough.”

While there are several factors that explain the success of the Greaves Motorsport team driver line-up completed by Tom Kimber-Smith and Olivier Lombard, Ojjeh thinks that luck has also played a part in it. “We've managed to avoid accidents but luck's been on our side too. We stripped down the car after the finish at Le Mans, and discovered a hole in the chassis! We also managed to avoid problems at Imola, so you can't ignore the luck factor. When you win races in these circumstances, you must be humble and keep your feet on the ground.”

Ojjeh, who has been a Le Mans Series regular for a long time, is hoping for the ultimate reward. “We'd love to win the championship title; it would be fantastic. But the other teams and drivers are redoubtable rivals. I've always preferred to be the hunter, and now we're the hunted! We're not too worried about it; we'll just do our best and no regrets if it doesn't work.