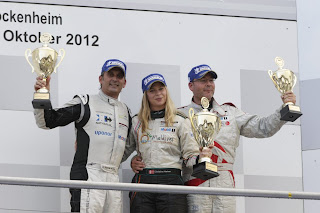 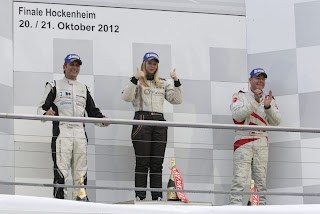 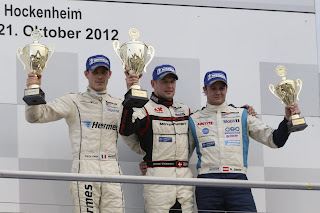 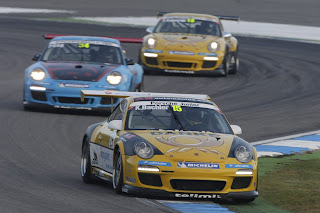 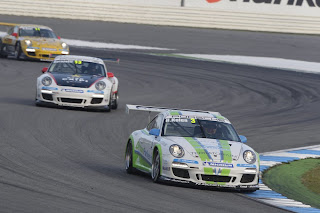 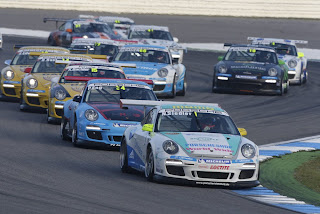 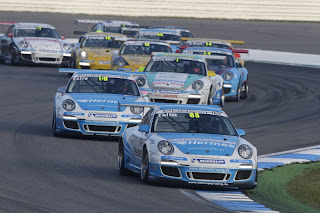 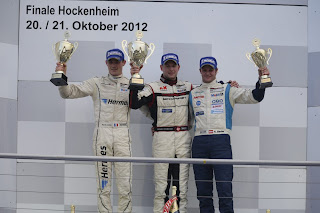 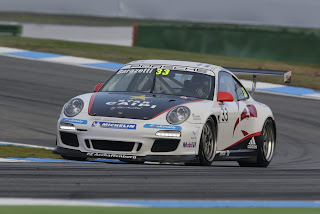 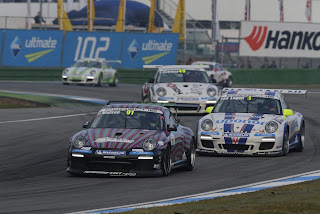 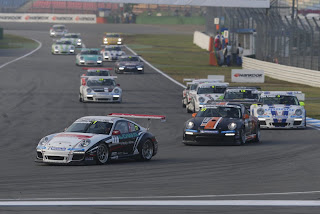 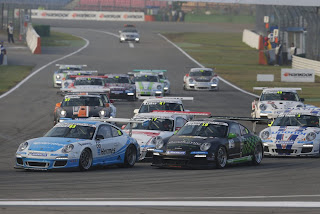 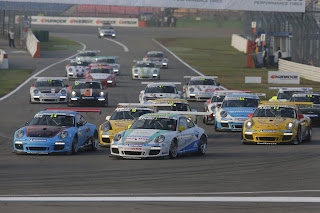 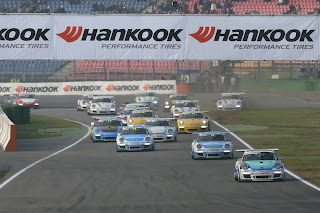 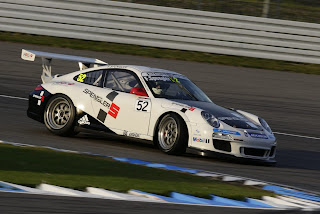 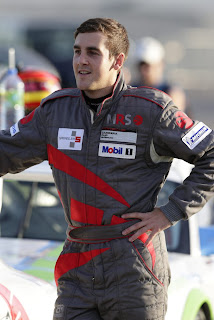 At the final race weekend of the season, Michael Christensen experienced a weekend of mixed emotions. After an outstanding qualifying which yielded him the fourth and second grid spots, only 0.009 seconds separated him from the pole-setting time for Sunday’s race. After tyre damage threw him to the back of the field on Saturday, luck was on his side today. When the fastest qualifier Sean Edwards (Great Britain, Team Deutsche Post by tolimit) was relegated to the eleventh grid position due to a sporting penalty, the young Dane inherited the first spot. And he made the most of it. With a dream start, Christensen pulled to the front of the field and, keeping his cool, drove a faultless race to bring home his first victory in the 450 hp Porsche 911 GT3 Cup. Only in the early phase, three time winner this season Nicki Thiim (Denmark, Hermes Attempto Racing) closed in on him. Thiim, however, lost the front lip of the 911 when he scraped over the kerbs and gradually fell back down the field from the eighth of 18 laps. Lap for lap, Christensen then succeeded in making up ground over Kévin Estre now running in second. Second place at yesterday’s race was enough for the Frenchman to take home the rookie classification for new-comers. Christensen is second in the classification, whereas Estre came to the Carrera Cup Deutschland in 2012 already with a wealth of experience as a Porsche race driver. He is the reigning champion of the French Carrera Cup and won the rookie classification of the Porsche Mobil 1 Supercup in 2011.

Michael Christensen’s success at the end of the season came as no great surprise. Already at race four on the Lausitzring, the Dane had snatched third place. He consistently qualified amongst the fastest in the highly competitive field but so many times had to pay tribute for his inexperience in the Porsche sports car. In the karting and Formula scene, the Dane is regarded as world class. His successes opened the door for a try out at the Porsche selection for talented youngsters. Last winter against strong international competition, he and Klaus Bachler were chosen to take part in the junior programme. Part of the support the two Porsche juniors receive in their Carrera Cup campaign is financial funding as well coaching by the long-standing professional race driver Sascha Maassen. In Hockenheim, the juniors were assisted by Porsche works driver Timo Bernhard while Maassen contested the ALMS in America. Porsche has actively and successfully supported talented youngsters since 1997.

For Klaus Bachler as well, another fourth place was a good farewell performance to the 2012 Carrera Cup season. He took off into the race from seventh on the grid and again underlined his skill at perfect starts and the right feeling where to safely get through any trouble spots. Already after the second lap, the 21-year-old was sitting in fifth, and with a clean overtaking manoeuvre then managed to slip into fourth – and there he became stuck behind Norbert Siedler. Over the entire second half of the race, the junior put the seasoned racer under pressure and played his card. But Siedler fended off the attacks with all means possible, leaving Bachler without any chance to get past. The junior narrowly missed out on clinching his second podium result after his third place at his home race in Spielberg. Bachler concludes the season in third place in the rookie classification behind Christensen. The young Austrian also launched his career the classic way in the kart. In 2007 he shone in the Formula Lista with five victories and the junior title, two years later he secured the vice-championship of the ADAC Formula Masters with ten podium places and two victories. Last season he ranked third overall in the ATS Formula 3 Cup with two race wins.

The junior from the Styria region of Austria also celebrated his best result for the Team Deutsche Post by tolimit with fourth place. Behind him in fifth came his teammate Sean Edwards. For the title favourite and vice-champion, the weekend was a bitter disappointment. He travelled to the Hockenheimring with high hopes of taking home the trophy. But again tyre damage robbed the race leader of his dream. Because Edwards took a shortcut to pick up a new tyre during race 16 on Saturday and left the track, he was black-flagged. He ignored this, however, and was disqualified from yesterday’s race and received a penalty which saw him relegated ten grid positions down the field for the final race.

On 22 October, the Monday after the race weekend, news station N24 televises the 30-minute “Porsche Carrera Cup Magazin” at 18.30 hours. Sport1 will again televise the final race this afternoon from 16.00 hours in full length and airs Carrera Cup highlights on Saturday, 3 November, from 18.00 to 18.30 hours.

Michael Christensen (Porsche Junior, winner): “That was a fantastic race for me. I have been trying since the start of the season to achieve this result. Today everything paid off from what I’ve learned in my year as a Porsche junior in the Carrera Cup. Over the last months I’ve worked hard on reaching this goal. My start was good and that was important. Afterwards I controlled the race. I just had to focus on driving a clean race to the flag. And it seems as if that worked.”

Kévin Estre (second): “To start from fourth and finish in second was a good race for me. All in all I pleased with the weekend and my two podium results. Nicki and I were driving the same pace early on but then he lost the front lip of his 911. I slipped past and was keen to go after Michael but he was simply too quick.”

Norbert Siedler (third): “Third place is okay for the final, especially after starting from fifth. The speed was there but unfortunately I experienced a lot of oversteer so I couldn’t get any further ahead.”

Klaus Bachler (Porsche Junior, fourth): “That was a super race! I started from seventh and finished in fourth. In the first lap there was a minor incident when René’s and my car touched. But nothing happened. A couple of laps later I overtook Philipp Eng and that was really good. My car ran well from the first to the last lap. I caught up to Norbert and even managed to overtake him in the hairpin, but he got past me again. I kept fighting to the flag but I didn’t really get another chance to pass. Now I’m eighth in the overall ranking and third amongst the rookies. I’m happy with that.”

Timo Bernhard (Porsche works driver, junior coach): “That was of course a wonderful conclusion for the Porsche juniors, a real highlight, crowned with Michael Christensen’s victory. Congratulations to him. He did everything perfectly right from the start. Michael put the pressure on over the first few laps so that he could build up a gap to the others and control the race from then on. But Klaus Bachler also did a super job. He came from seventh and had moved into fifth place after two laps. An overtaking manoeuvre put him in fourth place and then he pressured Siedler. It would have been fabulous if both juniors had climbed the podium today.”