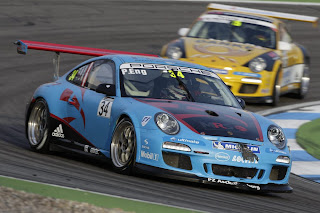 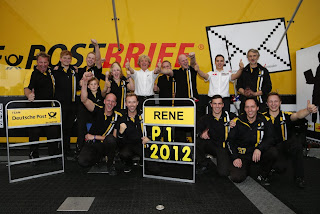 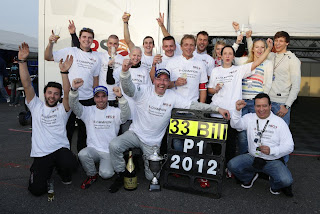 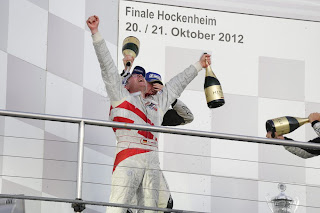 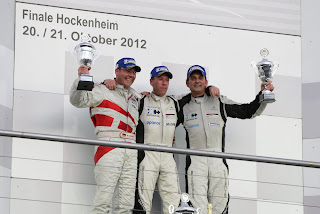 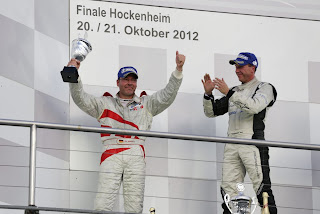 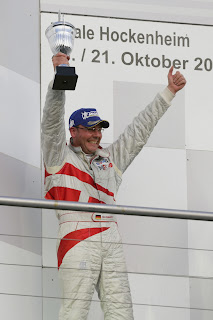 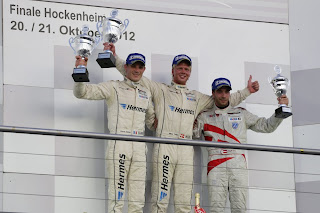 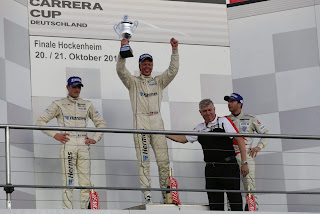 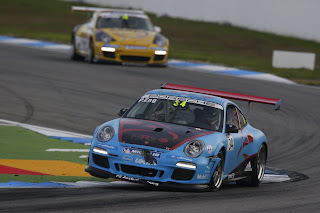 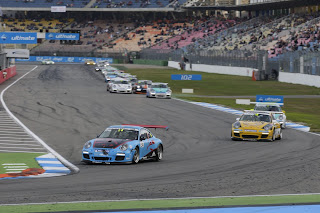 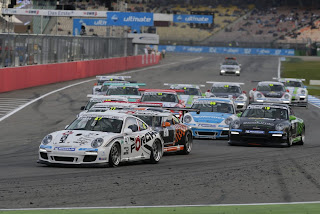 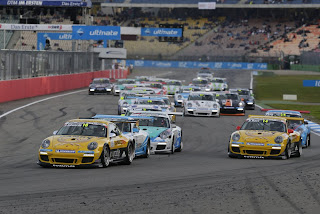 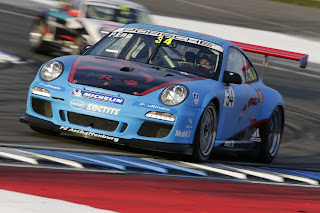 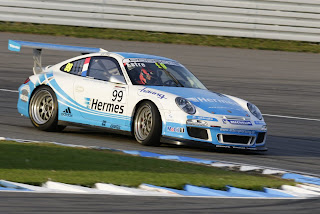 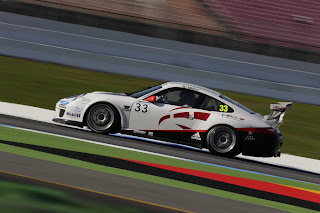 Stuttgart. The 16th and penultimate race of the Porsche Carrera Cup Deutschland had all the ingredients of a thriller – above all for the title favourites René Rast and Sean Edwards from the Team Deutsche Post by tolimit. Seventh place was enough for the German to claim an early championship victory in Germany’s fastest one-make race series, whilst the Briton had to settle for runner-up honours after retiring with tyre damage. Victory at the gripping 14-lap sprint on the 4.574 kilometre Hockenheimring went to Denmark’s Nicki Thiim ahead of his French teammate at Hermes Attempto Racing, Kévin Estre. Austrian Philipp Eng driving for MRS GT-Racing clinched third place. The amateur classification was also decided today: “Bill Barazetti” (Germany, MRS GT-Racing) took home the title with 240 points.

At first it looked as if there would be a change at the top of the overall classification. Sean Edwards turned his pole position into a clear lead. The cameras, however, lingered on René Rast’s yellow Post-911. In the melee of the first lap, Rast was accidently nudged into a spin in the hairpin and rejoined the race action from the back of the pack. The 25-year-old’s chase through the field was breathtaking. While Edwards pulled away at the front of the pack, his rival from the same race squad was determined to reel in his opponents one by one. The decisive point came in the ninth lap when tyre damage buried Edward’s dreams of victory. Although the team tried to salvage the Briton’s chances – a puncture had already cost him the season-opening round on the Hockenheimring – by changing the tyres, it was in vain.

With this, the championship winning Team Deutsche Post by tolimit opened the door for Hermes Attempto Racing to score its first double victory this season. For Nicki Thiim, the son of the former DTM champion Kurt Thiim, this marked his third win of the season. This result cemented third in the overall classification for the Dane. Claiming a podium spot in Hockenheim, Kévin Estre has earned himself the 2012 Rookie of the Year title.

Porsche junior Klaus Bachler also celebrated at the finish line. Driving for Team Deutsche Post by tolimit, the Austrian made a perfect start from eighth. He avoided any trouble and emerged from the first lap in fifth. Through Edward’s retirement, he inherited fourth place and only narrowly missed out on a podium result. His junior colleague Michael Christensen experienced extremely bad luck. Competing for Konrad Motorsport, the Dane lined up on the grid in fourth after an excellent qualifying and expected to make up more positions in the race. In the tumult which claimed Rast, Christensen also lost ground. He found himself running in a disappointing seventh position before tyre damage put an end to his race altogether. The only consolation: In Sunday’s final race the 22-year-old starts from second on the grid. Only 0.009 seconds separates the Porsche junior from the pole-setting time of Sean Edwards.

For the 23rd season of the Carrera Cup Deutschland there were several attractive additions – amongst others an Amateur Class was introduced. And now the first champion of the fiercely-contested classification has been decided: Competing for MRS GT Racing under a pseudonym, hobby driver “Bill Barazetti” clinched the title. The dentist from Stuttgart in Germany held a 19-point lead over his closest rival, Dutchman Wolf Nathan (FE Racing by Land-Motorsport) at the 16th race and made the most of it: Second place handed him the title.

“Awesome,” said a pleased Barazetti, “If someone had told me at the beginning of the season that I’d win I would have said they were crazy.” The secret to his success was consistency. “With the exception of one race I always finished and regularly climbed the podium. It is also thanks to a tremendous team effort,” said the 42-year-old. At the season highlight on the Nordschleife, the level-headed amateur driver took over the points lead – and never relinquished it. However, the new champion only climbed to the top of the podium once during the season, at race 15 in Oschersleben.

The final race takes off tomorrow at 9.35 hours and can be viewed in high quality live on the official Porsche website (www.porsche.com) - with editorial clips prior to the actual live-streaming, live-timing and a commentary in German and English. On 22 October, the Monday after the race weekend, news station N24 televises the 30-minute “Porsche Carrera Cup Magazin” at 18.30 hours. And on Sport1, Carrera Cup highlights will be aired on Saturday, 3 November, from 18.00 to 18.30 hours.

Nicki Thiim (winner): “The race for me today ran like clockwork. My dream was to finish up the season in Hockenheim with a good result. For my team and me, our performance at the penultimate race was the absolute best thing that could happen to us: a double victory at last this year.”

Kévin Estre (second): “That was a good race for me. I came from seventh so second is a great result. My car was quick and very consistent. So I should be sorted out for tomorrow’s race too. To become the rookie champion is a success for me. That’s what I was in the 2011 Supercup, now I’ve won that title in the Carrera Cup. For the first season I can be very pleased.”

Philipp Eng (third): “What an unbelievable race. I’m proud of myself and the whole team. This is the result I’ve been working for over the whole season. Now let’s see what we can do for the last race tomorrow.”

Klaus Bachler (Porsche Junior, fourth): “That was a great race for me. I was already pleased with eighth in qualifying, because the gap to the front was okay and I knew I’d perform better in the race. My start was great and I moved into sixth. I then inherited fifth after the chaos in the hairpin and then suddenly fourth when Sean retired. At the flag I was close to Philipp Eng, but it wasn’t quite enough for third.”

Michael Christensen (Porsche Junior, 21st): “My start was good. I think I was concentrating too much on the gap to René in front of me and didn’t keep an eye on those behind me. In any case, Philipp Eng managed to pull alongside. In the traffic I had to swerve to the inside to avoid a collision. That was really close and confusing. But the reality is that I lost several positions in the melee and ultimately had tyre damage. Tomorrow I start from second – and I’m determined to bring home a podium result.”