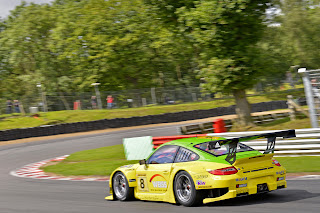 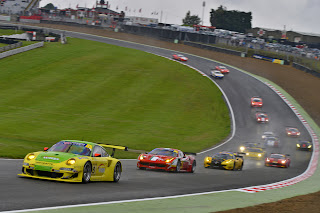 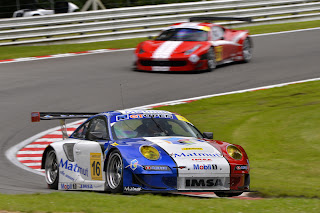 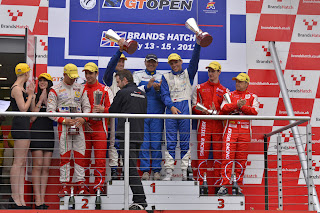 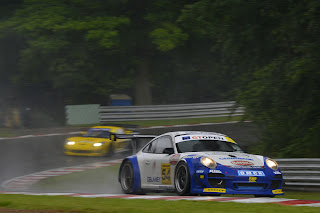 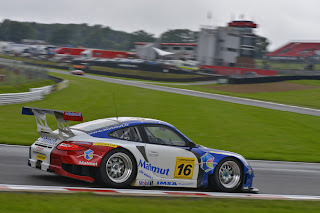 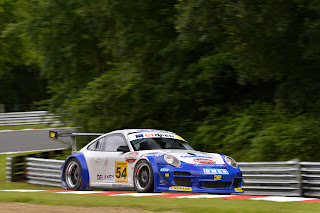 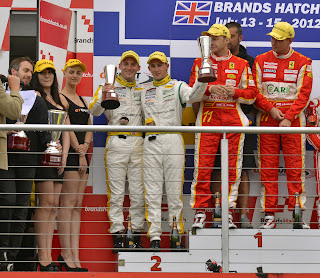 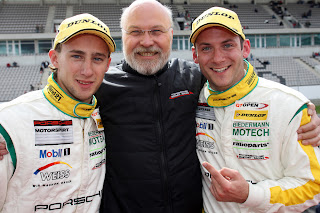 Stuttgart. The situation at mid-season for Porsche customer teams in the International GT Open could hardly be better. Clinching second place at yesterday’s seventh race of the season in Brands Hatch put Porsche works driver Marco Holzer (Germany) and Manthey-Racing pilot Nick Tandy (Great Britain) with their Porsche 911 GT3 RSR back at the top of the drivers’ championship. They also lead the Super GT class in which the top model of Porsche customer racing is also awarded points. With their double victory in the 911 GT3 R at Brands Hatch, the British-Italian pair Archie Hamilton and Marco Mapelli, driving for Autorlando Sport, moved into second place in the GTS class – just one point shy of the leaders.

Once again, the weather proved unpredictable. Heavy rain plagued the 70 minute race seven on Saturday, with Sunday’s 50 minute meeting run on a dry track. During the rain race, Marco Holzer Holzer and Nick Tandy gave a brilliant performance. Taking off from the second grip spot, local hero Tandy snatched the lead and handed the wheel to Holzer at the mandatory driver change whilst still in the lead. The 23-year-old and youngest Porsche factory pilot then had to sit in the pits for his 15-second handicap, a regulatory consequence of winning the last race of the GT Open in Spa-Francorchamps. The handicap system is designed to avoid series of victories. This made Holzer and Tandy’s second place even more impressive – just two seconds behind the winner. “If we’d had just one more lap perhaps we could have even finished first,” Holzer stated. “But second place has again earned us points in our bid for the championship and that’s what counts.”

Sunday’s race also looked promising early on. Holzer took off from fifth on the grid and after just a few laps had already moved into the lead. But at the pit stop, he not only had to wait out the 25-second handicap. A small fire in the rear of his car, which luckily proved harmless, cost him more time. “It was very likely from rubber debris catching fire,” says team boss Olaf Manthey. Running a lap down, Tandy took up the chase only to be struck by the misfortune of getting caught behind the leading car during a safety car phase. And he got stuck. Ultimately, they saw the flag in twelfth. “Aside from the points for second, the most important thing we take with us to the next races is that our 911 runs beautifully in the wet and the dry,” summarises Holzer. “Once again, our team did a top job.”

A banner weekend as well for the Italian Autorlando Sport squad. Two class wins in Brands Hatch mark the best results for the two young pilots Archie Hamilton and Marco Mapelli. At his home race, local hero Hamilton benefited from his knowledge of the track, with the strong Italian putting in a performance equally as inspired. The balance at mid-season: three wins, a podium placing and second in the GTS class. “It’s totally awesome that we scored two victories on this challenging circuit,” said a delighted Mapelli. “The first races of the season were not so easy for my teammate because as a newcomer he still had to familiarise himself with the 911 and didn’t want to damage it in any way.” Clinching third place in the GTS class, Matteo Beretta and Marcello Puglisi made the Autorlando triumph perfect. This is the first race for the two Italians in the International GT Open.

After yielding a commendable fifth in Saturday’s race and being plagued by bad luck in Sunday’s meeting, the French IMSA Performance Matmut left Brands Hatch disappointed. “In my long career, I’ve rarely experienced something like this,” said an irritated Porsche works driver Patrick Pilet (France), who shared the IMSA 911 with team owner Raymond Narac. “On the way from the pits to the grid I wanted to overtake a slower car which was driving on the line. When I came alongside him he pulled to the left without warning and hit the front of my 911. A damaged car and losing the points’ lead is the bittering disappointing consequence. And we had such good chances today of bringing home a podium result. The only positive outcome is that next weekend is our home race in Le Castellet and we have less handicap seconds to worry about – and the top contenders are still lying close in the rankings.”

Races 9 and 10 of the International GT Open are contested from 20 to 22 July in Paul Ricard/France.

Super GT: This class is based on the FIA GT2 regulations - the 911 GT3 RSR competes here. The particularly efficient six-cylinder boxer engine in the International GT Open version delivers significantly more than 500 hp.