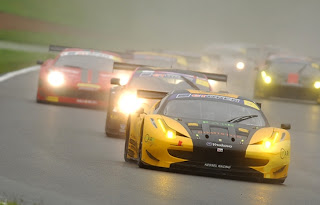 Peter-Broniszewski beat the rain at Brands.

14.07.2012
Philipp Peter and Michal Broniszewski took a superb win in a soaked Race 1 in Brands Hatch. The Austrian and the Pole conducted a perfect race, despite the difficult conditions, and took their second overall win in the series, after the success in Monza 2011, with the Kessel Racing Ferrari. Second came the Porsche Manthey of Nick Tandy-Marco Holzer, now the new points leaders, and third the aabar Villorba Ferrari of Andrea Montermini-Cochito López, who led in the initial laps.
In GTS, the Autorlando Porsche of local hero Archie Hamilton and Marco Mapelli took a clear win ahead of the two Kessel Ferraris of Zampieri-Dalle Stelle and Mantovani-Cecchellero.
Dry weather but wet track for the start, as poleman Montermini takes the lead ahead of Tandy, who attacks fiercely, then Bruni Peter Malucelli, Hamilton, Rugolo and the pack. The track is treacherous and Alexander spins in lap 2, imitated in lap 3 by the Corvette of Ramos, who was fighting with the other Vette of Sijthoff.
In the lead, Montermini increases the gap up to 5 seconds, while Peter takes third from Bruni in lap 8. The rain starts again soon after, surprising Talkanitsa sr., who spins and hits Rugolo (lap 12)at Druids, but also the leader Montermini, who goes out in the gravel and loses three positions. Also Bizzarri, second in GTS, spins at Clearways, losing a position to Dalle Stelle in GTS, where Hamilton is a comfortable leader.
In the lead, Peter is closing on Tandy, as the driver change window opens.  After the pit stops, Broniszewski leads with 16” over Leo, 17”on Holzer, then Lopez, Mapelli, Barba, Rizzoli, Pastorelli and Pilet. The attentions is all for the duel for second between Leo and Holzer, with the Italian defending well for a long while. The German will eventually pass and start chasing Broniszewski, who has a slight off at Druids in lap 34. In the final laps, López passes Bruni for third while Broniszewski resists well in the lead and takes a superb win.
International GT Open.
Posted by AmigosRacing/MRS GT. at 20:42