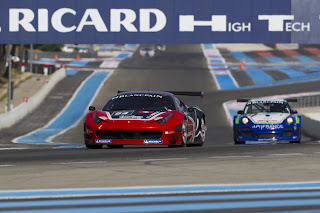 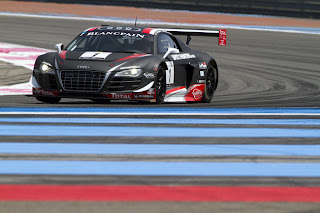 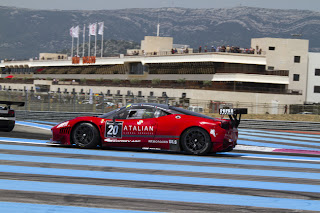 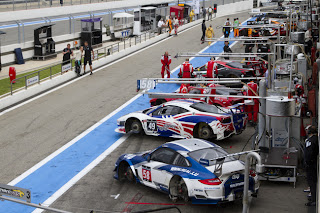 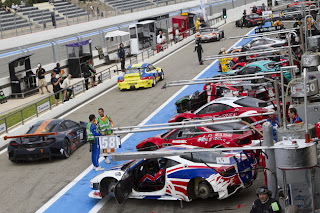 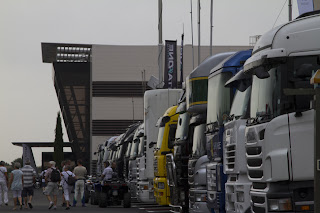 Ferrari led the way in Qualifying at Paul Ricard in the third round of the Blancpain Endurance Series with Daniel Zampieri (ITA) in the PRO class No.71 Kessel Racing Ferrari 458 Italia setting the fastest overall time of 1:57.208 to clinch pole for this afternoon’s three-hour race.

“I managed a few laps and only found that one was clear and good enough to set a time, so this made it quite difficult but that lap was good enough for pole so I’m really happy,” Zampieri said.

“It felt good to be able to finish off Qualifying on top in all three sessions so special thanks to my team-mates Stefano (Gattuso) and Davide (Rigon).”

“In terms of the car it felt good out on the track and even though there was reports of rain it didn’t make a difference so that was lucky. Now we look forward to the race this afternoon, we’re still working out who will drive first, second, third but I think we’re all hopeful for a good result.”

Second, and heading the PRO-AM class was the Black Bull Swiss Racing No.64 Ferrari 458 Italia of fellow-Italian Mirko Venturi with a best lap of 1:57.304.

Venturi admitted that finding a clear lap in the traffic was the challenge of Qualifying. “We had the same problem as Kessel Racing and others, the track was not clear enough to set a sufficient amount of laps,” he said.

“If this wasn’t the case I feel we would have been pole today because on the last lap I was nearly half a second faster but was held up by traffic on the last corner.

“With Qualifying in mind I think we’re looking good for the race, second isn’t a bad place to start and we’ll hopefully push ourselves into first place quite quickly.

“The car is set up very nicely which obviously works in our favour. Bearing in mind we’re very near the front of the grid, our plan is to start with me driving this afternoon.”

In the Gentlemen Class, Jocke Mangs (SWE) made a last-gasp charge to set the fastest time in the category of 2:01.124 in the JB Motorsport Audi R8 LMS.

Mangs is relishing the battle with their closest class rival the GCR Racing/Guy Clairay Dodge Viper who he pipped for pole.

“The car did well today in Qualifying if you consider the added weight and restricted power we are running with at the moment. The car is feeling good to drive, nicely balanced and predictable which I think made our last minute time possible, ahead of the Dodge Viper.

“Our time was 2:01.124 and I think this is the maximum we could have got out of it with today’s conditions and restrictions. Now for the race this afternoon, we have a good team and I think we’ll be able to finish in a good place.”

The brilliant sunshine and warm temperatures of yesterday gave way to heavy cloud cover for the Qualifying session. Forecasters are predicting that rain could fall during today’s race which starts at 14:15 local time.

Live streaming of each race will also be shown on the official web site www.blancpainendurance-series.com

The series will feature in live broadcast across 22 channels globally with a number of other key broadcasters showing extended highlights in territories such as Europe, Australia, North America and Latin America.

Bloomberg Television will also broadcast highlights worldwide (Americas, Pan Euro, Middle East, Africa and Asia-Pacific). That all adds up to a global audience reach of over 350 million homes.

Motors TV will carry live coverage to viewers in over 20 countries across Europe.