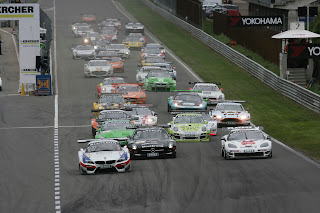 
The 2012 ADAC GT Masters has been anything but predictable, with four different winners in the four races so far contested. BMW ALPINA, Porsche, Corvette and BMW have each chalked up a victory. The Super Sports Car League now moves on to the rollercoaster circuit in Saxony. With possibly more at stake than most of the other contestants on the third race weekend of 2012 will be local teams Schulze Motorsport (based near Leipzig) and YACO Racing powered by Jochen Schweizer (based in the Vogtland). Also determined to break a run of bad luck will be ex-Formula 1 and DTM driver Heinz-Harald Frentzen; the Callaway Competition driver has been agonisingly close to a podium finish on several occasions already this year, and together with co-driver Andreas Wirth, he will be aiming to rectify the deficit this time round.


With three victories in six races, Formel ADAC newcomer Marvin Kirchhöfer has established a solid lead in the standings after the first two outings of the 2012 season. Next weekend, the ADAC Sport Foundation protégé contests his home race at the Sachsenring. "I've managed to win three out of the first six races, and I'm hoping this run continues on my home circuit," says the Leipzig-based driver. The venue near Chemnitz also counts as a home race for Florian Herzog from Dresden. However, contestants from further afield won't be showing any special deference to the two local favourites; in the six races staged so far, nine drivers from six countries have ascended the podium, with the top step having been occupied by four young talents from different countries.


The ATS Formula 3 Cup also promises to be a fascinating spectacle for fans at the Sachsenring. After the first three races of 2012, the Top Three are separated by only two points, and the first four in the standings are from four different countries. Leading the pack is Lucas Auer from Austria; the nephew of ex-Formula 1 driver Gerhard Berger is narrowly ahead of Mitchell Gilbert (Australia) and Jimmy Eriksson (Sweden). Guaranteeing extra excitement this season is the new push-to-pass system on the ATS Formula 3 Cup cars. This ten-second-long 20bhp power boost is available up to a maximum of ten times in each race.


Clear favourites emerged in both divisions of the ADAC PROCAR series during the first two race weekends of the season: in Division 1, Jens Weimann won all four races at the Motorsport Arena Oschersleben; in Division 2 at the Circuit Park Zandvoort, Guido Thierfelder similarly blew away the opposition with four victories. At the Sachsenring, the pursuing pack will be determined to put an end to both winning streaks. The most likely candidates to turn the tide are Paul Green and Andreas Kast in Division 1 and reigning champion Nils Mierschke in Division 2.


The 2012 MINI TROPHY is the successor competition to the highly rated MINI CHALLENGE. Ralf Martin heads the standings as the series goes into races five and six of the season. Martin's Gigamot Racing team-mate Stephanie Halm, the fastest woman in the MINI TROPHY, is hot on his heels in second position, just six points behind. Their closest pursuers are Thomas Tekaat and Austrian driver Jürgen Schmarl. Cora Schumacher will once again be hopping into the cockpit of her MINI John Cooper Works Challenge which is powered by a 1.6-litre turbo engine packing 211bhp (155 kW).

Motorsport fans who are also interested in the European nations football championship will be able to follow the latest action at the Sachsenring too: when Germany plays Portugal in the first group match of the competition on Saturday 9th June at 8.45pm, the fans at the Sachsenring won't miss a single goal. The championship game will be broadcast live on a giant screen near grandstand T6. Getting everyone into a party mood for the evening of football will be Public Dawn: the rock band from Hohenstein-Ernstthal will be staging an indoor concert on Saturday evening in the vicinity of the Sachsenring Tower starting at 7.30pm. Admission to the 'Public Viewing' of the EURO 2012 match and to the Public Dawn concert is free.