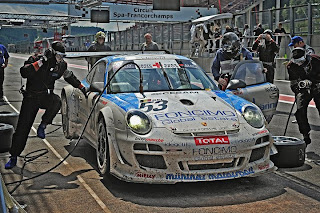 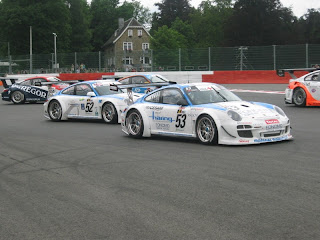 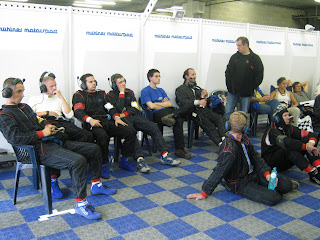 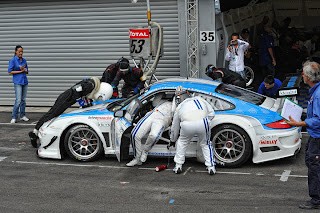 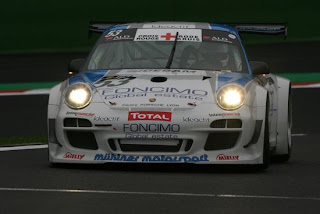 Francorchamps. The Spa-Francorchamps, Belgium based Muhlner Motorsport Team have this year again achieved a class win in their home event, the Spa 24 hours.

The Muhlner Team, notably successful in endurance events, were running two Porsche 911 GT3- R in the event. The number 52 car was driven by Armand Fumal, Gianluca De Lorenzi, Jerome Thiry and Mark J. Thomas. Fumal (2005) and Thomas (2008) had both already achieved GT3 class wins with the team in this event.

The number 53 car was driven by Muhlner regulars Dr. Jurgen Haring, Taki Konstantinou and Gilles Vannelet, the three joined by the very experienced Arnaud Peyroles. Haring and Konstantinou have been driving for Muhlner Motorsport since 2008 in the ADAC GT Masters and in some events of the FIA European GT3 Championship. Vannelet won the FIA European GT3 Championship in 2007, Arnaud Peyroles won it in 2008.

In qualifying neither car did much mileage and did not join the chase for a good grid position, something which is pretty irrelevant to a 24 hour race. Positions 30 and 32 on the grid were thus not really reflective of the true performance of the cars.

At daybreak the 53 was running in the top 10 and 4th in class -- given the large and high quality field for this year's event, not something which had been expected.

But it got even better -- with consistent good laptimes the 53 worked its way up into 3rd in the class and then problems befell the competition who had to make unplanned pitstops for repairs.

When a few problems started to show in the gearbox/clutch, and given that two otther Porsches had shortly earlier had to change their clutch, Renate-Carola Muhlner decided to accept the loss of places in the overall race and slow the car down to get to the finish and ensure the class win.

Thus at the flag the Muhlner Motorsport team was 6th overall and had its 8th class win in the Spa 24 hours event.

"What a fantastic result, to win the class again in the strongly contested FIA GT3 class as privateer team with gentleman drivers against works competition. A 6th overall in such a competitive field with so many top works teams is also a huge success for us" was Bernhard Muhlner's evaluation of the result "however, I'm a bit disappointed that our other car, which was already up to 8th overall after 6 hours, had to retire with a technical problem in the drivetrain somewhere out on circuit. Otherwise we might have not just been celebrating our 8th win but maybe our 4th one-two...but no matter how well your prepare for an event, technical problems can still arise."