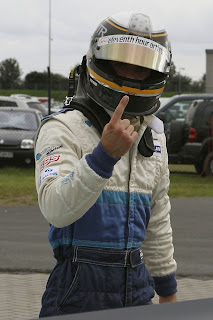 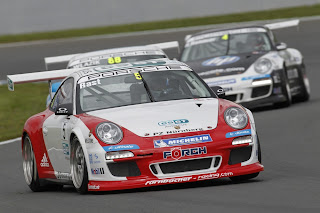 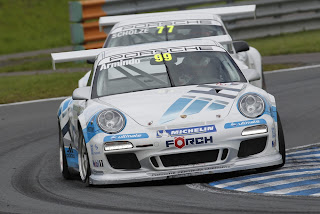 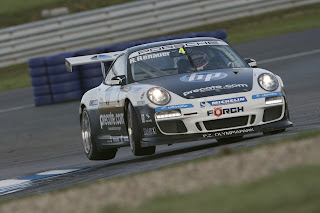 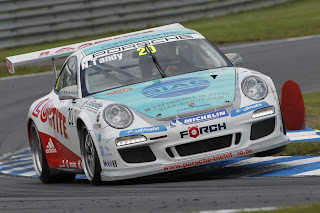 Stuttgart. Suspense mounts in the race for the title of the Carrera Cup Deutschland. Nick Tandy, second overall in the points’ standings, snatched his fifth pole position of the season for round eight. In the Porsche 911 GT3 Cup fielded by Konrad Motorsport, he lapped the 3.696 kilometre circuit in the Motorsport Arena Oschersleben in 1.30.276 minutes. With this, the Briton beat the second qualifier by 0.267 seconds – a world in Germany’s fastest brand trophy series and a challenge for Nicolas Armindo, who only takes up the race in Germany’s Magdeburg region from fourth place. The Frenchman heads the championship with a seven point lead over Tandy.

Nick Tandy, who claimed vice-championship honours in the Porsche Mobil1 Supercup a week ago in Monza, virtually mocked his rivals in that he bettered his own best time in the course of the qualifying session twice. The irony: Taking up the 22-lap race alongside him on the front row is his greatest adversary from the international Porsche Mobil1 Supercup – the freshly crowned champion René Rast. The German contests round eight as well as the Carrera Cup final on the Hockenheimring for the Farnbacher Racing – PZN squad as a guest driver.

Turning the third best time in qualifying, Robert Renauer from Germany, currently sitting fourth in the overall classification, has a good launching position to go for third. For the penultimate round of the season, points’ leader Nicolas Armindo starts alongside the Herberth Motorsport PZ Olympiapark pilot in fourth. The Frenchman (team Hermes Attempto Racing) had no answer to his toughest rival Tandy’s best time, because he ruined his tyres in the gravel trap – a totally unusual occurrence for the perfectionist – and was unable to improve on his time.

Taking up the challenge on the twisty track from the third grid row are Martin Ragginger and Philipp Wlazik. The Austrian driving for Schnabl Engineering was quick on individual sections, but did not manage an entire perfect lap and posted fifth position. For Wlazik, Armindo’s young teammate from Hermes Attempto Racing, sixth marks his second best qualifying result this season. Currently ranking seventh overall, the German only yielded a better spot on the grid in Zandvoort with third.

Briton Sean Edwards (Team Deutsche Post by tolimit) and Robert Lukas from Poland (Förch Racing) start from seventh and eighth. Directly behind the two in ninth is Uwe Alzen, who sits third overall in the points. This promises plenty of action for the spectators who get a great view from all round the circuit. The Herberth Motorsport PZ Olympiapark pilot from Germany is famous for his fighting spirit and he’s not afraid of overtaking on any track, regardless if it’s difficult or not – as it is in Oschersleben. Sascha Maassen (Germany, Team Deutsche Post by tolimit) rounds off the top ten qualifiers.

Nineteen-year-old Ferdinand Stuck (Germany), who receives support as a “Porsche Motorsport Talent”, takes up the eighth round of the Porsche Carrera Cup Deutschland from 20th on the grid. The youngest driver in the series competes for Farnbacher Racing – PZN.

Nick Tandy (pole-setter): “The fifth pole in eight races – I can hardly believe it and can only say, super team, super car! The most important thing is that I start in front of Nicolas. And if everything runs smoothly I can make up more than just two points on him.”

René Rast (second in qualifying): “We changed our set-up slightly after yesterday’s practice which turned out to be a mistake. When we changed it back everything ran as it should again. Second on the grid is a great result. As a guest driver I have nothing to lose really, so I’m hoping for a clean start – and then we’ll see what happens.”

Robert Renauer (third in qualifying): “An interesting grid position between Tandy and Armindo... I wouldn’t much like to get tangled up in their fight for the championship, but of course I want to attack. After all, it’s about the team championship now and my first podium result this season.”