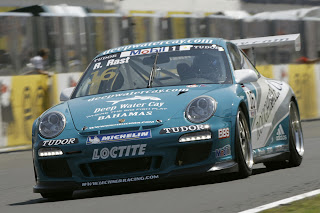 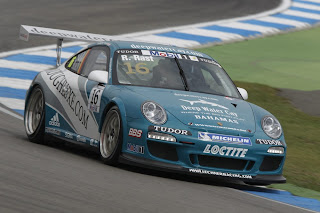 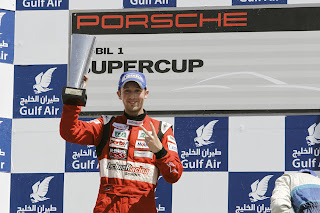 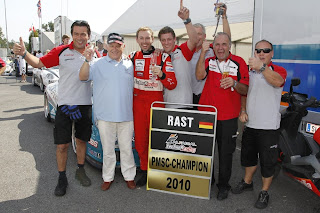 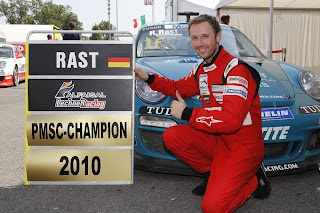 “It’s important that I have fun”

Stuttgart. René Rast certainly made things riveting to the finish: Only at the final in Monza on Sunday, the 23-year-old German secured the Porsche Mobil1 Supercup title . "That was a tough fight," he said after the last race of the season for the world's fastest international brand trophy series. "I'm very happy to have won the championship. That was my greatest goal."

Last year, in fact, the young German was a contender for the title. The talent was there, only experience was missing. When he celebrated his first victory in Silverstone he had already missed the championship train. Despite clinching five victories in 2009, Rast only took home vice-championship honours. This season he has four wins under his belt and won the title. “If you want to win a championship,” he says, “you also have to know when to hold back. That’s not easy because race drivers always want to win. But this is something I have learned.”

This year he didn’t wait as long to bring home his first victory. On the contrary, he won both races from pole position at the double-header in Bahrain, impressively underlining his title aspirations. Zero points from Barcelona were not so upsetting, as he went on to take victory in Monaco and followed it up in Valencia. The stress that faces the points’ leader at every round of the Porsche Mobil1 Supercup with its top-class grid line-up didn’t cause the Al Faisal Lechner Racing pilot any sleepless nights. He has always managed pressure well. “I tackle every race in a calm and cool-headed way,” he says, “any other way is useless.” His proof: He took up four races from pole position, and he climbed the podium every other time he reached the flag, except from Monza. An impressive track record.

For Rast, the strong competition in the Porsche Mobil1 Supercup was never a problem, but a challenge instead. Even as a kid this approach yielded success: At four years old he contested his first race – with an electric car on a Supermarket parking in his home town of Steyerberg. “My opponents were good and twice my age,” he remembers. “But I still wouldn’t let them win.” After a short detour to Motocross, his uncle put him into a kart as a seven-year-old. From this point on, he worked hard to develop his racing career: In 2003 and 2004 he contested the Formula BMW, in 2005 he won the VW Polo Cup before going on to become vice-champion of the Seat Leon Supercopa in 2006. Rast sat at the wheel of a Porsche 911 GT3 Cup for the first time in 2007. A year later he won the Porsche Carrera Cup Deutschland.

“For me the only important thing was to go racing - in beautiful cars, the faster the better. Actually, I wasn’t really interested in the race series,” admits René Rast. And nothing has changed since. “The most important thing for me is to have fun. And if I can make a living out of it, all the better.”

Despite the enthusiasm, René Rast is not one to think about motorsport day and night. “I take it very seriously, of course, but you also have to have a distraction,” he says. At home his distraction is sport, above all cycling and fitness – and playing on the football table at his parents’ place. He likes to go to the movies or meet up with friends. These are the diversions he needs between races. But over the next few months he won’t have too much time for leisure. In January he sits his final exams as an office clerk and for this, he smiles, he has to, “pull one or two text books out of the corner. During the race season, my studies are somewhat neglected.”

Winning the title is perhaps an early reward for passing his examination. In any case, it is a great opportunity to take a look at his successes this year. This is what René Rast says about...

... the key to his success:
“That was for sure due to our consistency. We were fast at every race and as far as speed was concerned we were always in the top three. In a brand trophy with so many strong drivers like the Porsche Mobil1 Supercup, it’s particularly important to always finish up the front. Without this consistency, you might win one or two races but you’ll never be champion.”

... his best victory:
“It was a huge relief to win the season-opening races in Bahrain. Before the season took off, I was not sure if everything would go as smoothly as I imagined. But from that point on everyone knew I was fighting for the championship, despite being with a new team. In Bahrain I showed in which direction the season would go. And that was very important.”

... his Al Faisal Lechner Racing team:
“A very professional team. Right from the start I got on well with the mechanics and the engineers, although we’d never met before. In preparation for the season we had one day of testing in Bahrain, but you could already see at that point that everything would work very well between us. In fact, we never had any problems. Every driver dreams of such a crew. Walter Lechner and his squad have been in the business for a very long time. That’s probably why they can get used to a new driver so quickly.”

... his strengths:
“I’ve learned that you have to be able to compromise sometimes if you want to win a championship, and be happy with second or third. Okay, a race driver always wants to win, that’s simply part of the package. If you are not first, you get frustrated. But a good race driver is one who keeps his cool in challenging situations and doesn’t do anything stupid, but instead says: Good, now I’ll take these points home for second and third and at the next race I’ll be back in force.”

... his dreams:
“I want to continue racing. To do something you love and make a living out of it is a real privilege and I’m very grateful for this. And for this, I’ll be doing my best in the future, as well.”