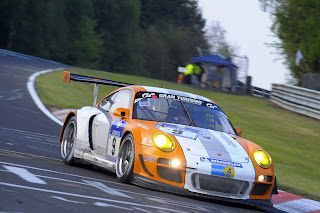 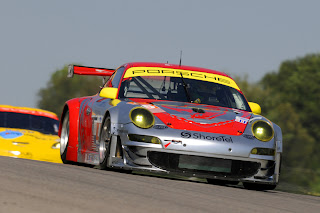 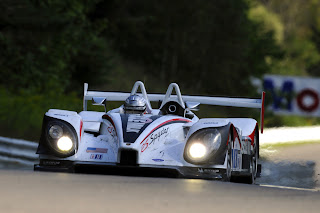 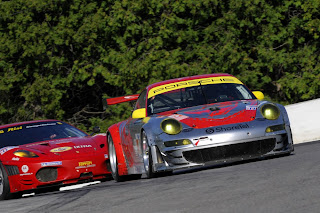 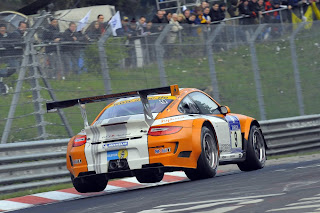 Stuttgart. A gripping finale in the American Le Mans Series: At Petit Le Mans, the 1,000 mile classic on the Road Atlanta circuit, the title decision in all classes goes down to the wire on 2nd October. For fans of the racing series featuring the world’s fastest sports cars, another highlight awaits them on the established circuit in the US State of Georgia - it is the first race in the USA for the Porsche 911 GT3 R Hybrid.

The challenging 4.087 kilometre race track with its twelve corners, on which the success story of the American Le Mans Series began back in 1999, is an ideal stage for the selection of the champion. In the particularly competitive class for GT sports cars, Porsche works drivers Joerg Bergmeister (Germany) and Patrick Long (USA) have the best chances to successfully defend their title from last year at the wheel of the Flying Lizard Motorsports Porsche 911 GT3 RSR. Facing strong opposition from BMW, Ferrari and Chevrolet, they have so far taken home victory from Long Beach, Laguna Seca, Lime Rock and Mosport and tackle the finale with a comfortable points’ buffer. The situation in the manufacturer and team championships, however, looks particularly dramatic – in each classification, Porsche ranks first albeit by just one point.

“The title is virtually within our grasp. Still, we’ll be doing everything to bring home as many points as possible and to also secure the manufacturer and team titles for Porsche,” says Joerg Bergmeister. “The track is very picturesque, but very challenging. It put a lot of demands on a driver.” With a string of five victories between 2003 and 2007, he has raised the bar in Road Atlanta. Bergmeister and Patrick Long receive support from Porsche factory pilot Marc Lieb (Germany), the newly-crowned winner of the Le Mans Series (GT class). After the Sebring 12 Hour event, the Petit Le Mans race is the second longest in the American Le Mans Series with a maximum duration of ten hours. Joerg Bergmeister regards this as advantageous: “With the many pit stops, strategy and teamwork play a major role. And our Flying Lizard Motorsports boys have proven often enough that they are the best at this.”

Aside from the riveting title fight, a highlight of the season final on the classic circuit is the Porsche 911 GT3 R Hybrid. The sports car with its ground-breaking drive technology, which was on course to win the Nürburgring 24 hour race until shortly before the flag, celebrates its much-anticipated race premiere in the USA. It races in the special GTH class – with a prominent driver line-up: Porsche works drivers Timo Bernhard (Germany) and Romain Dumas (France) with Audi factory pilot Mike Rockenfeller (Germany) are eager to demonstrate the reliability and performance of the 911 GT3 R Hybrid to the US fans and to assist in perfecting its innovative technology. Earlier this year, the trio clinched overall victory at the Le Mans 24 Hours.

Whilst the Porsche 911 GT3 R Hybrid is not eligible to earn points, another title will be decided in the sports prototype class. Here as well, Porsche has good chances for victory with the RS Spyder. The US customer team, Muscle Milk Team Cytosport, which fields the successful racer from Weissach, has already celebrated a class victory this year at the prestigious 12 Hours of Sebring and underlined its potential with two overall wins at Lime Rock and Mosport. Sharing driving duties in the #6 cockpit for the season finale is an all-German line-up of Klaus Graf, Sascha Maassen and Lucas Luhr. Audi works pilot, Luhr, is no stranger to his teammates and the RS Spyder. In 2006, as Porsche works driver, he was crowned champion in the American Le Mans Series – with Sascha Maassen.

In the second Porsche 911 GT3 RSR run by Flying Lizard Motorsports, Porsche-Junior Marco Holzer (Germany) makes his debut in the American Le Mans Series. He starts in the GT class with Americans Darren Law and Seth Neiman. Contesting the series for the first time this season, the Falken Tire squad, winners of the environmental Michelin Green X Challenge award at the Elkhart Lake race, fields a 911 GT3 RSR with drivers Bryan Sellers (USA) and former Porsche-Junior Martin Ragginger (Austria). Porsche works driver Wolf Henzler (Germany) will not be competing for the rest of the 2010 motorsport season. He underwent surgery to his back and will be in recovery over the next several weeks in order to guarantee he is ready to race without any restrictions in the 2011 season.

Poised to snatch the GTC class title is points’ leader Jeroen Bleekemolen (Netherlands) with the Porsche 911 GT3 Cup. Teaming up with American Timothy Pappas, the double Porsche Supercup champion has notched up four victories so far this season. Joining forces as the third driver is his brother, Sebastiaan.

The American Le Mans Series was created in 1999 for sports prototypes and GT vehicles. The regulations correspond to those of the Le Mans 24 hour race. Nine races in the USA and Canada make up this year’s calendar. Traditional highlights are the Sebring 12 hour race and the 1,000 mile “Petit Le Mans” at Road Atlanta.

Sports prototypes and standard sports cars make up the starter field: Like at season-opening Sebring race, at the “Petit Le Mans” they are divided into five classes:
LMP1 class: Sports prototypes with up to 750 hp and a minimum weight of 900 kilograms (petrol engines) or 930 kilograms (diesel engines).
LMP2 class: Sports prototypes with around 440 hp and an 825 kilogram minimum weight (e.g. Porsche RS Spyder).
GT2 class: Slightly modified standard sports cars with 440 to 460 hp and a minimum weight of 1,125 – 1,325 kilograms (e.g. Porsche 911 GT3 RSR).
LMPC class: This newly-created class is a prototype brand trophy series for the ORECA FLM 09.
GTC class: Replacing the ALMS Challenge, this class is for brand trophy series vehicles of all manufacturers (e.g. Porsche 911 GT3 Cup).

All race cars start together but are classified separately. This ensures racing that is exciting and constantly changing. Points are awarded only for placings in each class.

Info and Pics of Porsche Motorsport/for acreditated and autorized Press/Johan Koning.
Posted by AmigosRacing/MRS GT. at 10:47