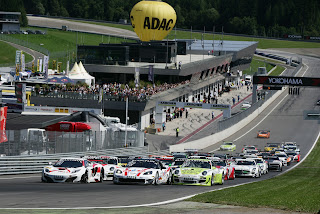 
Final sprint in Super Sports Car League: The title is to be decided over the three last weekends of the season, all within the short space of five weeks. This frenetic period starts with the third-to-last ADAC Masters Weekend at the Lausitzring. Only eleven points separate the top four supercars in the standings, and they are all different makes: Corvette, BMW ALPINA, Porsche and Mercedes-Benz. In a well-matched field, the leading bunch can also count on some tough competition from the best of the rest. For example, former F1 championship runner-up Heinz-Harald Frentzen and team-mate Andreas Wirth are aiming for their first ADAC GT Masters podium. Looking to reward their home fans are Michael and Tobias Schulze from Tagewerben in a Nissan GT-R and Jan Seyffarth from Querfurt. This will be the first time that Seyffarth shares the cockpit of his Mercedes-Benz SLS AMG GT3 with ex-Formula 1 and DTM driver Karl Wendlinger.


Ahead of the third-to-last race weekend of 2012, the situation at the top of the Formel ADAC standings is getting tighter. In the previous race at the Red Bull Ring, Swedish driver Gustav Malja took over the leadership in the championship for the first time in 2012. The Neuhauser Racing driver is, however, just two points ahead of his main title rival Marvin Kirchhöfer from Leipzig. The competition in this series is intense, with eight different drivers having taken the winner's trophy in the 15 races so far contested. At the Lausitzring, two local favourites will be particularly keen to impress: Florian Herzog (Dresden) and Hendrik Grapp (Berlin) are looking forward to the three home races for their Berlin-based Mücke Motorsport team.


The ATS Formel-3-Cup season enters the home straight at the Lausitzring. With just three racing weekends to go, Swede Jimmy Eriksson is still holding onto his lead ahead of Japanese Lotus team-mate Kimiya Sato. Their nearest challenger is Austrian Lucas Auer, who remains just 21 points behind Sato after his first ever Formula 3 victory in the previous outing at the Red Bull Ring in Austria. The nephew of ten-time F1 Grand Prix winner Gerhard Berger could, therefore, be in with a chance of finishing as Championship runner-up in his first ever Formula 3 season. Just behind Auer in the rookie class is Australian Mitchell Gilbert.


The ADAC PROCAR series also enters a decisive stage at the Lausitzring. In Division 1, Jens Weimann is leading the table on 37 points overall, after posting five double victories. However, he has some new competition at the Lausitzring - not one but two guest contestants in the shape of Swiss challenger Markus Huggler and local hero Michael Meyer in a matte black BMW 320 siE90. In Division 2, championship leader Guido Thierfelder will once again have to defend his title against his closest rivals Nils Mierschke and Ralf Glatzel. Stiff competition is also expected from young Belorussian driver Yury Krauchuk and from ADAC Sports Foundation protégé Lennart Marioneck.


The MINI TROPHY has a new leader for the ninth and tenth races of the season at the Lausitzring. Jürgen Schmarl took the overall lead during his home race at the Red Bull Ring, but the Top Five are separated by less than 50 points altogether. The MINI John Cooper Works Challenge will be won this weekend by the driver who clocks the highest speed. The prize will be the unlimited use of the road-legal version of the racing car until the next ADAC Masters Weekend at the Nürburgring. Cora Schumacher, wife of Mercedes-Benz DTM driver Ralf Schumacher, is also set to be on the starting grid. In the last two races at the Red Bull Ring in Austria, she finished eleventh and eighth respectively.


The HAIGO ADAC Historic Cup makes only its second appearance in the context of the 2012 ADAC Masters Weekend since the season opener at the Motorsport Arena Oschersleben. Drivers will be racing in single-seaters and touring cars from the Cold War era, with models from the former Soviet Bloc and other Eastern European countries lining up on the grid. Ahead of the Lausitzring weekend, the champions elect in both classes, Sebastian Dross (touring cars) and Nils-Holger Wilms (formula cars), each have a lead of five points over their closest rivals.


Slalom karting in the paddock

Great things are also expected from the promising young drivers of the ADAC Berlin-Brandenburg e.V. at the Lausitzring over the ADAC Masters Weekend. After last year's slalom karting success, the motor racing stars of tomorrow will once again be competing on a track inside the paddock. The ADAC has a long tradition of training future open-wheel racing drivers, having provided a springboard for such big names as Formula 1 drivers Sebastian Vettel, Nico Hülkenberg, Timo Glock and Nico Rosberg, as well as for DTM stars Martin Tomczyk and Ralf Schumacher whose successful careers also began in one of the various ADAC formula racing series for young drivers.