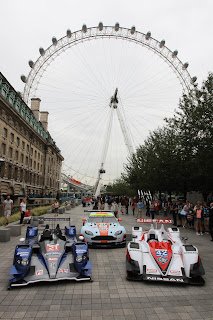 As part of the build-up to this weekend’s fourth round of the FIA World Endurance Championship (FIA WEC) at Silverstone (24 – 26 August), nine drivers, accompanied by three of the series’ highly-distinctive racing cars – including two Le Mans Prototypes – headed for one of the Capital’s most iconic landmarks, the London Eye, to mark the UK debut of the championship.

The drivers and cars attracted plenty of attention as London’s tourists were treated to a taste of FIA WEC. In addition to the drivers, two stunning Le Mans Prototype cars – the WEC Honda HPD ARX 03a (Strakka Racing) and Nissan Zytek Z11SN (Greaves Motorsport) – and the production-based, yet highly modified, Aston Martin Vantage V8 (Aston Martin Racing) were all lined up on the London Eye gangway.

While experiencing an unmatched bird’s-eye view of London’s world-famous skyline and a clear view of the Olympic Park from the 360-degree panoramic glass capsules of the London Eye, the drivers shared their thoughts ahead of the upcoming race.

Allan McNish: “It’s always exciting to be back racing in the UK and at Silverstone, especially this year with us leading the WEC right now. We’re aiming to build on that this weekend, but the competition is going to be tight – not just internally within Audi, but also with Toyota. I’m sure after Le Mans they’ll be buoyant and keen to have a good race.

“Silverstone offers everything as a circuit; from the slower, more technical in-field sections where you have to be quite delicate with the car, to the fast straights and big corners like Copse, through Becketts and the new Abbey curve - it’s a fast, hard circuit that requires a lot of commitment from both the driver and the car. It’s also a wide circuit, so there are plenty of overtaking opportunities. It can accommodate endurance racing extremely well and we should have a great race this weekend.”

Martin Brundle: “I’m really looking forward to this weekend. The last time I raced sports cars at Silverstone was 21 years ago, but it was a good race, so hopefully we can repeat that. I’ve been around the new circuit, but I’ve never raced on it, so that will be another new for me. I really enjoyed racing with my son, Alex, at Le Mans, so to get a chance to race with him again at Silverstone is fantastic.

“I think the race itself is going to be tough. Physically, I think it’s going to be more challenging for me than Le Mans. While I did eight and a half hours at Le Mans, they’ve got some long straights there; Silverstone has got some massively fast corners, which will be more of a challenge for me, but I’m in pretty good nick, so I’m looking forward to it. With 16 cars I think the LMP2 Class will be the most competitive, and it will be really hard to get on the podium, but that’s what we’ll be aiming for.”

Alex Brundle: “I’m really looking forward to racing on home soil this weekend. We look a strong prospect and it’ll be great to be in the car with my old man again; it’s always an enjoyable experience and we make a great team. Anyone who’s involved in British motor sport feels something special when they drive through the gates at Silverstone. It is the home of British motor racing and somewhere I feel very much at home. I love the circuit; Copse, Maggots and Becketts are some of the best corners in the word. Hopefully we can finish on the podium and give the home fans something to cheer about.”

Darren Turner: “Silverstone is very much my home circuit, as I only live 10 minutes down the road. We’ve had a fairly long break since Le Mans, so I think all of the drivers are itching to get back in the cars now and get racing. I really enjoy the new circuit layout; Bridge corner’s gone, which was one of the highlights, but there are plenty of new corners that are equally as good. There are some great combinations of corners and it’s pretty wide, so there should be plenty of opportunities to overtake and pass. The new Wing complex also looks fantastic; it’s just an amazing international circuit to race at. I can’t wait.”

Danny Watts: “I’m very excited about our home race. I worked at Silverstone as an instructor and at the karting track for a number of years, so it’s a circuit that’s close to my heart. More importantly it’s the mid-point of the championship, so it’s a good opportunity to score a few points on a circuit we know well. The circuit lends itself to the LMP1 category that we’re competing in, with a real mix of fast straights and corners, to slower, more technical sections, so set-up and balance of the cars will be important. It should be a great weekend.”

Karun Chandhok: “Until the WEC goes to India I suppose this is my home race; I’m looking forward to it. Silverstone’s a great circuit; I’ve raced there in several categories over the years, worked there and only live five miles away, so it’s always a pleasure to race there. Silverstone is all about high speed and these cars produce a lot of down force, so it’s quite enjoyable to drive on the quicker circuits. We need to be realistic about our chances, as we have done all year, but we’ll go to Silverstone and give it our best.”