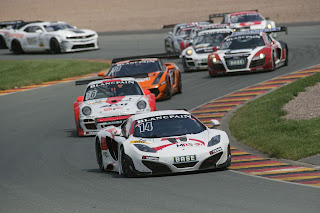 
Established drivers, newcomers seeking to make a name for themselves, speedy local talents and seven corners that place huge demands on man and machine: there are no fewer than ten Austrians competing in the ADAC GT Masters (10th - 12th August) on their home circuit, the Red Bull Ring at Spielberg. The Austrians are the second-largest national contingent contesting the 'Super Sports Car League' after the Germans themselves.

The local man with the shortest route to the Red Bull Ring is Gottfried Grasser (33, Grasser Racing Team) of Knittelfeld - just five minutes from door to door. "I'm feeling quite nervous," comments Grasser ahead of his home race, despite having teamed up with one of the big names in the sport. Andrea Piccini (33, Italy), a member of the winning trio from the 24 Hours of Spa in Belgium a few days ago, will be sharing the driving of the Lamborghini Gallardo. "With Andrea on board, we think that a qualifying place in the Top 15 is realistic. We've had our new Lamborghini for only one race so far, but we're making good progress with it."

Grasser isn't the only local driver in the starting line-up. Hari Proczyk (36, Heico Motorsport), who lives in Cologne but originally comes from Sankt Margarethen, also a stone's throw from the Red Bull Ring, and team-mate Dominik Baumann (19) from Rum in Tirol are currently the best-placed Austrian pairing in the championship. In last year's equivalent fixture, the Austrian duo had the satisfaction of saluting their home fans from the podium. Baumann and Proczyk would certainly like a repeat of that triumph this season. "With all the new drivers, teams and car makes, the level of competiveness in this year's ADAC GT Masters is higher than ever before," says Baumann. "We are hoping for a decent result in qualifying to have good prospects for the two races."

Sharing a Mercedes-Benz SLS AMG with Florian Stoll (31, Rickenbach) is Daniel Dobitsch (28, kfzteile24 MS RACING Team) who has a personal connection to the region. "My father grew up in Styria, so we are expecting a lot of friends and sponsors to turn up this weekend at the Red Bull Ring," says Dobitsch, who has since moved to South Tyrol where he works in the hotel trade. Dobitsch is looking forward to the race both for the support he will be receiving and for the thrill of returning to the Spielberg circuit: "The track is great. Because of its location, it has some remarkable characteristics. There are big differences in elevation and three fast full-throttle sections; that's what constitutes the special charm of the Red Bull Ring."

Philip Eng (21, GT Racing MRS) drives one of the most spectacular and distinctive cars in the ADAC GT Masters. The young talent from Salzburg, who has already tested a Formula 1 car for Williams, partners Christian Ott (Altdorf) in a McLaren MP4-12C; they will be aiming to build on the excellent form they have shown in recent races. Two more Austrians in the starting line-up of more than 40 cars are Mario Dablander (24, Callaway Competition) from Ötztal-Bahnhof sharing a Corvette with Swiss driver Remo Lips (30) and rally driver Peter Ebner (40, Team rhino's Leipert Motorsport) from Wolfsberg sharing a Lamborghini Gallardo with Raffael Bader (24), also of Switzerland.

For Porsche ace Martin Ragginger (24, FACH AUTO TECH) from Wals near Salzburg, the priority is team-mate Swen Dolenc's (44, Maulbronn) championship campaign. Ragginger will be battling for points in the amateur stakes in the service of Dolenc who currently heads the standings in this classification. Ragginger put in a strong performance in qualifying at the Nürburgring when he secured a position on the front row of the grid for their Porsche 911. The subsequent P5 finish was their best of the season. "The Red Bull Ring has long straights and our Porsche 911 has good top speed, so I'm confident that we are in with the chance of a good result," says Ragginger ahead of his home race.

Stuck brothers hoping to turn their season round

Ferdinand (21) and Johannes Stuck (25, Young Driver AMR) have already experienced the sweet taste of winner's champagne at their home venue; in 2011, the sons of racing legend Hans-Joachim Stuck won one of the races at the Red Bull Ring and finished the season as ADAC GT Masters runners-up. In their new Aston Martin V12 Vantage, the Stuck brothers think it is now time that they got back to winning ways. "We want to take the opportunity to turn our season round with a good performance at the Red Bull Ring," says Johannes. "The track is characterised by its very fast straights followed by hard braking points. Qualifying will be crucial, because I'm expecting the Red Bull Ring to be the closest race of the season."

Gottfried Grasser is also predicting an exciting race: "The Red Bull Ring will be more of a nail-biter than ever before. With only seven corners, the layout is by no means complicated, so we can expect the field to stay more tightly bunched than usual."

Fans can get a foretaste of the ADAC Masters Weekend at the Red Bull Ring on Wednesday 8th August in Fohnsdorf. From 3pm onwards, the Arena am Waldfeld shopping centre will be hosting racing cars from the ADAC GT Masters and its support series (Formel ADAC, ATS Formula 3 Cup, ADAC Procar and MINI Challenge).

The Super Sports Car League will be represented by the BMW ALPINA B6 of Lunardi and Martin. Also making a guest appearance will be the Stuck brothers' Aston Martin V12 Vantage and the McLaren MP4-12C of Philip Eng. But probably attracting most attention will be local favourite Gottfried Grasser in his Lamborghini Gallardo.

At 5.30pm, Ferdinand und Johannes Stuck, Gottfried Grasser, Philip Eng und Christian Ott will make themselves available to answer questions from the fans and to sign autographs. The highlight of the day comes at 6.30pm when the super sports cars perform demo laps on a specially marked-out track. Also present will be a 700bhp Toyota Camry from the American NASCAR series. Admission to the Showrun in Fohnsdorf is free of charge.

ADAC GT Masters on TV: All 16 races of the ADAC GT Masters are broadcast live at 12.15pm on Saturdays and Sundays in Germany, Austria and Switzerland on free-to-air TV channel kabel eins. Sports channel SPORT1 will feature highlights of the ADAC GT Masters from the Red Bull Ring in the ADAC Masters Weekend Magazine on 18th August at 12.15pm. In addition, live timing from all practice sessions and races to supplement live TV broadcasts can be found at www.adac-gt-masters.de.