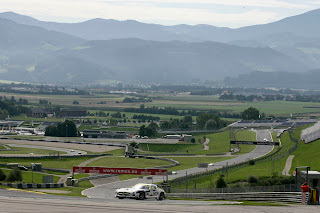 
The ADAC GT Masters starts the second half of the season at full throttle on the weekend of 10th - 12th August at the Red Bull Ring in Austria. Against a stunning Alpine backdrop, more than 40 super sports cars with 12 different badges on their grilles will be racing around the fastest circuit on the ADAC GT Masters calendar. It is the only time during the season that the Super Sports Car League ventures south of the border, and there will be no fewer than nine Austrians vying for trophies and points on home soil.

Leaders Lunardi and Martin under pressure

Defending champions Dino Lunardi (33, France) and Maxime Martin (26, Belgium, ALPINA) in their BMW ALPINA B6 go into the second half of the season leading the standings. In the last race before the short summer break at the Nürburgring, the ALPINA duo snatched back the championship lead with their second win of 2012. Maxime Martin is expecting the Red Bull Ring to be a tough proposition: "I would quite like it to rain, because we reckon that should give us a better chance. The Red Bull Ring makes very heavy demands on the brakes, and in tests there, we discovered that they need to be very accurately balanced." Dino Lunardi is also predicting a difficult weekend: "We're going to need the very best of luck in Austria to defend our championship lead."

The closest pursuers of the pistachio-green BMW ALPINA B6 GT3 are Diego Alessi (40, Italy) and Daniel Keilwitz (23, Villingen) in their Callaway Competition Corvette and the pairing of Sebastian Asch (26, Ammerbuch) and Maximilian Götz (26, Uffenheim, kfzteile24 MS RACING team) in their Mercedes-Benz SLS AMG. Alessi and Keilwitz think that two good results in Austria should be enough to leapfrog Lunardi/Martin and take them back to the top. A bright start to the season for Asch and Götz culminated in two pole positions at the Nürburgring; now they are intent on claiming their first win of 2012 in Austria. Also a force to be reckoned with is the partnership currently placed fourth in the standings, Christian Engelhart (25, Kösching / Team Geyer Weinig - Schütz Motorsport) and Nicky Tandy (27, GB) in their Porsche 911, especially with Engelhart treasuring fond memories of victory in his ADAC GT Masters debut race at the Red Bull Ring last year.

A strong home-grown contingent of drivers will be targeting a podium finish in front of their own supporters, with no fewer than nine Austrians competing at the Red Bull Ring. The most successful of them so far this season are the Mercedes-Benz SLS AMG pair of Dominik Baumann (19) from Rum in the Tyrol and Hari Proczyk (36, Heico Motorsport) who comes from the nearby village of Sankt Margarethen. "As long as we can get a decent result in qualifying, anything is possible in the race," says Baumann. "So far this season, we've only started from midfield, but even so, we have consistently finished in the points. If we can qualify among the Top Ten at the Red Bull Ring, we have good prospects for both races."

One driver who certainly had a good grid position in the last race was Martin Ragginger (24, FACH AUTO TECH). The Porsche 911 man from Wals started on the front row at the Nürburgring and, together with current amateur championship leader Swen Dolenc (44, Maulbronn), achieved his best result of the season with a fifth-place finish. Ragginger is sounding upbeat: "The Red Bull Ring takes a lot out of the brakes and calls for good top speed, plus there are four very fast corners; this track should be a good compromise for our Porsche."

Gottfried Grasser from nearby Knittelfeld (33, GRT Grasser Racing Team) has recruited a star co-driver for his home race: he will be sharing his Lamborghini Gallardo with ex-Formula 1 test driver Andrea Piccini (33) from Italy who was a member of last weekend's winning trio in the Total 24 Hours of Spa. Looking to score his first championship points is McLaren MP4-12C driver Philipp Eng (21, GT-MRS Racing) from Salzburg. Also hoping for a Top Ten finish are Daniel Dobitsch (33), who lives in South Tyrol, and Florian Stoll (31, Rickenbach, MS kfzteile24 RACING team) in their Mercedes Gullwing. The Stuck brothers, Ferdinand (21) and Johannes (25, Young Driver AMR), driving an Aston Martin V12 Vantage will be aiming to get their season back on track. The sons of Austrian racing legend Hans-Joachim Stuck recorded a victory at the Red Bull Ring last year, so the 2011 ADAC GT Masters runners-up will be hoping for a change of fortune and a return to trophy-winning ways. Making his second start of the season will be Mario Dablander (24) from Ötztal-Bahnhof sharing the cockpit of a Corvette with Remo Lips (30, Switzerland, Callaway Competition).

In the amateur stakes, all eyes will be on Swen Dolenc in a Porsche and Kristian Poulsen (36, Denmark, Young Driver AMR) in the Aston Martin V12 Vantage. At the Nürburgring, Dolenc surged to the top of the table after finishing ahead of all the other amateur competitors; in Austria, his Danish rival will be looking to seize back the initiative. But both will need to keep an eye on Carsten Tilke (28, Munich, Prosperia uhc speed), who shares an Audi R8 with former champion Christian Abt (45, Kempten), and on Corvette driver Toni Seiler (54, Switzerland, Callaway Competition). Tilke had to miss out on the Nürburgring weekend and will therefore be keen to make up lost ground in Austria. Meanwhile, Seiler will be intent on claiming his first win of the season to narrow the gap at the top.

Showrun in Fohnsdorf on Wednesday

The ADAC will be whetting the appetite of local fans for the forthcoming ADAC Masters Weekend with a 'Showrun' on Wednesday 8th August at Fohnsdorf. From 3pm onwards, the Arena am Waldfeld shopping centre will be buzzing with excitement as racing cars from the ADAC GT Masters and its support series (Formel ADAC, ATS Formula 3 Cup, ADAC Procar and MINI Challenge) go on display.

The Super Sports Car League will be represented by the BMW ALPINA B6 of Lunardi and Martin. Also making a guest appearance will be the Stuck brothers' Aston Martin V12 Vantage, a McLaren MP4-12C and a Porsche 911. But probably attracting most attention will be local favourite Gottfried Grasser in his Lamborghini Gallardo.

At 5.30pm, the drivers will make themselves available to answer questions from the fans and to sign autographs. The highlight of the day comes at 6.30pm when the super sports cars perform demo laps on a specially marked-out track. Also present will be a 700bhp Toyota Camry from the American NASCAR series. Admission to the Showrun in Fohnsdorf is free of charge.


ADAC GT Masters on TV: All 16 races of the ADAC GT Masters are broadcast live at 12.15pm on Saturdays and Sundays in Germany, Austria and Switzerland on free-to-air TV channel kabel eins. Sports channel SPORT1 will feature highlights of the ADAC GT Masters from the Red Bull Ring in the ADAC Masters Weekend Magazine on 18th August at 12.15pm. In addition, live timing from all practice sessions and races to supplement live TV broadcasts can be found at www.adac-gt-masters.de.


Further information available at www.adac.de/motorsport and www.adac-gt-masters.de
Posted by AmigosRacing/MRS GT. at 01:10