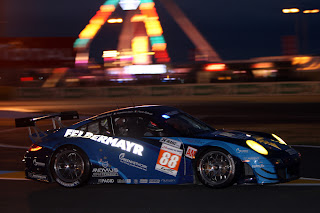 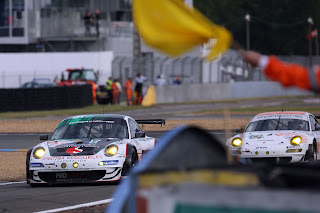 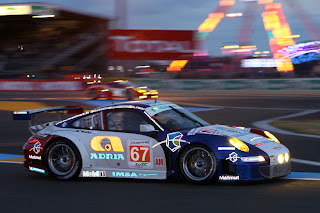 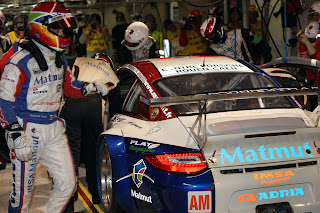 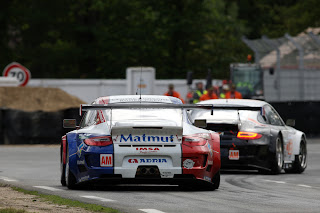 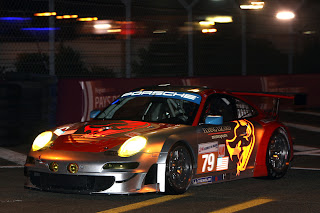 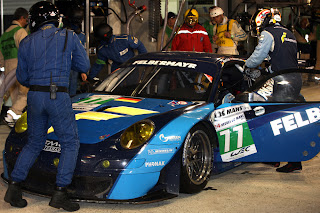 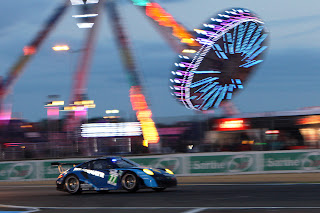 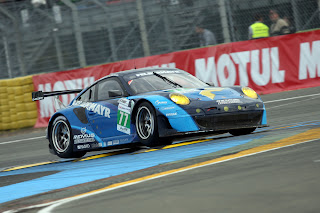 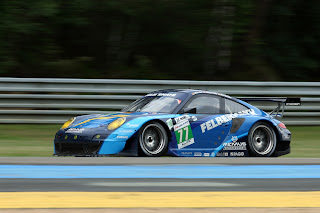 Stuttgart. The Porsche 911 GT3 RSR fielded by Flying Lizard Motorsports takes off into the Le Mans 24 hour race at 3 p.m. on Saturday from the front of the GTE Am class. No one on Thursday managed to come near Porsche works driver Patrick Pilet’s top time from Wednesday’s first qualifying session. At the 80th running of the long distance classic in the Sarthe, the Frenchman shares the 911 of the US customer team with Americans Seth Neiman and Spencer Pumpelly.

“Right from the start we were pleased with our car,” said Patrick Pilet. “This best time underlines that we at the top of our class. Now we just have to try and turn our good qualifying performance into a good race result.”

In the GTE Pro class, Porsche works drivers Marc Lieb (Germany), Richard Lietz (Austria) and Wolf Henzler (Germany) netted the sixth spot in the Porsche 911 GT3 RSR run by Felbermayr-Proton. Directly behind them in Flying Lizard Motorsports’ 911, their factory pilot colleagues Joerg Bergmeister (Germany), Patrick Long (USA) and Marco Holzer (Germany) take up the race from seventh on the 13.629 kilometre Circuit des 24 Heures, one of the world’s oldest and fastest race tracks with almost 75 percent of a lap taken at full throttle.

“It quickly became clear that we couldn’t match the pace of the fastest and we couldn’t improve on Wednesday’s lap times,” stated Richard Lietz. “So we used Thursday’s qualifying to prepare for the race. 24 hours is very long, a lot can happen in this time. We can only try and get through without any problems. We’ll just have to wait and see with the rest.” Marco Holzer added, “We worked on our set-up for the race and tried out several things so that we have an optimal car for the start on Saturday. The race is very long. Our main priority will be to reach the flag and not make any mistakes. But in Le Mans this is anything but easy.”

“The qualifying result in the GTE Pro class matches the expectations and, because of the Balance of Performance system, is simply a result of the teams concentrating on finding a sensible race set-up,” said Porsche Head of Motorsport Hartmut Kristen. “At a 24 hour race, the qualifying results are not that decisive. Ultimately, it’s about spending lots of time on the track and little time in the pits. But still, we’re of course thrilled about the top qualifying time and the other great results in the GTE Am class.”


This is the World Endurance Championship
Sports prototypes and GT vehicles contest the World Endurance Championship, for which double points are awarded in Le Mans. They are divided into four classes that start together but are classified separately:
LMGTE Pro class: This class is reserved for slightly modified standard sports cars with 440 to 500 hp and a minimum weight of 1,245 kilograms (e.g. Porsche 911 GT3 RSR).
LMGTE Am class: Like the LMGTE Pro, but the regulations stipulate that only last year’s cars are eligible and there must be no more than one professional driver per vehicle.
LMP1 class: Sports prototypes with up to 550 hp and a minimum weight of 900 kilograms.
LMP2 class: Sports prototypes with around 440 hp and a 900 kilogram minimum weight.