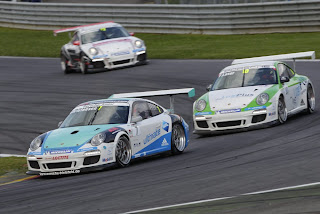 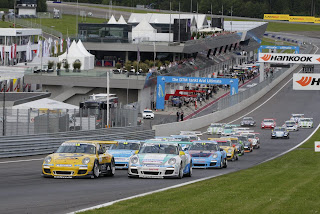 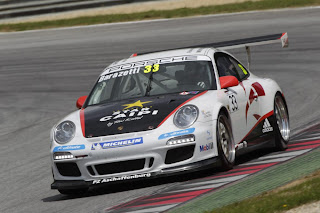 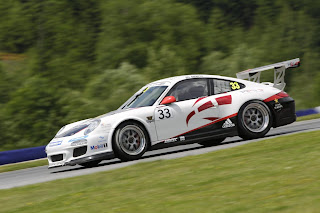 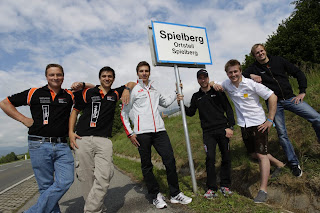 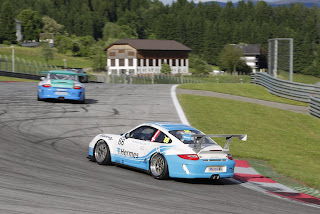 The result of the race was surprising because the three top drivers who had actually finished the race in positions two, four and five were relegated down the classification list. The reason: Sean Edwards (Great Britain, Team Deutsche Post by tolimit), Jaap van Lagen (Netherlands, FE Racing by Land-Motorsport) and Edward’s teammate René Rast (Germany) plus three other drivers had not sufficiently reduced their speed in a dangerous spot under yellow and as a result were handed a 30 second penalty.

Even without the time penalty, the race result would have been reason enough for celebration for Porsche Junior Bachler. After a faultless and spirited race on the challenging 4.326 kilometre rollercoaster circuit, the 20-year-old lay within striking distance of the leader at the flag in sixth. In winter, Bachler won a two-tiered selection evaluation against worldwide competition and received one of two coveted “scholarship places” as a Porsche Junior in the Carrera Cup Deutschland. The Austrian had launched his career classically at the age of nine in karting. In 2007 he put in a brilliant showing in the Formula Lista with five victories and the Junior title. Two years later he secured vice-championship honours with ten podium places and two victories in the ADAC Formula Masters. Last season, he finished the ATS Formula 3 Cup in third overall after clinching two wins.

Porsche Junior Michael Christensen seemed pleased with his sixth place. Previously on the Lausitzring, Christensen had turned heads with his third in both qualifying and the race. Driving for Konrad Motorsport, the talented Danish youngster coped well with the Spielberg track during free practice. However, the decisive qualifying did not go as well and he took up the race from twelfth in his 450 hp 911 GT3 Cup based on the street-legal lightweight 911 GT3 RS sports car.

The drivers on places seven to ten were satisfied with their positions. For all of them, their results at race six were the best so far this season: Philipp Frommenwiler (Switzerland, Attempto Racing) came seventh, Felipe Fernandez Laser (Germany, Farnbacher ESET Racing) secured eighth. Austria’s Matthias Gamauf (Marschall Goebel Racing) was thrilled with ninth at this home race, and Tomas Pivoda (Czech Republic, Konrad Motorsport) claimed the last top ten spot.

The seventh race of the season starts tomorrow at 9.05 hrs and can be seen in high quality live on the official Porsche website (www.porsche.com) – with editorial clips prior to the actual live-streaming, live-timing and a commentary in German and English. On Sunday evening, TV station Sport1 broadcasts the Carrera Cup from 20.30 hours. On 4 June, the Monday after the race weekend, news station N24 televises the 30-minute “Porsche Carrera Cup Magazin” at 18.30 hours. Sport1 airs Carrera Cup highlights on Saturday 9 June, from 17.00 to 17.30 hours.

Norbert Siedler (winner): “My start was excellent but Sean nipped over in front of me otherwise I would have got past. Then over a couple of laps I pushed him a bit so I could overtake him fairly. Towards the end things became a little more difficult for me because I got oversteer. But in the end, 20 points, winner, it doesn’t get better than that.”

Kévin Estre (second): “I got away cleanly, overtook Philipp Eng and moved into third. I was able to hold on to the position despite having van Lagen pushing from behind. The track heading onto the finish straight was really dirty. I often went off onto the grass – it was like rallying. I gained a spot because of Sean’s penalty and I’m now leading the points. It’s my first year in the Carrera Cup so that’s just fabulous. But the season is still long.”

Klaus Bachler (Porsche Junior, third): “I don’t quite know what to say. It’s an unbelievable feeling to finish in third – especially at my home race after a difficult start to the season. The race was great. My start was perfect and the first two laps ran well. I was already in sixth. There were some great duels, particularly with Clemens Schmid. I had to really fend him off but I did it. In the end I profited from my colleagues’ penalties.”

Michael Christensen (Porsche Junior, sixth): “My race was fine once everyone calmed down a little after the first few laps. Then I had a little luck on my side when I moved up the classification because of others mistakes. I’m pleased.”